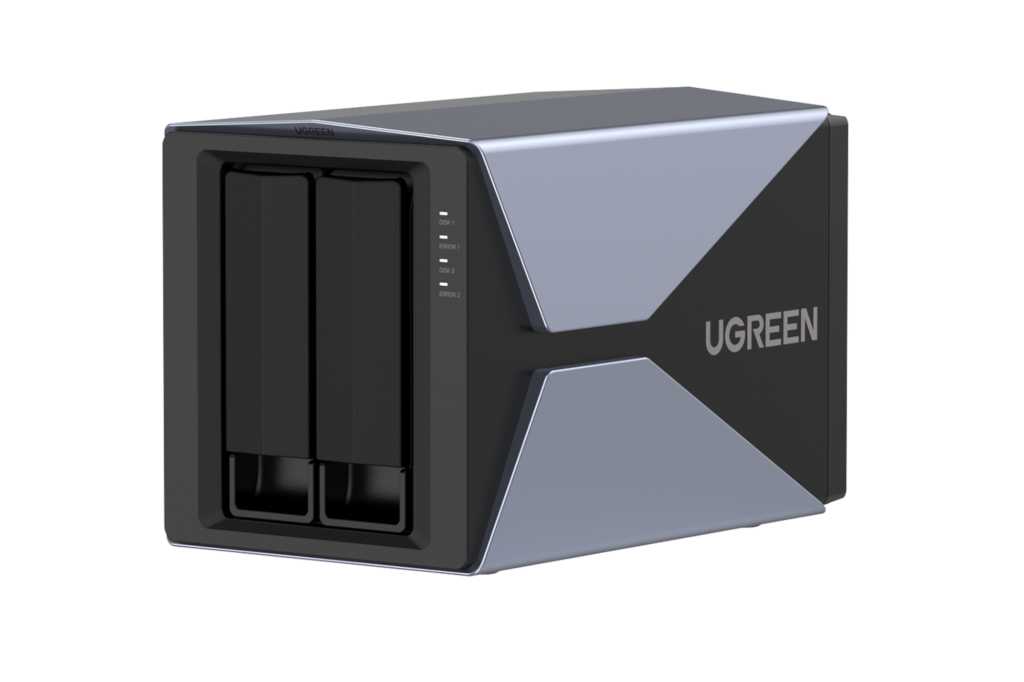 UGreen
At a glance

UGreen’s CM335 is a good performer and one of the more affordable dual-bay 3.5-inch hardware RAID boxes on the market.

Established Mac-centric vendors have lately been forsaking hardware RAID for the more versatile but CPU cycle-stealing software variety. Hence our interest in UGreen’s CM335 hardware RAID enclosure, which tips the monetary scales at a svelte $149 yet won’t tax your computer’s CPU while doing its business. It’s a good performer, albeit requiring high-quality cables.

The CM335 is inexpensive for what it is, though it sometimes shows. The construction is all plastic but still manages to strike a reasonably elegant profile on the desktop. Being largely plastic also makes it light at around five pounds, although at 8.4-inches deep, by 5.3-inches wide, by 5.7-inches (all approximate measurements).

But the lack of heft can also translate to a somewhat insubstantial feel, at least if you’re populating it with 2.5-inch SSDs or HDDs. 3.5-inch hard drives, being significantly heavier, add the gravitas of feel that might otherwise be lacking.

On the front of the enclosure are the status lights (power/drive activity), and the drive bays featuring non-locking, lift-handle, plastic slide-out pressure-fit trays. The trays use quick-fit, removable plastic mounting rails (long tabs with pins that fit into the hard drive screw holes).

You’ll need to remove one of the rails to mount a 2.5-inch drive, as the front pin prevents proper alignment. Keep the rails around as they’re very handy for quickly installing HDDs should you ever switch. With 2.5-inch media installed, there’s plenty of room inside the drive bay to stow them away.

UGreen thoughtfully provides enough screws for four drives (there are only two bays) as well as a small screwdriver should you be lacking. Nice touch. Tip: I’ve found that using a soft pencil on the contact areas of plastic junctions serves well as a non-oily lubricant.

On the back of the CM335 are the power jack (a 1.2 amp/12-volt adapter is included), momentary power button, recessed reset button, single USB Type-C port (5Gbps), and the dual dip switch used to configure the RAID mode. The options are RAID 0 (striped/fastest), RAID 1 (mirrored/single drive speed), Span (concatenated), and PM (Port Multiple) which treats the two drives as separate logical units.

The dip switch is a dead giveaway that the box is hardware RAID. i.e. the RAID is handled onboard by a controller chip. We’ve been seeing a lot of newer enclosures (even smaller two- and four-drive units) that rely on the operating system to provide RAID functionality. Software RAID is more versatile when you have more than two drives but also tends to decrease performance under heavy load.

On a dedicated file server, software RAID such as that offered by ZFS, UnRAID, etc. is fine, and indeed preferable. However, on a client computer doing a whole host of other CPU-intensive tasks, it’s less than ideal under heavy load.

Being USB 5Gbps, the UGreen theoretically has plenty of bandwidth for both SATA HDDs and SSDs–around 550MBps sequential throughput under optimal circumstances. The CM335 came close to that (approximately 470MBps on the PCWorld storage test bed) in our tests using two SSDs operating individually as well as in RAID 1.

By way of comparison, TerraMaster’s d2-310 managed 510MBps in RAID 0. For some reason, as you’ll see below, the CM335’s read performance with SSDs actually suffered somewhat in RAID 0 and there wasn’t the usual jump in write speed offered by splitting/striping data across two drives.

Results on my 2015 iMac were lower than on PCWorld’s test bed, but that’s nearly always the case with USB storage; 320 to 370MBps is a good number for tests on my machine. You might do better on a newer Mac, but not a whole lot. For some reason, Macs don’t seem as facile with USB.

As the CM335 is a very good fit for hard drives, I also tested with two 12TB HDDs in both RAID 1 and 0. In RAID 0, the box is almost as fast as it was with SSDs in terms of sequential throughput, albeit with comparatively pathetic seek and small file performance. Nature of the beast. Regardless, there’s something about seeing a 24TB logical drive on my desktop that’s still impressive.

Blackmagicdesign’s Disk Speed Test tests only sequential throughput, which was quite good with the CM335, even with hard drives as shown below. Note these were top-of-the-line WD and Seagate HDDs.

I do have to warn you to use the top-quality cable UGreen provides or another of similar character. Performance dipped mightily to 35 to 40MBps with longer, thinner (and cheaper) USB cables. I only warn you so you don’t freak if you see these slothful numbers using a cable you might already have attached.

AmorphousDiskMark (a CrystalDiskMark port for the Mac) does test random, small file ops which are always far slower with hard drives, which need to shuttle a read/write head around platters. Compare the RND4K numbers to those in the CrystalDiskMark 8/PC image at the head of this section to see how much slower HDD small file transfers are than an SSD’s.

Our test unit suffered from a noisy fan bearing. UGreen seemed surprised about the issue so we’ll assume a one-off defect or shipping damage. There’s a 30-day return policy if you purchase the CM335 on Amazon, which is actually the only place I’ve seen it for sale.

The CM335 is decently speedy, affordable, easy to set up and despite the all-plastic construction, doesn’t look out of place sitting next to or behind a Mac. A good solid storage box for a reasonable price.