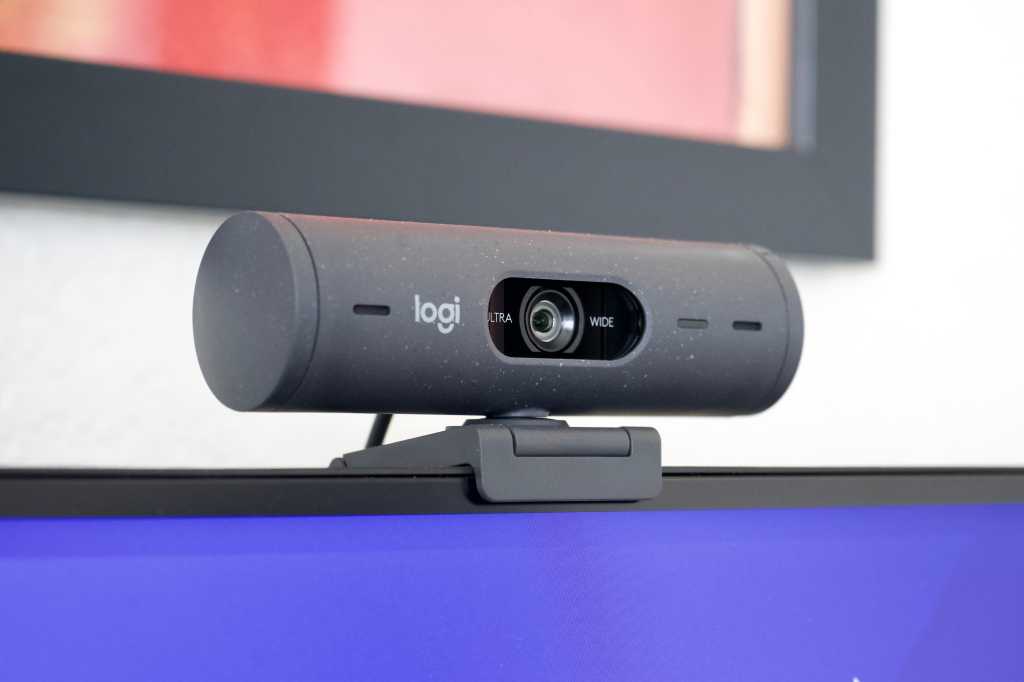 Jason Cross / Foundry
At a glance

Focused on video calls for work, the Logitech Brio 500 is meant to be moved around. Video quality is acceptable, but not a big upgrade over the very latest built-in Mac webcams.

Logitech’s latest Brio webcam is a significant step down in quality from the top-of-the-line Brio 4K, but offers some nice features for those that want a webcam primarily for work video meetings rather than to be the next Twitch streaming star.

If you’ve got a brand-new MacBook or iMac, you might find that the video quality out of the Brio 500 isn’t much of an upgrade–Apple has finally delivered webcam quality you can live with (though we feel it should do better). For any Mac prior to the M1 generation, the webcam quality leaves a lot to be desired, and something like this will definitely make you look better.

Aside from video quality, the wide field of view, auto-tracking feature, and Show mode to show your desk are welcome features for anyone. And a built-in physical privacy cover ensures that nobody can peek in on you when you don’t want them to.

A design meant to move

The Brio 500 is not meant to lock in place. It’s got a handy monitor mount clamp with a somewhat sticky pad to keep it steady, but the camera itself just has a round peg on the bottom (which screws into the standard camera mount thread) that snaps magnetically into a round “dimple” on the mount.

This makes it trivial to pop off the camera and move it to show something as needed. But I don’t really find I have to do that a lot, and the design has a critical flaw in that it allows the camera to easily swivel left and right in its magnetic dock. It doesn’t make much force to turn the camera left and right, which it would sometimes do just from tugging gently on its USB-C cable as I adjusted my monitor. A quick turn of the right side of the webcam closes a physical cover in front of the camera lens, guaranteeing your privacy.

On nifty trick: In the Logi Tune software, you can flip a toggle for “Show Mode.” When this is enabled, the camera can detect when it is pointing downward past a certain angle and will flip the video around 180 degrees. It’s meant for you to angle the camera down to show something at your desk, giving viewers the same right-side-up view you have. The Desk View feature in Continuity Camera (coming in macOS Ventura) does something similar, though it provides two views–your desk and your face. (It also requires an iPhone to act as a dedicated webcam.)

The camera is a wide 90-degree field of view, with options to digitally crop in to a more typical 78 degrees or a tight 68 to capture just your face. You lose a bit of detail as you zoom in digitally, though. The Right Sight feature can automatically pan around to keep your face in view, a bit like Apple’s Center Stage feature on iPads and the Studio Display. This has become a pretty standard feature on many webcams.

The built-in stereo microphone produces pretty good sound, as these things go, but a headset is usually the way to go for audio.

If there’s a sore spot in the video quality, however, it’s color and dynamic range, not resolution or frame rate. Most video conferencing apps for business don’t go past 1080p and 30fps anyway. Though the Brio 500 does support HDR, and there’s a pretty big difference when you turn it off in the Logi Tune software, I’ve still seen better dynamic range in other premium webcams. White balance is a bit off, too–in my home office, it wasn’t unusual for my skin to have an unnaturally red hue. Apple’s built-in camera on the latest M2 MacBook Air seems to provide a better dynamic range and more natural skin tones, but old Macs’ webcams don’t fare nearly as well.

Should you buy a Logitech Brio 500?

The biggest sticking issue with the Brio 500 is the price. The $130 price a lot for a webcam that maxes out at 1080p and 30fps. It’s almost twice the price of Logitech’s own C920, not to mention competing cameras. The wider field of view and niceties like Show Mode are welcome, but dynamic range and skin tones should be better at this price–you may as well spend $199 to get the Brio 4K.

If you’ve got a Mac circa 2020 or earlier, this will likely represent a significant improvement over the built-in camera (and the older your Mac, the bigger the boost). But the latest Macs finally have decent webcams, and they provide better color and dynamic range at a similar resolution. You’d be paying for the wider field of view and Show Mode, and not much else.

We look at a selection of web cams in our Best webcams for Mac round up.