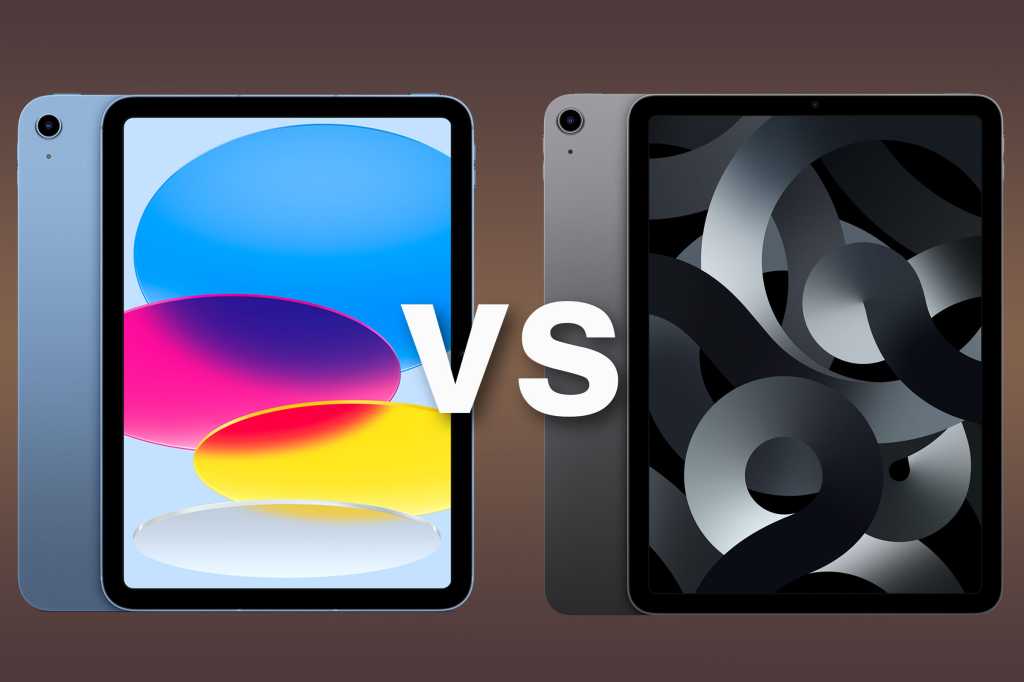 Apple just introduced a new 10th-generation iPad and M2 iPad Pro, but still sells the 9th-gen iPad. Throw in the iPad mini and storage sizes and we’re in an “Oops! All iPads” situation where it can be hard to figure out which one to buy.

That confusion is perhaps most pronounced when deciding between the new 10th-gen iPad and the iPad Air. The 10th-gen model takes on the physical characteristics of the iPad Air, with a larger display, flat sides, and Touch ID in the side button. It’s also considerably more expensive than the 9th-gen iPad, closing that wide gap in price between Apple’s entry-level and midrange tablets.

Despite the visual similarities, there are significant differences between them. If you’re considering a mid-tier iPad, perhaps this article will help you decide whether you should get the new 10th-gen iPad or the iPad Air. (If it’s the 9th gen iPad you are considering read our 9th gen iPad vs iPad Air article).

One of the easier ways to get a feel for how these tablets are different is to look at their specs side-by-side.

As you can see, despite their physical similarities, there are quite a few differences, some more significant than others. 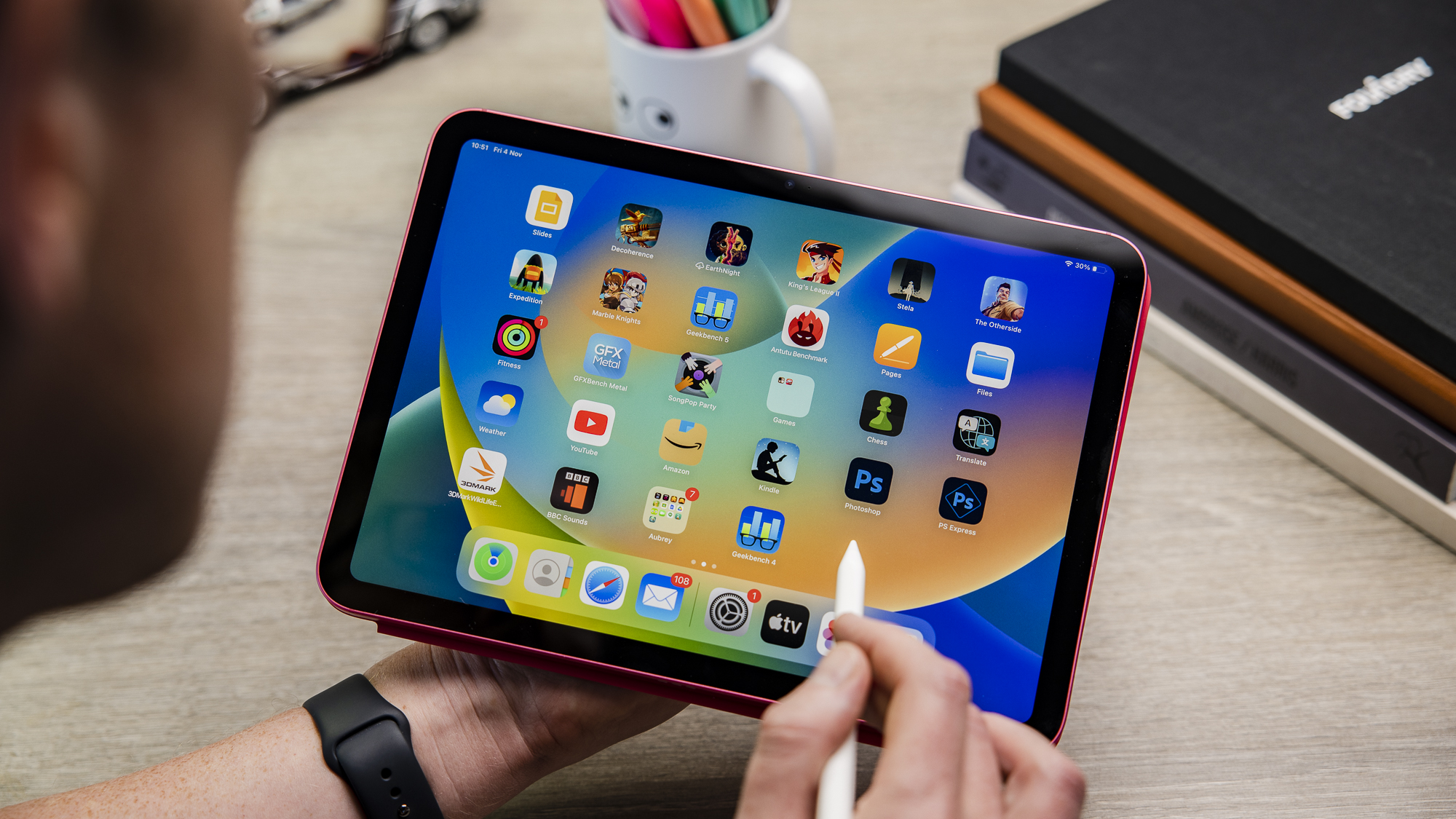 Probably the biggest difference is in the processor. While the M1 processor in the iPad Air is based on the same general architecture as the A14, it’s way more powerful. It’s got two more high-performance CPU cores, double the GPU cores, more RAM, and media engines to speed up the encoding of H.264 and HEVC video.

You may not need all that, of course. If you primarily use your iPad for surfing the web, taking notes, email, social media, and the like, the M1 is overkill. If you create a lot of digital artwork in apps with custom brushes or do video editing, you will probably appreciate the M1’s extra muscle.

It’s also worth noting that Stage Manager, a new multitasking feature in iPadOS 16.1, is only available on recent iPad Pro models and the iPad Air with an M-series processor. We’re not very big fans of the new feature–it needs a lot of work–but if it eventually becomes great it will probably remain out of reach for the 10th-generation iPad.

For all intents and purposes, the 10th-gen iPad and iPad Air have the same design. When side by side, you’ll see that the iPad is slightly bigger and slightly heavier than the iPad, but you won’t notice either. They both have a thin-bezel uniform design with flat edges and a Liquid Retina display. They also both come in a variety of colors, though the 10th-gen iPad’s hues are significantly brighter than the iPad Air’s shades.

The displays on the 10th-gen iPad and iPad Air are the exact same size, with the same resolution, and brightness. And both support True Tone. So what’s different? For one, the color gamut of the 10th-gen iPad is sRGB, while the iPad Air has a wider P3 color gamut, so the colors in photos and some videos may be a little richer and more vibrant. The iPad Air’s display also has an anti-reflective coating.

Both iPads have identical rear and front cameras with the same resolution (12MP), aperture (f/1.8), and supported features (Smart HDR 3, Panorama, Burst mode, etc.). However, the 10th-gen iPad has the edge here. Where the front camera on the iPad Air is located along the short side like all other iPads, so it’s at the top when you hold your iPad in portrait orientation, the 10th-gen iPad is the first to position the front camera along the long edge, so it’s centered when your iPad is docked or in a keyboard case.

We think this is a great idea and something for which we’ve been asking for years.

You’ll find almost identical wireless capabilities in these two iPads. Both have dual-band 802.11ax (Wi-Fi 6) support with a throughput up to 1.2 Gbps. If you buy the cellular-enabled version, both support 5G, but only the sub-6GHz bands.

In other words, there are no practical differences in wireless capabilities today, but the 10th-gen iPad is just slightly more future-proof.

Both models have a USB-C port for charging and data transfers, though they’re not quite the same. The 10th-gen iPad’s port is limited to USB 2.0 data speeds of 480Mb/s while the iPad Air is significantly faster at 10Gbps. 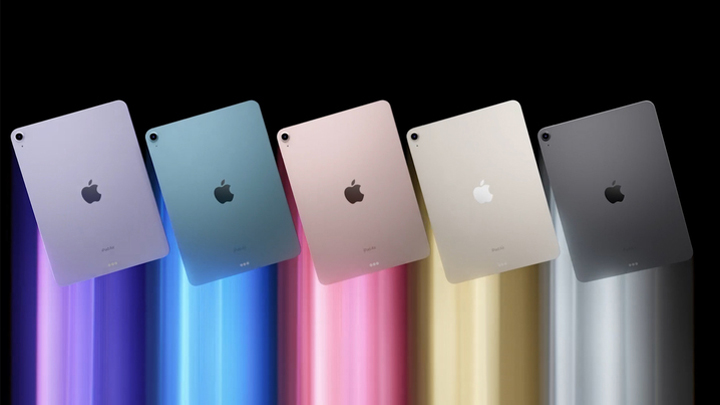 If you want to use an Apple Pencil all the time, the choice here is pretty clear. The iPad Air supports the 2nd-gen Pencil, which magnetically attaches to the side of the iPad to charge and is more comfortable to use.

The 10th-gen iPad uses the first-gen Pencil, which is smooth and round so it never stays put, has a small cap on the back to cover the Lightning plug (that people often lose), and requires an included Lightning-to-USB-C dongle and cable to charge. Despite identical specs, the second-gen Pencil is a much better experience overall.

10th-gen iPad vs. iPad Air: Which is the smarter purchase?

With a starting price of $449, the 10th-gen iPad might seem like a better buy for a casual user than the $599 iPad Air. It’s got the same major features, cameras, and more than enough power for casual everyday tasks. In fact, you could get the 256GB model for the same price as the 64GB iPad Air.

However, the iPad Air is often on sale for $520 or less, which puts it at less than $100 more than the 10th-gen iPad. For that price, it’s highly recommended. If you are a digital artist or content creator, you’ll probably appreciate those areas where the iPad Air has an edge. The second-gen Apple Pencil is a lot nicer to use, and the M1 processor really shows its benefits on strenuous applications like ProCreate, Affinity Designer, or LumaFusion. Content creators will probably appreciate the P3 color gamut for the display, too.

If you’re on a tight budget, the 10th-gen iPad is a fine choice, but no one will regret buying the iPad Air instead.

Read our separate guide for more help deciding which iPad to buy and be sure to check out our roundups of the best iPad deals and best iPad Air deals.