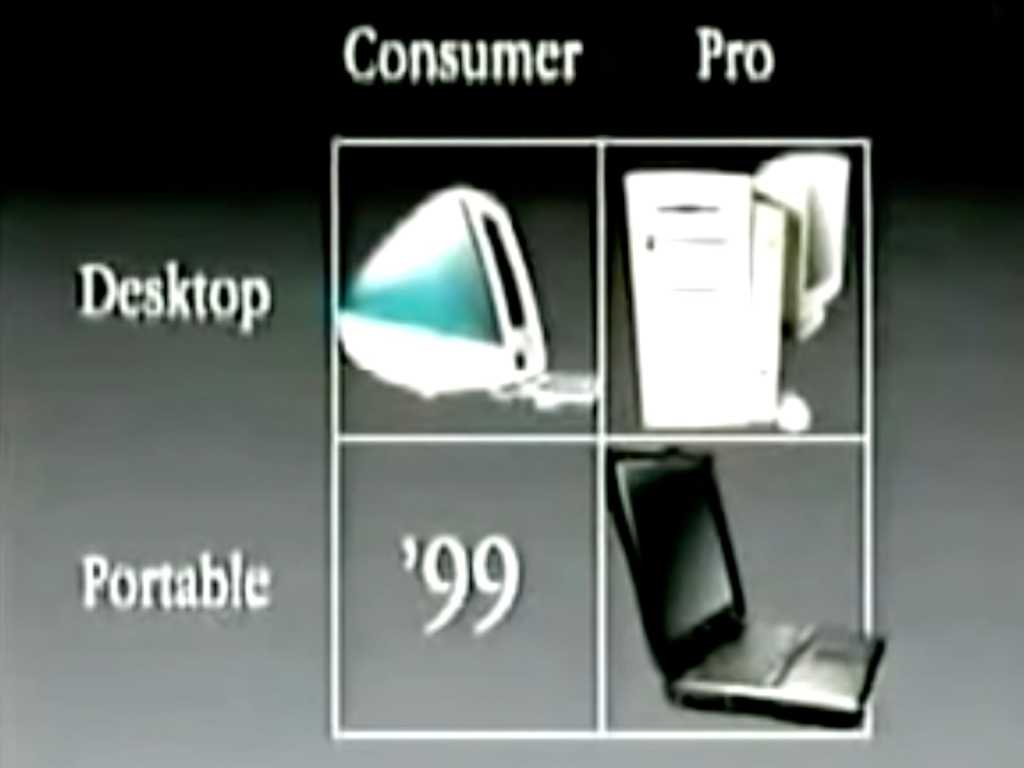 It’s time to talk about quadrants.

No, don’t get up. Those of us who’ve been Apple customers since before the iPhone and before even the iPod–back when dirt wasn’t even new, it was just a hypothetical substance that had only been theorized in cutting-edge research papers–Steve Jobs rationalized Apple’s product lineup by implementing a quadrant consisting of four squares, as quadrants are wont to have. The squares were defined by the attributes Desktop/Laptop and Consumer/Pro, making it easy for people to know just which devices were for them.

This was a reaction to Apple’s product lineup before his return which looked more like the periodic table as interpreted by MC Escher, featuring lackluster product names like Centris and Performa that told you little to nothing about who should consider buying them. “My politics are Centris, but I’m really looking for a machine with some Performa… nce. Eh, I think I’ll just get a Dell.”

Steve made it so that anyone could figure out which Mac to get without thinking too hard about it. When you’re getting close to going out of business, you don’t want to make it hard for people to buy your products.

Apple is clearly not about to go out of business. If anything, business is about to go out of Apple. (The Macalope doesn’t know what that means.) Options, of course, are good. So why not have more options? Because what isn’t good is confusion. And last week’s iPad announcements offered quite a bit of both. When taken each on their own, the 2022 iPads are all very nice devices. But if one of them mugs you in a dark alley, good luck picking it out of a lineup.

It used to be that you had your small iPad (mini), your older but cheaper iPad (the, uh, iPad), your light but pretty powerful iPad (Air) and your pro iPads (Pro). Now you have your small iPad (mini), your older but cheaper iPad (9th generation iPad), your newer and still a bit cheap iPad (10th generation iPad), your just barely lighter iPad (the iPad Air is 461 grams while the iPad is 477 grams) and your pros (Pro). The 9th generation iPad has an A13 chip, the 10th generation an A14 and the mini an A15. If that’s confusing, just remember the mnemonic Only Nancy Mumbles, for Old, New, mini. Now, the iPad Air has an M1 chip while the Pros both have M2s. Oh, also the Air is just five grams lighter than the 11-inch iPad Pro, practically indistinguishable but… Air. The Air also has a single camera on the back like the mini, the old iPad, and the new cheap iPad. The two Pros have hella cameras, bro.

Are you still with the Macalope?

If so, can you tell him where he is because he is lost. And he hasn’t even mentioned the keyboards.

It’s not just iPads that have gotten a bit confusing. Take Apple silicon. You have your M1 and your M2. That’s easy to understand. The M is for Mac (except when it’s in an iPad) and 2 comes after 1. Easy peasy. Pro is for professionals. Duh. Max is apparently for people who are slightly more professional? Perhaps it’s a way they dress, perhaps it’s the way they comport themselves at the office. We don’t know. It’s clearly not for “maximum” because Apple also has the Ultra, which is for people who are just “all that”.

At least that’s how the Apple Watch Ultra is positioned so the Macalope assumes it’s the same.

Let’s talk iPhones. Actually, let’s not. The Macalope’s head already hurts and you get the general idea.

Maybe we’re just in a transition phase. Maybe when Apple ditches the 9th-generation iPad and moves the 10th-generation down to that price point it’ll all start to make more sense. One line of iPads that all generally look the same but are differentiated by price and performance. Right now, though, it can be pretty challenging to tell someone what iPad or iPhone to buy.

The Centris-ification of Apple hurt the company when it was already down. Apple is clearly in a different position right now so it can afford to do what it wants. But a more rationalized product lineup would have made it easier for the Macalope to field questions this Thanksgiving.