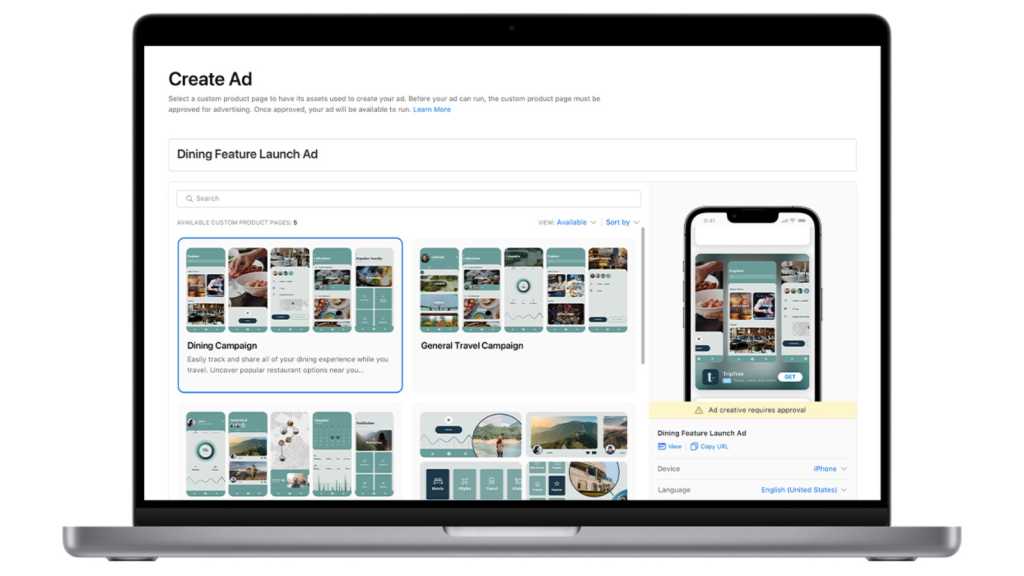 For a long time, Apple has placed itself in opposition to Google. Google is fundamentally an advertising company whose customers are ad buyers, while Apple’s customers are people who buy Apple devices and services. Despite seeming so similar in so many ways, they’re really quite different.

But lately, it seems that Apple is interested in being a bit more like Google. As Bloomberg reported in August, Apple VP of Advertising Todd Teresi has a dream of taking the company’s current $4 billion in annual ad revenue and more than doubling it, into the double digits of billions.

I’m not one of those people who think that advertising is fundamentally evil. (I have, after all, spent my career working for media properties–including this one–that are funded by advertising.) But I do wonder if Apple’s quest to chase ad revenue reflects a culture that has lost the plot about what makes Apple great.

Reasonable people can differ, but I don’t think ads are bad. Yes, they can be terrible, but good ads–ones that are for stuff you’re interested in, properly labeled as ads, and not getting in your way–can be informational and fun, and useful.

The ads Apple added to the App Store last month were not good ads. In a move so universally reviled that Apple quickly backed away and paused what it was doing, the company began dumping irrelevant ads for some fairly unsavory apps across all sorts of App Store app pages. The developers of those apps–for whom the App Store is the only game in town–were furious.

Then came the report that Apple is gearing up to sell ads into its broadcasts of Major League Soccer next year, along with a report that Apple’s investigating putting ads on Apple TV+. I’m a lot less upset about these reports, in part because sports advertising is already pretty commonplace and because almost every major streaming platform now offers a cheaper tier with ads and a more expensive tier without.

Then there are more troubling reports, like that one from Bloomberg that suggests Apple might stick ads in its Maps, Podcasts, and Books apps–joining the ads already in News and Stocks. I have a hard time imagining that these would be the good kind of ads.

So if there are good ads and bad ads, who decides which is which? That, to me, is the big question when it comes to today’s Apple. Is it Todd Teresi?

Todd is not the devil

A lot of close Apple watchers have spent the months since that initial Bloomberg report demonizing Todd Teresi. They’re misguided. Todd Teresi is not the problem here. He’s a sales guy. “Advertising” is in his job title. He is undoubtedly judged based on how much advertising revenue his group generates for Apple, and so he’s going to work as hard as he can to find spaces on Apple’s products into which he can shove ads and make more money.

But who else is part of the equation? Who decides when Teresi and his team have gone too far? Who argues for the user experience, putting the needs of Apple’s brand identity and its customer-satisfaction scores up against a deal that will make using Apple Maps or Apple Podcasts a little worse for a small boost in cash flow?

This is where I’m concerned. For years, it was my job to be the person who argued for the user experience over incremental ad revenue. (Let me tell you, there is no place more lonely than being the person arguing that a struggling publishing company should turn down money for fear of ruining an unmeasurable concept like “user experience” or “product quality.”)

I’ve seen it firsthand: Given the opportunity, people like Todd Teresi will sell every last inch they are given the opportunity to sell. It’s their job. You might as well tell a star to stop shining. The important thing is to have someone who can say no.

In observing Apple’s moves over the last few months, combined with the Bloomberg report, I’m starting to wonder if that person exists at Apple. No, let me rephrase that: I’m sure that person exists. I’m sure there are still people at Apple who champion the user experience and realize that it’s vitally important to Apple’s brand perception and customer satisfaction and who are aware that once those things are lost, it is very hard to ever regain them.

I’m just not sure that whoever is in a position of authority is listening. And that’s deeply concerning because if Tim Cook loves customer satisfaction so much that he quotes “customer sat” research figures at the drop of a hat, his company should have a culture that guards against ad salespeople trading customer sat for relatively little.

What does Apple stand for?

To bring this back around, Apple isn’t Google. And yet it seems to be striving to build an advertising business in an approach so haphazard that it risks ruining products and alienating both its users and its developers. Not all advertising is bad, but ad sales folks like Teresi and his team are not in the business of determining that. Someone else has to keep the big picture in mind and learn how to say no. (Wasn’t it Steve Jobs who said, “You’ve got to say ‘no, no, no'”?)

Someone at Apple needs some perspective–or needs to listen to and empower the people who already have it. Apple brought in almost $400 billion in revenue in its fiscal 2022. The $4 billion Bloomberg quotes as Apple’s current business is about one percent of that. Is it worth it? (I’d argue that this same dynamic is at work in Apple’s own increasingly intrusive marketing inside its apps.)

Think of it this way: If Teresi’s reported goal of breaking $10 billion in ad revenue succeeds, he’ll have created a business that’s roughly a third of the size of the iPad business, currently the smallest of Apple’s five revenue categories. I’m not saying $10 billion is chump change. It’s objectively a huge amount of money. I’m saying that if you weigh it against the other $400-plus billion of Apple’s next fiscal year, you will find it wanting.

Some ads are good, and some are bad. And to protect Apple’s brand and products from bad ads, someone in charge needs to get perspective and be able to tell the difference. Apple’s public image and the image of Apple’s products are on the line. It would be a shame for the company to wreck itself for such a minor revenue boost.