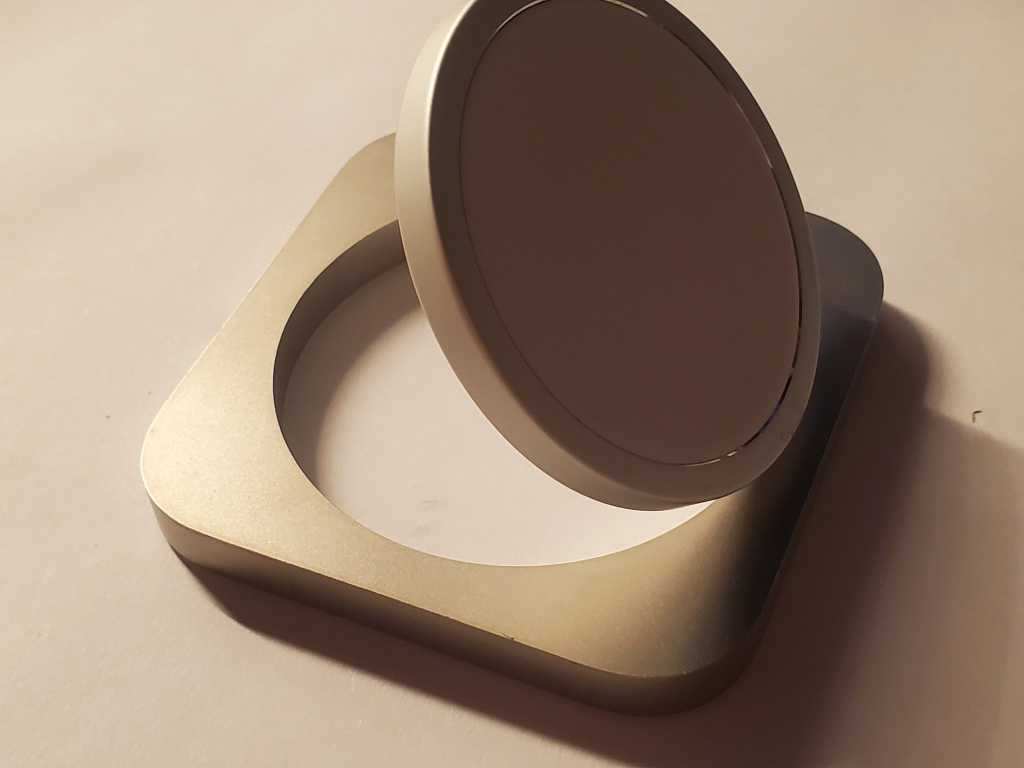 Images have appeared online of what collectors are claiming is an unreleased Apple product called the Apple Magic Charger. Those with access to the samples are doing their best to get the devices working, but questions remain over why the project was cancelled before launch.

Somewhat reminiscent of the old (and now discontinued) Magnetic Charging Dock or the MagSafe Duo Charger, the Magic Charger features a circular magnetic charging surface that can either lie flat or pop up, making the iPhone’s screen visible while it charges. As AppleInsider points out, however, the design means the iPhone could only be attached in landscape orientation, whereas many dock charging setups allow the iPhone to sit in portrait mode, arguably a more natural position for displaying notifications.

Whether this limitation is why Apple got cold feet about the project remains unclear. All we know is that the device was developed to the point where working prototypes were created and distributed for what’s known as the DVT, or Design Validation Test, but between the DVT and the public announcement someone decided to pull the plug. The Apple Magic Charger was never released, and until now the general public had no idea it even existed.

It’s possible that testing uncovered a serious technical flaw–something similar to the issues believed to have stopped the AirPower project in its tracks. Apple was hurt by its experience with AirPower, which was publicly announced long before launch and thus represented a visible failure; this may be why it was more cautious with development of the Magic Charger. (Then again, it might be better to think of AirPower as the outlier, since most Apple products remain secret until they are launched.)

Assuming that the device was functional (which is what we’d ordinarily expect; after all, this isn’t anywhere near as ambitious a product as AirPower, essentially representing the standard MagSafe charger within a simple popup frame), it’s hard to see why it wouldn’t proceed to launch. It wouldn’t be expensive to manufacture, looks attractive enough, and offers a small but worthwhile upgrade on the default charging puck. Maybe Apple simply isn’t very interested in expanding its range of MagSafe accessories; we certainly feel the technology is being underused.

Whatever the reason for its premature demise, the Magic Charger is making waves online, where collectors of defunct and unreleased Apple products are fascinated by the device. The well-known Apple leaker DuanRui has got hold of one sample. Another lucky owner is a Twitter user called TheBlueMister, who has gone so far as to perform a teardown; obtained with its power cable cut, their charger remains non-functional at time of writing. We wish TheBlueMister luck and hope to see the Magic Charger in action in the future–although we’re happy that it’s not us doing the testing.