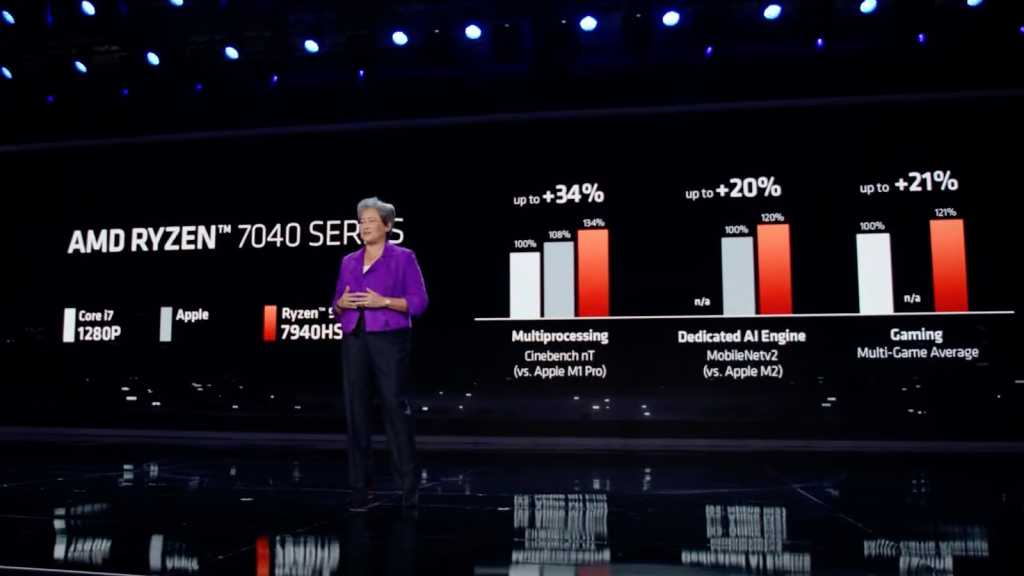 Apple might not be a part of CES 2023, but that doesn’t mean it doesn’t loom large over the whole show. Case in point: In its announcement of new PC processors, chipmaker AMD took a few swipes at Apple’s MacBook chips.

To tout the performance of its new products, AMD makes a couple of comparisons to Apple’s chips. In benchmarks, AMD says its new Ryzen 7040HS Series Mobile processors deliver “up to 34% faster multithreaded performance” in apps including DaVinci Resolve BlackMagic, V-Ray, Blender, Cinebench R23 nT, and Handbrake 1:5:1. That’s a very specific but nonetheless impressive claim, though Apple will likely retake that crown when its M2 Pro chip arrives this year. Also, while AMD is a graphics-oriented company, it makes no claims as to GPU performance against Apple’s impressive M1 Max processor, which has a 32-core GPU.

AMD also announced “the first dedicated artificial intelligence hardware in an x86 processor” which it calls Ryzen AI. AMD says that chips with Ryzen AI are up to 20 percent faster and 50 percent more energy efficient than Apple’s M2 System on a Chip, which has a 16-core Neural Engine dedicated to machine learning. Machine learning is an application of front-facing AI that works behind the scenes to let devices learn to be more efficient without user input.

Apple introduced the Neural Engine in 2017 with the A11 Bionic processor in the iPhone 8, 8 Plus, and iPhone X, and includes it in the M1 and M2 chips. Apple says its Core ML technology “is designed to seamlessly take advantage of powerful hardware technology including CPU, GPU, and Neural Engine, in the most efficient way in order to maximize performance while minimizing memory and power consumption,” but makes no specific claims as to the performance improvements to chips without it.

Apple has used AMD graphics processors and cards in the past, but it has never used AMD CPUs in any of its Mac releases. However, since Apple’s M-series chips have made such a big impact in such a short time, the comparison is unavoidable. And competition makes for better products, so we’ll be watching to see what Apple does with its own chips in 2023.