Apple expanded its laptop offerings beyond the venerable PowerBook line Tuesday, with the release of the MacBook Pro portable computer. Announced by Steve Jobs during his Macworld Expo keynote, the MacBook Pro is the first laptop from Apple to use an Intel-built chip, the Intel Core Duo processor.

Apple claims the MacBook Pro delivers up to four times the performance of a PowerBook G4, with Apple CEO Steve Jobs hailing it as the fastest notebook ever. The 5.6-pound system is housed in a one-inch thick aluminum enclosure and features a 15.4-inch LCD screen that’s 67 percent brighter than the PowerBook’s screen; Apple says the MacBook Pro’s display is as bright as the company’s desktop Cinema Displays.

The company will offer two versions of the MacBook Pro—one with a 1.67GHz Intel Core Duo processor, and the with a 1.83GHz Intel Core Duo processor. A new iMac, also announced at Macworld Expo, features Intel processors as well. The system architecture has been altered for faster performance—the laptop features a 667MHz frontside bus, that is four times as fast as the PowerBook G4. The new laptop also ships with 667MHz DDR2 SDRAM memory, twice as fast as the old PowerBook. The 1.67GHz model ships with 512MB of RAM while the 1.8GHz model has 1GB installed; both systems can hold up to 2GB of RAM. 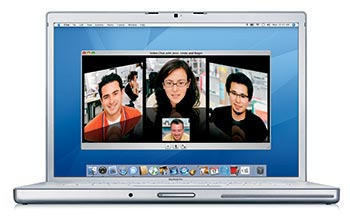 While Apple is taking orders now, the MacBook Pro won’t begin shipping until February. The 1.67GHz, 15-inch MacBook Pro sells for $1,999, while the 1.83GHz is priced at $2,499. Build-to-order options will be available as well.

Though Apple plans to have Intel processors in all of its hardware by the end of 2006, the PowerBook G4 remains available in 12-inch, 15-inch, and 17-inch configurations. Those models remain available for purchase at Apple’s online store.

Updated at 3:14 ET to include information on PowerBook G4 availability.