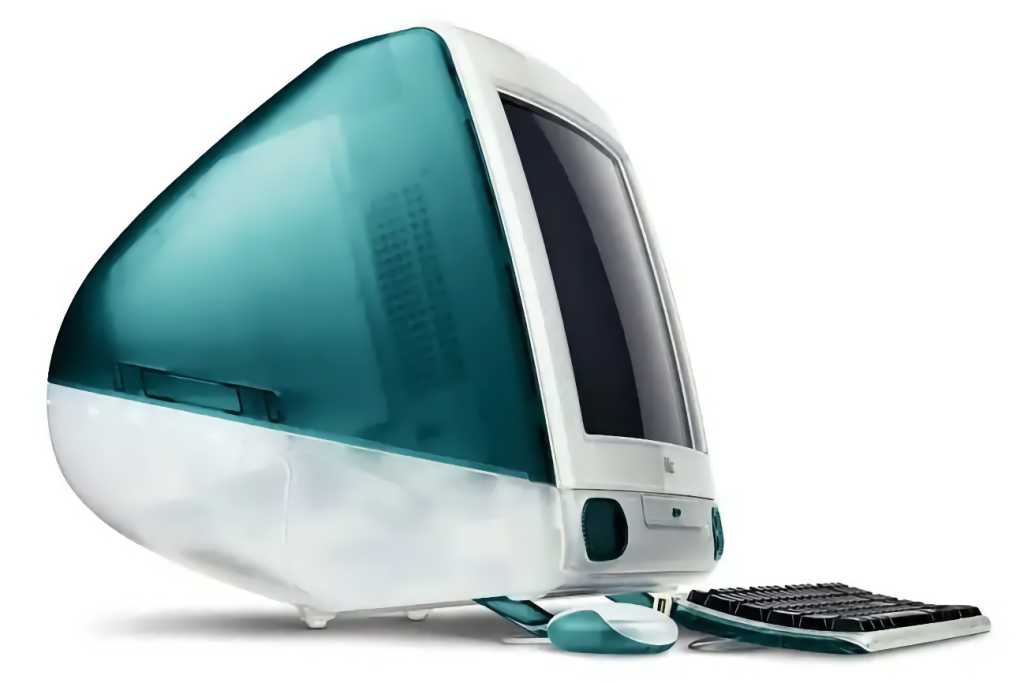 Retro is in, and Steve Jobs knows it. He’s reached into Apple’s past in hopes of blazing a trail back into the hearts of consumers, with a daring new entry-level Macintosh: the iMac. Two years ago, Apple quietly exited the low-cost computing market, citing an inability to compete with manufacturers of Windows-based PCs on price and time-to-market issues. Since that time, the company downsized and, according to interim CEO Jobs, became much more efficient and able to deliver new products faster. As a result, Jobs says, Apple is ready to reenter the consumer market with a dramatic new Macintosh that relies as much on nostalgia as it does on bold technology and design. At $1,299, the iMac offers leading-edge capabilities, a breathtaking design, and a bargain price.

For years, Apple relied on pedestrian designs for its desktop computers, leaving visual innovation to PowerBook designers. The iMac is different: it demands to be noticed, sporting a fresh, ultramodern design that is at the same time very familiar.

It’s hard not to recognize the iMac’s lineage: the all-in-one case, the tiny footprint, even the integrated handle—all suggest the original Macintosh. But this is where the similarities end. Using translucent plastics of “ice” and “Bondi blue” (in homage to the Australian beach), Apple’s industrial-design group created a computer without a single straight line—even the keyboard components are curved. The case allows through just enough light to suggest the outlines of the iMac’s internal works without revealing too much.

Every piece of this system—from cables to key caps—uses translucence, curves, and light to great effect. The round mouse reveals a tracking ball that’s half white and half blue-green—watching the mouse while it’s in motion can be mesmerizing. Adding to the space-age effect, Apple will use holographic stickers for port identifiers, FCC tags, and other labels. A translucent white flip-down foot props up the keyboard, coordinating nicely with the iMac’s aquamarine appendage.

Slightly Ahead of Its Time

Breakthrough design doesn’t stop on the iMac’s surface: a cutting-edge logic board hides behind the futuristic plastics. A 233MHz PowerPC G3 processor complete with a 512K backside cache—a combination that should yield respectable performance—lies at the heart of the newly designed board. Like the new G3 PowerBooks), the iMac uses SODIMM RAM, a common memory standard on Wintel PCs. This design choice should make it easy and inexpensive to expand the iMac beyond its standard 32MB of RAM, up to its 128MB maximum. A daughtercard houses the CPU, two RAM slots, and a new OpenFirmware ROM.

The CPU daughtercard connects to the main logic board via a speedy, 66MHz PCI system bus. The iMac comes with the ATI Rage IIc 2-D/3-D accelerated-graphics chip set and 2MB of SGRAM for video. Connectivity features include 10/100BaseT Ethernet via an autonegotiating RJ-45 jack, a 4-Mbps IrDA infrared port, a 33.6-Kbps modem, and two 12-Mbps Universal Serial Bus (USB) connections.

Rounding out the package, the iMac comes with audio-in/out ports on the side of the unit, two headphone jacks on the front of the case, and a low-noise digital-audio chip that supports simulated surround sound (SRS) on the iMac’s two integrated speakers.

A rear door offers access to a slide-out chassis that houses the logic board and media bays, making it easy to upgrade both RAM and storage devices; a 4GB EIDE hard drive and a 24()() ATAPI CD-ROM drive are standard equipment.

Considering all these amenities, the most shocking part of the iMac isn’t what it offers, but what it lacks. The iMac has no floppy drive, which might be forgivable if there were a Zip drive or other removable-media option, but there isn’t.

And most dramatically, this new consumer offering has no SCSI port, no standard serial ports, and no ADB ports. Apple has opted to replace these familiar connections with USB, a high-speed serial architecture that has suffered from slow adoption on the Wintel platform despite its technical advantages (see the sidebar “USB: Ready for Prime Time?”). Currently, no USB devices exist for the Mac.

The Once and Future Macintosh

Once Apple gets peripheral issues ironed out—and Apple assures us that it will in time for an August launch—it seems the iMac is destined to be a hit among the installed base of Mac users, hungry for a machine they can be excited about. The real question is whether Apple will be able to convince current non-Mac users—or even non-computer users—to buy an iMac.

Here, like so many vendors, Apple is relying on the popularity of the Internet. It’s hoping that the Mac OS’s legendary ease of use, combined with the iMac’s multitude of built-in networking options (100BaseT is a natural for DSL and cable-modem connections, for example), will help bring more users into the Macintosh fold. Apple has set its sights high for the iMac; although they declined to state how many units will be manufactured, marketing managers told us that the iMac launch would be “probably the biggest in Apple history.”

Will this latest chapter in the Macintosh saga be Apple’s success story at last? Only time will tell.

Perhaps the biggest variable in the iMac’s equation is Apple’s renunciation of its old connectivity standbys—SCSI, ADB, and traditional Macintosh serial ports—in favor of the Universal Serial Bus (USB).

The bad news is that no current Mac peripherals support USB. Unless printer, scanner, or other external-device manufacturers take the time to write special drivers and provide adapter cables, chances are that iMac owners won’t be able to use any devices they already own—or those released before the iMac’s debut. It’s physically possible to connect non-USB peripherals to the iMac with an adapter, but peripherals vendors must write USB drivers before their devices can communicate with the iMac.

Apple claims that hardware vendors will offer a wide variety of USB devices for the iMac, although the company was unwilling to reveal names at press time. Surprisingly, Apple itself has no plans to offer critical devices such as floppy and Zip drives and instead will rely on third parties.

Although USB offers an inexpensive and speedy alternative to traditional serial and ADB, it’s a poor substitute for SCSI because the speeds of USB devices are interdependent: the more active devices on the bus, the slower each USB peripheral is likely to perform—a major issue for storage products.

But the good news is that a machine equipped with USB can support up to 127 logical devices, including disk drives, keyboards, mice, modems, scanners, cameras, printers, and even monitors. Still, the iMac’s two ports might seem rather skimpy, considering that every peripheral device has to have its own connection. However, because USB uses a hub topology (like Ethernet), adding more ports is simply a matter of connecting a powered USB hub, a feature built into many USB devices. The keyboard that comes with the iMac acts as such a hub: both the mouse and another USB device can be plugged into it.