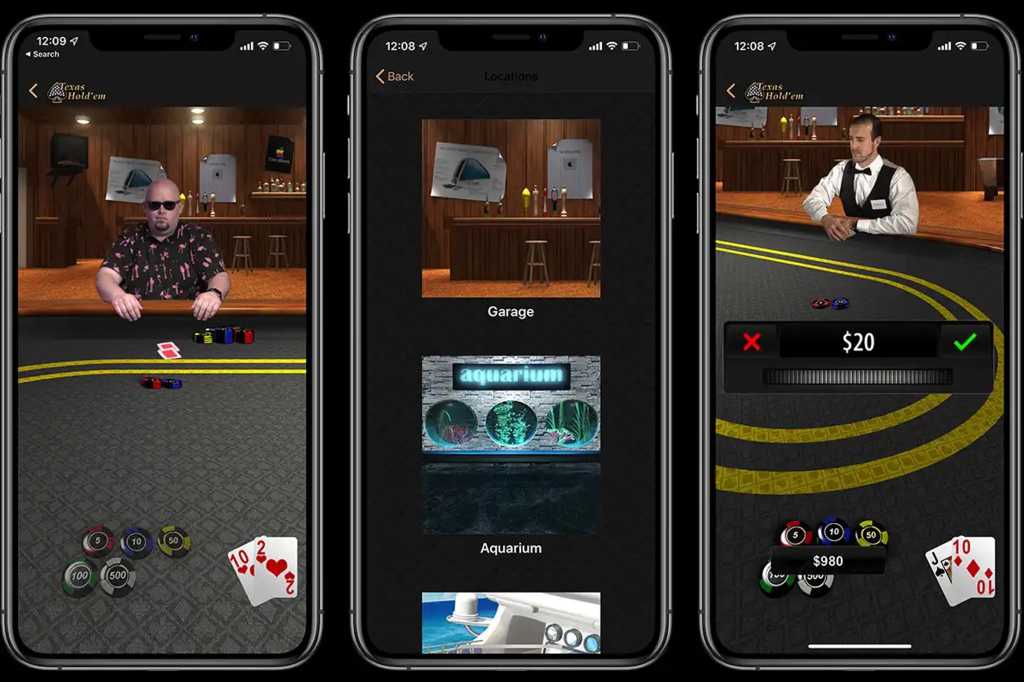 I must admit that when Apple released its Texas Hold’em poker game for the iPod back in 2006, I spent many hours, iPod in hand, honing my poker skills (if nothing else, I did get to play against digital versions of some Apple executives ).

As good as that game was at the time, Texas Hold’em for iPhone blows it away. When you play in first-person view (holding the iPhone upright in portrait orientation) the graphics are top-notch, featuring 10 locations with progressively higher buy-ins (in order: Garage, Aquarium, Cruise Ship, Paris, Istanbul, Ice Bar, Roppongi, Vegas, Aruba, and Dubai). The backgrounds shift as the bet moves around the table, and you’ll find nice touches‚ such as posters of the original iMac or the Think Different ad campaign in the Garage location, for example.

The characters you play against look great: Their movements are much smoother, more realistic, and more complex than in the original iPod version. When these animated characters bet, the amount of chips they push in is actually relative to the size of the bet (the whole stack makes the journey when characters go all-in). When you win a hand, the dealer pushes the pot in your direction, then gives you a clap and a thumbs-up. (All these animations explain the app’s huge 128MB download size.)

Background noises include cheers, a double-tab noise when a player checks, and other immersive sounds. There’s also background jazz (piano, drums, bass) playing. The music can get annoying after a while, but you can turn it down or off in the Settings section of the game, as you can with the other sound effects.

When it’s time to determine the amount you’re going to toss into the pot, the game brings up an on-screen dial to choose. (The iPod version, of course, used the Click Wheel). When you dial into an amount, the interface also shows how much money you’ll have left after placing a bet of that particular amount. When it’s your bet, you can also tap on the dealer to see the blind amounts, the next blinds, and the number of hands until the blinds increase—tapping on the pot shows the amount in it.

If you decide that the person sitting across from you isn’t bluffing her way to a pot, and your pocket deuces aren’t going to be enough, it may be time to listen to those wise words from Kenny Rogers and fold ‘em. Even this is cool—you just drag your cards into the middle of the table and the game animates the cards flipping over.

The downside to all these great graphics is that the game moves pretty slowly to allow you to soak in the ambiance. You can speed things up by tapping on the screen often during betting rounds, but then you lose all the scenery‚ not to mention the player’s tells. Turning the iPhone sideways in landscape orientation switches the game into top-down view. In this view, things move a lot faster, and you can see how much money a player has. Tap on a player to find out more about them: where they’re from, how old they are, their stats, and a quote (Tiffany: “Never give a sucker an even break” or Chris: “Just one more hand and I can get it all back!”)

In top-down view, you can choose from almost 150 icons to represent you at the table, including players for the original iPod version, five different dogs playing poker, and several aliens.

Unlike in first-person view, where the communal cards are dealt face-up, with top-down view, the flop (the first three cards) is dealt face down and then flipped (like in real poker), as are the turn and the river.

The other cool feature is a multiplayer option that lets you play against up to eight other actual, live iPhone or iPod touch users over a Wi-Fi network. I tried it out with a co-worker in the office, and we experienced several dropped connections with our (admittedly unreliable) wireless network. When I tried it at home with two iPhones and my AirPort Extreme base station-powered Wi-Fi network, I had no problems.

Of course, if you’re close enough to play on the same network, maybe it’s a better idea to break out the cards and stare down your friends in real life.

Texas Hold’em is compatible with any iPhone or iPod touch running the iPhone 2.0 software.