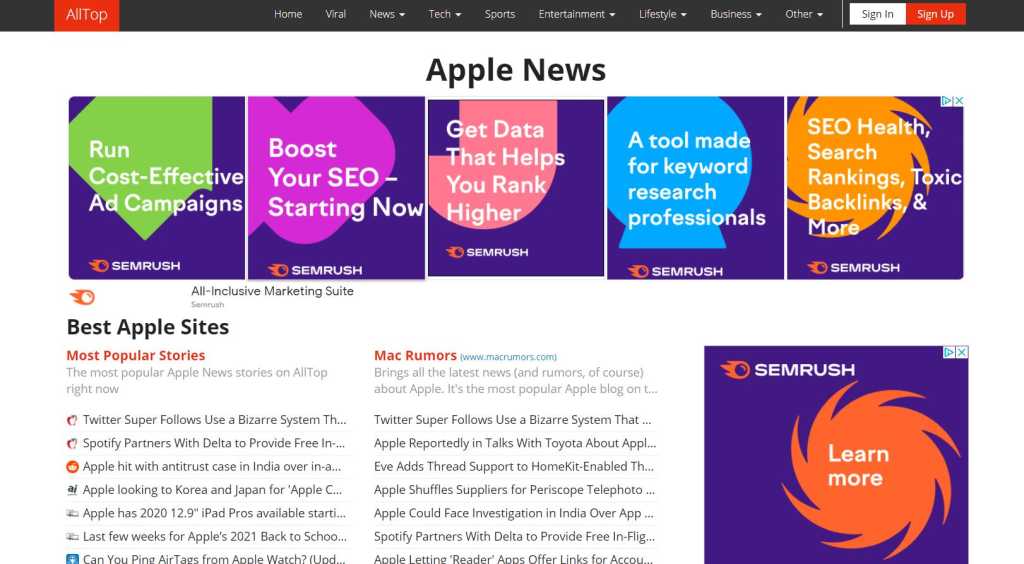 So for a whole bunch of reasons far too random to detail here, I ended up sitting in a restaurant attached to a Bay Area ice rink last week, watching skaters slip and fall while chatting with longtime Apple evangelist and Mac columnist, and current venture capitalist, Guy Kawasaki.

If you’ve never heard of Kawasaki, I’d like to explain, but as Inigo Montoya might say, there is too much. Let me sum up. He pioneered the concept of product evangelism, whipping up enthusiasm among users and developers for Apple’s products. Later he wrote columns for first MacUser and then Macworld for years (more on that in a bit). And now he’s got investments in a bunch of interesting companies.

One of the big topics of conversation during my sit-down with Guy—which happened in the late afternoon, so I can’t say I lunched or dined with him, though (full disclosure) he did buy me a Coke—was his web site venture, Alltop. Alltop basically aggregates the latest and greatest news on various topics (hundreds at last count) on a single page. So, for example, if you happened to be interested in the Mac, mac.alltop.com will provide you with a slew of links. iPhone fans similarly can see the latest on iphone.alltop.com. (Yes, Macworld and its sites appear on both of those pages, which are handpicked by the Alltop staff.) Pick another topic, be it beer or gardening, and you’ll see links for those topics, too.

I asked Guy the typical question a tech-savvy person would have about Alltop, which is: in a world full of RSS feeds, why would anyone use it? But of course, not everyone uses RSS. If you’re tech savvy enough to set up an RSS reader and fill it with your favorite sites, congratulations. But if you’re not—or, more to the point, if your mom or dad isn’t—the Alltop collections are pretty easy to bookmark and browse. (And if you’re someone like me, who is clever enough to use an RSS reader but who gets so distracted that you often find thousands of unread items, you might appreciate Alltop for its strict limits: only five links per site, period.)

There’s another Mac angle at Alltop, which is that the company’s prime mover is Will Mayall, who some Mac oldtimers will remember as one of the authors of Claris Emailer and the LetterRip mailing-list software. Alltop’s a tiny company with a lot of smart automation behind the scenes, pulling information from RSS feeds and republishing them as pages of links. The company generates revenue by placing ads toward the top of its pages.

It was interesting, but also pretty simple. “Let it be open,” he said. His point is that Apple doesn’t need to exert a huge amount of control over the iPhone app market. The best way to excite developers and users is to have a wide-open market for software, he said.

It’s funny that during this App Store furor, people’s minds have turned to Guy Kawasaki, but it’s happened all over the place. iPhone developer Fraser Spiers asked for someone like him, saying that Apple should “loudly and conspicuously hire an App Store Evangelist. Preferably someone with an already high profile who does not already work for Apple. In fact, it might even be best if this person was not paid by Apple but an independent developer to whom Apple would give deep access to work with the App Store team.” And Ars Technica quoted a Chicago-based developer as saying, “We need Guy Kawasaki back.”

I don’t think Guy’s going to be going back to Apple anytime soon. He seems happy investing in smaller tech companies, traveling, and speaking. (And playing ice hockey.) But I can’t deny that Apple hiring someone like Guy to act as an out-there evangelist for iPhone development would be excellent.

Before I said goodbye to Guy and hit the road, we reminisced about his days as a columnist for monthly Mac magazines. He fondly recalled an old article where he compared using a state-of-the-art Mac to flying in an F-15 jet. I expressed to him how I’d love to get the text of all of Macworld’s (and MacUser’s and MacWEEK’s) issues from the dawn of time on the Internet in searchable form.

Well, that day isn’t here yet, but I’m happy to present two of Guy’s old columns: Here’s “The F-15 vs. the Quadra 800” from the July 1993 issue, and here’s an interesting and prescient article, “The Goal of a New Machine,” wherein Guy suggests (in the summer of 1993, as the Newton was being released!) that what he really wants is a combination of cell phone and computer. It’s an even better read 15 years later, when you keep the iPhone in mind.