Logitech’s $80 Wireless Solar Keyboard K760 for Mac, iPad, iPhone is one of my favorite Mac keyboards of the past few years, thanks to—as I put it in my review—an appealing design, good keys and key layout, a nice batch of special-function keys, a reasonable price, and multi-device Bluetooth support. The company has followed up with the $100 Bluetooth Easy-Switch Keyboard K811, a keyboard that’s similar to the K760 in many ways, yet different enough to make it even more tempting to some people. (The Easy-Switch is specifically designed for Apple devices; the Bluetooth Illuminated Keyboard K810 is a nearly identical keyboard designed for use with Windows PCs and Android devices.)

The Easy-Switch’s smaller front-to-back dimension compared to the K760 is largely attributable to the fact that the Easy-Switch’s rechargeable battery isn’t solar-powered, so it doesn’t need the K760’s large swath of solar cells. Instead, you recharge the Easy-Switch by using the included cable to connect it to one of your computer’s USB ports. According to Logitech, a 3-hour charge lasts for between 10 days (with key backlighting on full) and a year (with backlighting off), depending on how much you type each day. Over a month or so of using the Easy-Switch with the backlighting at the second-brightest setting, I needed to recharge it only once.

Wait, backlighting? Yes, the Easy-Switch, unlike the K760 and most other wireless keyboards on the market, features laser-etched, backlit keys to make it easier to see the keys in dimly lit working environments: The keys’ white characters are lit from behind. Unlike Apple’s backlit laptop keyboards, this model shows a bit of light bleed around the edges of the keys, but overall the Easy-Switch’s backlighting looks great. The keyboard automatically adjusts the brightness of the backlighting (four levels of brightness are available) based on the ambient light level, or you can press the F8 or F9 key to manually lower or raise, respectively, the brightness level. You can also manually disable backlighting to extend battery life.

Speaking of backlighting and battery life, my favorite feature of these backlit keys—beside the fact that they’re backlit, of course—is that the Easy-Switch automatically disables backlighting after a period of inactivity, and restores it using a motion sensor. Whenever the keyboard detects your hands over the keys, it immediately turns the backlighting back on.

There’s also a physical power-toggle switch—are you listening, Apple?—on the rear edge of the Easy-Switch to turn the keyboard off completely. Alas, it’s difficult to figure out exactly what the current battery level is, as the Easy-Switch offers only a single battery-indicator light. This light glows red when the battery is getting low or green when the keyboard is actively charging; if you turn off the keyboard and then turn it back on, the light flashes green to indicate an “adequate” charge, or red if the keyboard needs charging. Other than that, there’s no way to determine the current charge level of the keyboard’s battery without installing Logitech’s optional software, which can present an onscreen notification when the keyboard’s battery gets low (but not a specific battery level when the battery isn’t low).

Like the K760, the Easy-Switch pairs with multiple devices using Bluetooth and makes it simple to switch between them (hence the keyboard’s name). Specifically, you can pair simultaneously with up to three devices: any combination of Macs, iPhones, iPads, iPod touch models, or Apple TVs. The keyboard’s F1, F2, and F3 keys are each labeled with the Bluetooth symbol, and each corresponds to one of your paired devices—pressing one of these three keys immediately connects the Easy-Switch to the device assigned to that key. A blue LED above the key flashes as the keyboard connects, and then glows solid for a couple seconds to indicate that an active connection has been established.

[ Further reading: The best surge protectors for your costly electronics ]

I paired the keyboard with my iPad (F1), my iMac (F2), and the Apple TV (F3) in my office. In my testing, switching between devices worked quickly and flawlessly, taking only a few seconds for each switch. As with the K760, I appreciated being able to use the same keyboard for all those devices, quickly switching between them without having to lift my fingers from the keys. And the Easy-Switch is so compact and light that I could easily toss it in my bag for on-the-go iPad typing—which is why I recommended the Easy-Switch in my recent iPad keyboard buying guide. (Unlike with Apple’s keyboard, you don’t have to worry about the Easy-Switch accidentally turning on in your bag, thanks to the physical power switch.)

The only hitch here is remembering which F-key corresponds to which device. To keep them straight, I created little iPad, iMac, and ATV labels with a label-maker and stuck them just above the F-keys.

Like the corresponding keys on most Mac and iPad keyboards these days, the keys in the Easy-Switch’s top row serve as traditional F-keys when you hold down the fn key (located, as on Apple’s keyboards, in the lower-left corner), but they perform special actions when pressed on their own. (You can reverse this behavior in OS X’s Keyboard preferences pane or with the aforementioned Logitech software.) But because three of those F-keys are used for switching between devices, and because the keyboard works with both Macs and iOS devices, the arrangement of these special functions is a bit unusual compared to the arrangement on Apple’s keyboards, and the function of each F-key may change depending on the device. Here’s are the actions that the various F-keys control:

If you’ve used the K760, you’ll notice that the Easy-Switch differs a bit in its handling of the above functions. Specifically, you can’t control your iOS device’s screen brightness using the Easy-Switch; and to accommodate the backlight-level keys, the Easy-Switch omits skip-back and skip-forward keys for media-player control. Also, depending on your Mac, you may need to change some of your F-key assignments in the Keyboard and Mission Control or Exposé panes of System Preferences to get the expected results. 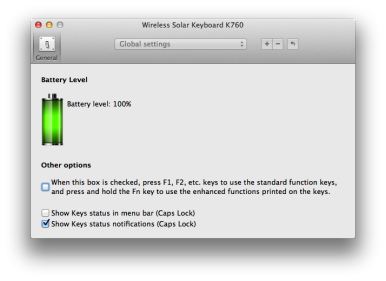 Regrettably, as with the K760 and the K750 before it, you can’t use Logitech’s Control Center software to customize the behavior of the F-keys. When using the Easy-Switch instead of my beloved—and long-discontinued—Logitech diNovo Keyboard Mac Edition, what I missed most wasn’t the dedicated numeric keypad, but the extensive F-key shortcuts I had assigned for launching apps, scripts, and the like. If you’d rather use the F-keys for these types of actions, you’ll want to grab Keyboard Maestro.

The Easy-Switch continues Logitech’s recent tradition of producing Mac keyboards with outstanding keys. These aren’t the best-in-class keys we loved on the older diNovo line, but the company’s new Incurve keys use a similar PerfectStroke technology underneath to give you very good key feel with short travel (the distance the key needs to be pressed down to register) and solid tactile feedback.

The Incurve name refers to the noticeably concave surface of each key: Instead of a flat top (possibly with a small dimple or depression in the middle), each key’s entire surface is concave, making it easier to locate keys by feel and to press the center of each key when typing. The surface of these keys is a bit too slick for my tastes—sometimes my fingers felt as though they were sliding around on the keys a little—but the concave shape means that a finger never actually slips off a key. And the overall feel of the keys is very good: I like the Easy-Switch’s keys a little more than the keys on the K760, which were slightly loose and “jiggly.” Overall, the Easy-Switch’s keys rank among the best Chiclet-style keys I’ve used, and they’re considerably better than those on Apple’s current keyboards.

The Easy-Switch features a full complement of standard keys, with everything in its proper location. There’s even an LED Caps Lock indicator on the Caps Lock key. (If you’ve installed Logitech’s Preference Manager software for the Easy-Switch, you can opt to also see an on-screen notification whenever you toggle Caps Lock.) Of course, as a compact keyboard, it lacks a dedicated numeric keypad, as well as Home, End, Forward Delete, Page Up, and Page Down keys, though you can accomplish those five actions by pressing the fn key in combination with Left Arrow, Right Arrow, Delete, Up Arrow, or Down Arrow, respectively. Similarly, fn-Escape emulates the Sleep command.

One drawback that’s becoming increasingly common on keyboards is that the F-key row is a single, uninterrupted line of keys flush with the top row of the main keyboard area. This makes touch-typing more difficult than it is with the traditional layout, where the F-keys are arranged groups of four, and the entire row is separated from the main keyboard area by a wider space. At least with the Easy-Switch, the F-keys are rounded, so a touch-typist can more easily differentiate them from the number keys.

Every time I tried to write the conclusion to this review, it ended up being nearly identical to the one for Logitech’s K760—just updated for the Easy-Switch’s unique features. And that’s because, solar charging versus backlit keys aside, the two keyboards are very similar. So without any pretense of originality, here’s that updated conclusion: The Bluetooth Easy-Switch Keyboard is one of the best Mac keyboards on the market thanks to an appealing design, good keys and key layout, and a nice batch of special-function keys—in this case, for both OS X and iOS. The Easy-Switch lacks the luxuries of an extended desktop keyboard, such as a numeric keypad, but it makes up for those omissions by providing multi-device Bluetooth support and a design that makes it small enough to toss into your bag. These qualities make it versatile enough to be the primary keyboard for your desktop Mac, your MacBook, and your iPad or iPhone—without sacrificing full-size keys or a standard key layout. Along with its sibling, the K760, it’s the most versatile keyboard we’ve tested.

Wondering whether to choose the K760 or the Easy-Switch? If you’ll be using the keyboard mostly in a well-lit home or office, and you don’t want to have to worry about charging batteries, the K760’s ambient-light charging is a compelling feature. But if you plan on packing your keyboard for on-the-go use, or you work in dimly lit environments, the Easy-Switch’s smaller size and backlit keys will make it worth the additional $20.

Note: When you purchase something after clicking links in our articles, we may earn a small commission. Read our affiliate link policy for more details.
At a Glance
Related:
Shop Tech Products at Amazon