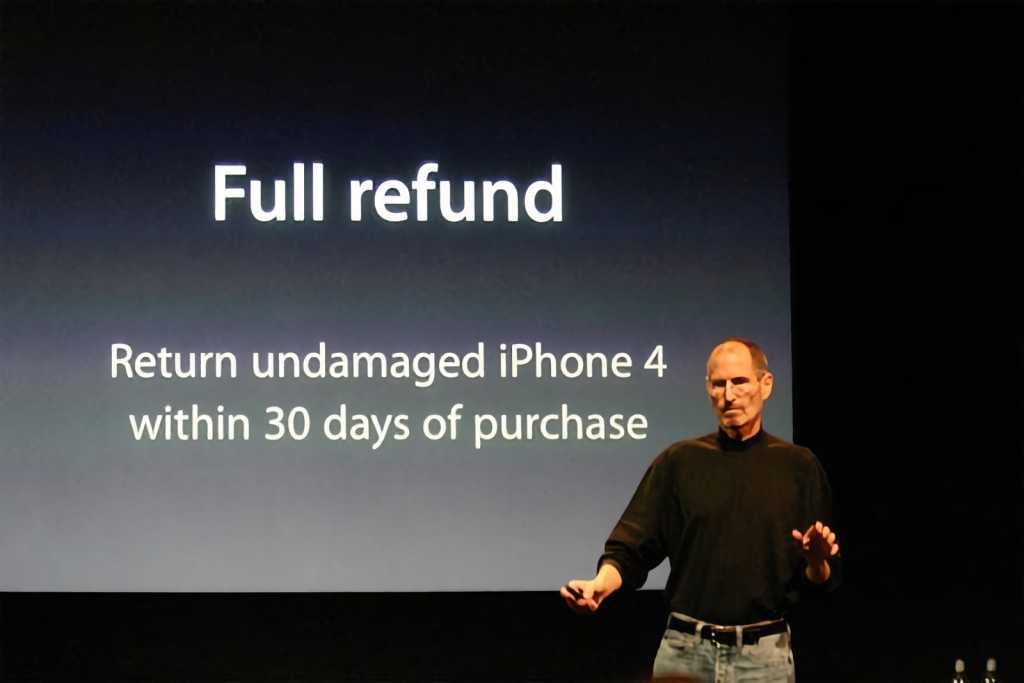 Apple will give iPhone 4 owners a free case to address problems some users have reported with the new phone’s antenna—an issue that affects the entire cellular phone industry, CEO Steve Jobs contends. Apple announced its free case offer at a press conference at its Cupertino headquarters on Friday.

The iPhone 4 debuted on June 24 and has proven to be a big hit for Apple—on Friday, Jobs said the company had sold 3 million phones since last month’s launch. But nearly immediately after the phone’s launch some users reported problems with antenna interference. The most common complaint involves the reception bars disappearing from the iPhone’s status bar when users hold the device a certain way, with their fingers covering the phone’s antennas.

Jobs spent much of Friday’s press conference insisting the problem wasn’t unique to the iPhone, showing videos of a Blackberry Bold 9700 and HTC Droid Eris exhibiting the same behavior when users gripped the phones. And the company updated its Website on Friday with a page dedicated to smartphone antenna performance issues.

“It’s a challenge for the whole industry, and we’re doing the best we can,” Jobs said. “But every phone has weak spots.”

Still, Apple says its working to address complaints from users who have had problems with cell reception. On Thursday, the company released iOS 4.0.1, an update to its mobile operating system aimed at more accurately displaying signal strength bars on the iPhone’s status bar. Earlier this month, Apple conceded that it had used the wrong formula to calculate signal strength for all its phones.

Apple also plans to appease iPhone 4 owners with reception problems by offering them a free case for their smartphone. Tests by multiple sources have indicated that wrapping the phone in a protective case like Apple’s $29 iPhone Bumper can prevent the signal attenuation some iPhone 4 owners have reported.

The free case offer is available to anyone who buys an iPhone through September 30 as well as to existing iPhone 4 owners. Users who’ve already bought a bumper will be given a refund, Apple says. Users who bought third-party cases aren’t eligible for the refund.

Asked why Apple had settled on September 30 as the cutoff date, Jobs indicated the company could extend the free case offer beyond that. “We’ll re-evaluate it in September,” he said.”

Because Apple’s hasn’t made enough of its bumpers to meet demand yet, Jobs said the company will offer a choice of cases to customers. Starting next week, iPhone 4 owners will be able to go to Apple’s Website, and apply for a case.

If customers aren’t happy with the iPhone 4—“before or after you get a free case,” Jobs added—they can bring back the undamaged phone within 30 days for a full refund. Jobs said Apple won’t charge a restocking fee and that users would be able to get out of their contracts with AT&T.

Though Apple is offering free cases to iPhone 4 users, it was clear during Friday’s press conference that the company believes the iPhone 4 reception issues have been overblown. According to Jobs, only 0.55 percent of all iPhone customers have called the company’s AppleCare service with an antenna issue. (The company did not provide figures on the percentage of iPhone customers who sought out help from the Genius Bar service at Apple’s retail outlets.) Jobs also noted that the AT&T’s return rate for the iPhone 4 was 1.7 percent, compared to 6 percent for the iPhone 3GS during the same period a year ago. Jobs did concede that AT&T’s figures indicate the iPhone 4 drops more calls per 100 calls than the iPhone 3GS does, but he noted that the 3GS drops fewer than 1 call per 100.

“The data leads you to the conclusion that it’s been so blown out of proportion, it’s incredible,” Jobs said.

Jobs also dismissed a report published Thursday by Bloomberg that Apple had been warned by one of its engineers last year about potential reception problems. Jobs called the report “a total crock.”

“We heard about [reception problems] 22 days ago and have been working our butts off,” Jobs said at one point during the press conference. “It’s not like we’ve had our heads in the sand for three months.”

Still, later comments by Jobs during the press conference indicated the company had some idea that signal strength bars would drop when the iPhone was held a certain way, though Jobs again characterized that as a typical issue for any phone.

“We knew that if you gripped it a certain way, the bars were going to go down a bit like every smartphone,” he said. “And we didn’t think it would be a big problem.”

Jobs also defended Apple’s response to reports of problems with the iPhone 4’s reception, which, until Friday’s press conference, had been limited to a handful of public statements. “The fact we didn’t say anything after a week, it’s because we didn’t know enough [about the issue],” Jobs said. “And it’s taken us a while to get the data. If we’d have done this a week and a half ago, we wouldn’t have had half the data that we shared with you today.”

Asked if Apple would reconsider where it places antennas in future iPhone designs, Jobs demurred. “We’ve been kind of pre-occupied with this,” he said, adding that the company is happy with the iPhone 4’s antenna design. “maybe our wizards in the antenna lab will come up with something better. But we’re not feeling that this is a giant problem we need to fix.”

Apple also addressed problems with the iPhone 4’s proximity sensor on Friday. Some users have said that the sensor—which detects when you’re holding the phone up to your face and disables the screen during calls so you don’t inadvertently press buttons—either doesn’t turn off the display or doesn’t reactive the screen after the call is complete. Jobs says Apple is working on a fix that will be available in the next software update.

Apple has posted a video of its Friday press conference on itswebsite.