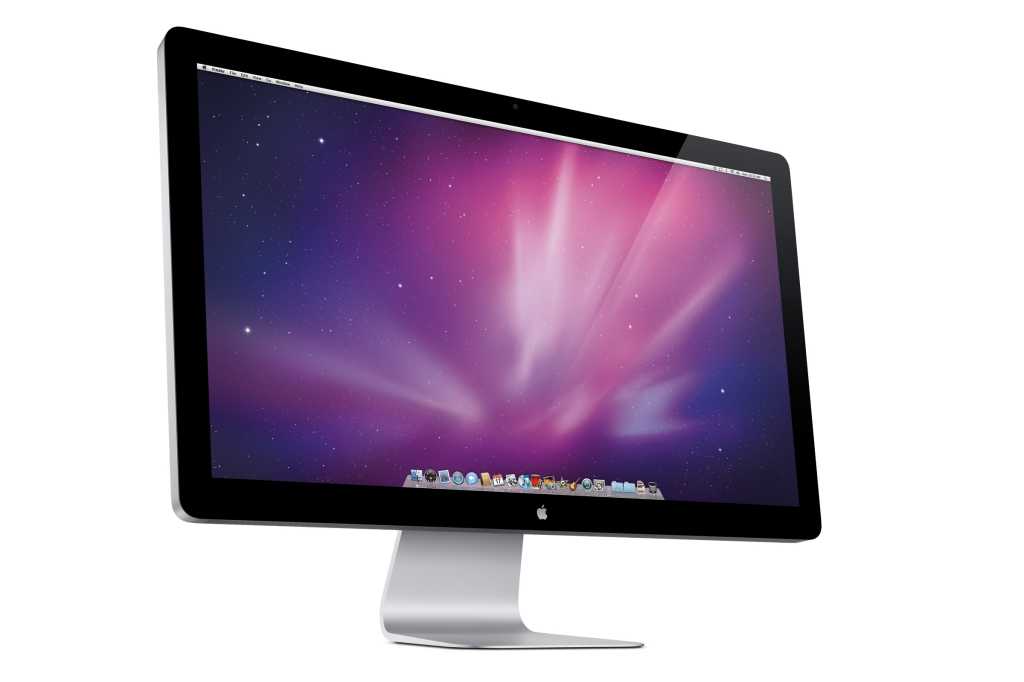 If you’re a fan of the 27-inch iMac, but don’t want to give up the portability of your MacBook Pro or expandability of your Mac Pro, Apple thinks you’ll love its new 27-inch LED Cinema Display. The display is basically a 27-inch iMac without the computer, matching closely that popular iMac’s display in both specifications and design.

Aside from the few inches of aluminum found on the bottom the screen of the iMac, the Cinema Display looks nearly identical, sharing the same flat aluminum stand, black border, curved corners and edge-to-edge glossy glass cover. Like the iMac, the display has built-in speakers and iSight camera.

The Cinema Display lacks many ergonomic adjustment abilities, offering no way to raise or lower the display, or to rotate into a portrait mode. The display can tilt forward and back, but that’s about it. A VESA mount ($29) is sold separately, allowing you to remove the stand and mount it on a wall or a more ergonomic stand. OS X’s Displays Preferences recognizes the LED Cinema Display and offers standard or 90, 180, 270 degree rotation options.

Also identical to the iMac are many of the display’s specs. Both use an IPS panel with LED backlight, 2560-by-1440 pixel resolution, 178-degree viewing angle, 375 cd/m2 brightness, 1000:1 contrast ratio and 16.7 million colors. Its worth noting that many professional-class displays have moved to 10-bit panels offering billions of colors.

On the back of the display are three USB 2.0 ports, a Kensington lock slot, and connectors for power, as well as a captive cable with a three-headed multi-plug with Mini DisplayPort, USB 2.0, and Magsafe power connections. Although adapters for connecting Mini DisplayPort monitors to DVI-equipped Macs exist, Apple doesn’t officially support using the LED Cinema Display on anything but Mini DisplayPort Macs running 10.6.4 or later. It should work with your older system using an adapter, but if you run into a problem, you’re on your own.

The Cinema Display has no buttons. To adjust brightness, you can use the buttons on your Apple keyboard or open the Displays System Preferences pane and move a slider there. You can also turn on or off the ambient light adjustment through Displays Preferences. Other controls, like color temperature and target gamma, can be accessed through this menu by clicking on the Color button and clicking the Calibrate button. I’m not a big fan of the “squint-and-try-to-make-the-Apple-logo-blend-into-the-background” calibration scheme that is still in use with the Mac, and color professionals will most likely prefer a display with greater control over individual colors settings.

We looked at the display side-by-side with an iMac, as well as with some higher-end displays. Using straight out of the box settings, the display is bright but not overblown, with very pleasing colors. Photos looked great, with the glossy screen adding depth to dark areas of the image. With our test unit, I didn’t find any uniformity issues, dead or stuck pixels, or light leakage problems.

The whites and grays on the display were a bit bluish at default settings. Using a Datacolor Spyder3Elite, I calibrated the display to 100 cd/m2 and 6500 degrees Kelvin, and achieved more neutral grays; it also helped bring out a little more of the shadow details in our test photo. The display’s viewing angle was very good, with little loss of contrast or shifting of colors when moving either up or down, or left to right of center.

Of course, since the display has a glass front, glare can be an issue with the display. My workspace is not well suited to a glossy monitor and I found that glare could indeed be distracting on such a large display. I did my side-by-side testing in a windowless room and didn’t have any issues there.

Apple’s 27-inch LED Cinema Display makes a great companion to any Mac that uses a Mini DisplayPort connection, but is especially well suited to Mac portable users who can take advantage of the provided Mag Safe power connector and the display’s USB ports to attach keyboards and other peripherals. Its glossy screen and lack of easily accessible color and ergonomic adjustments might turn off some users, but for most fans of the Mac aesthetic, this display will fit nicely into both their workflow and their workspace.

This review was written by Macworld lab director James Galbraith.