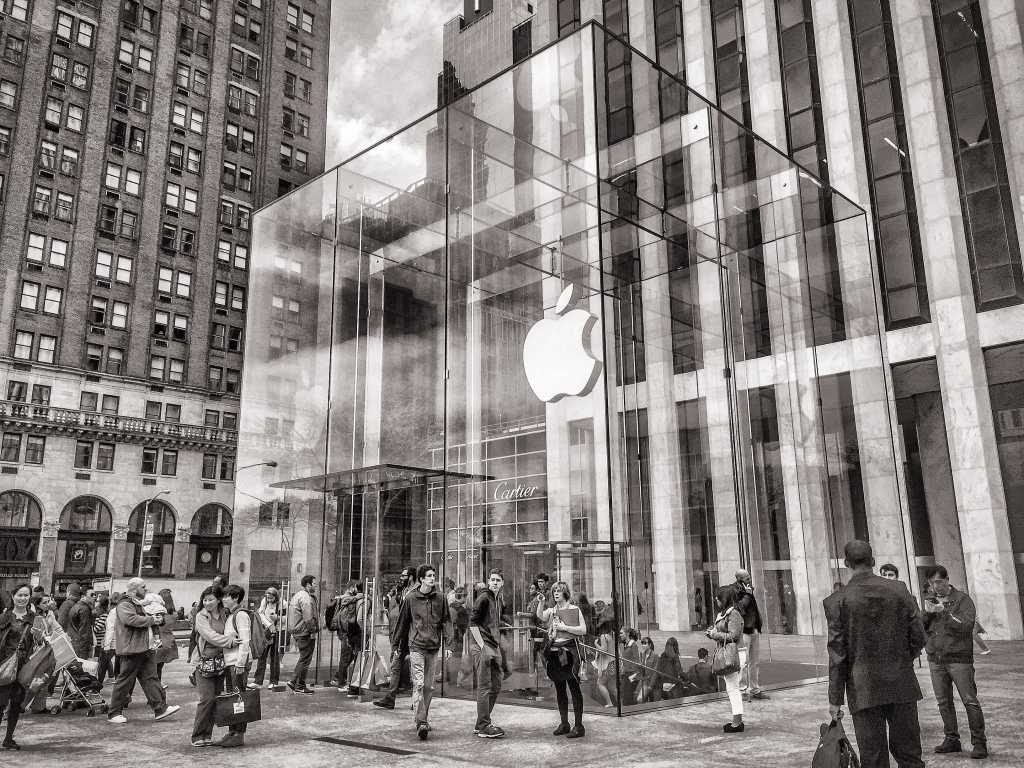 On May 19, 2001, the first two Apple Retail Stores opened their doors in McLean, Virginia, and Glendale, California. Since then, Apple has opened more than 300 stores worldwide. The stores not only provide a showcase for Apple’s products, but also contribute significantly to Apple’s bottom line.

When Apple first announced its retail plans, the company had $4 billion in cash on hand. Retail is an expensive investment, however, and some analysts questioned Apple’s decision to open stores.

Among the naysayers was David Goldstein, then president of consulting firm Channel Marketing. “I give them two years before they’re turning out the lights on a very painful and expensive mistake,” said Goldstein in a 2001 BusinessWeek article. Arne Alsin of Alsin Capital Management said in an article for TheStreet.com, “It’s desperation time in Cupertino, Calif.,” and, “this move is fraught with problems.”

Other analysts were optimistic. Daniel T. Niles, then a Lehman Brothers analyst, said in 2001, “Apple has the ability to start attracting new customers with the launch of their higher-end retail store strategy.” George Rosenbaum of market research firm Leo J. Shapiro & Associates, said in 2001 that the Apple Retail Store was a “brilliant idea.”

Apple was optimistic, too. Even after opening more than 20 stores in 2001, the chief financial officer at the time, Fred Anderson, said that Apple could break even on its retail investment by the end of the holiday shopping season—less than a year after the first store opening in May.

During the announcement of the 2001 fiscal third-quarter results, Apple CEO Steve Jobs said that the opening of the first two Apple Retail Stores was “perhaps the most strategic event of the quarter.” The company opened 25 more stores over the rest of that year. Apple reported total sales of $5.4 billion in 2001, with the Apple Retail Stores responsible for $19 million. Apple did not report whether the Apple Retail Stores generated a profit or a loss, but it’s probably safe to say that they had a negative effect on Apple’s bottom line that year.

Retail sales and profits continued to grow, with new records being set after each year. The Apple retail operation in 2008 reported, for the first time, a yearly profit of over $1 billion ($1.3 billion, to be more exact). In 2010, Apple reported a whopping $9 billion in retail sales and $2.4 billion in retail profit. With such impressive results, it’s not far-fetched to expect the Apple Retail Store to generate well over $10 billion in sales for 2011. In fact, for just the first two fiscal quarters of 2011, Apple reported retail sales of over $7 billion, and a profit of $1.8 billion.

“The interesting number, though, to me, is not the financial results, but it’s the people who come to our stores. Because ultimately a store is about customers,” said Apple senior VP of retail Ron Johnson at a conference in 2006.

Apple didn’t start to report on the number of store visitors until the third quarter of 2002. For about a year after the McLean and Glendale stores opened, there’s no publically available information on how many people visited an Apple Retail Store.

From 2001 to 2006, Apple Retail focused on the Mac and iPods. The iPhone was introduced in 2007, which boosted the number of store visitors—who can forget the long lines? The crowds came out again when the iPad was introduced last year. Whenever a new iPhone or Pad is released, more and more people walk though the doors of an Apple Store, and often they’re buying more than just a device. They’re also buying cases, headphones, and other accessories. And they might even be buying a new Mac to go along with that new iOS device.

“Why has it worked?” asked Johnson in a 2004 speech. “I think it’s all about Apple’s grounding in design being applied to a different business from products—to a retail strategy.”

As the numbers show, there’s no denying that the Apple Retail Stores are successful. They not only generate a significant amount of revenue, but they also serve as a daily showcase for Apple products in an inviting setting that feels more social than sales-oriented.

How does Apple maintain the momentum that the Retail Stores have? It’s the products that bring people in the doors, and right now the iPhone and iPad are what people come to see and buy. It’s quite possible that when the smartphone and tablet markets mature, demand for those products will not be as high as they are now. That will take several years, however—years that Apple has to come up with its next big thing.

When Apple announced its plans for the Apple Retail Stores over 10 years ago, many had doubts that the stores could be a success—after all, similar attempts by other computer makers had not fared well. But as the numbers show, the Apple Retail Stores are big money makers and, as analyst George Rosenbaum put it, a “brilliant idea.”

[Sales data was provided by ifoAppleStores.com.]