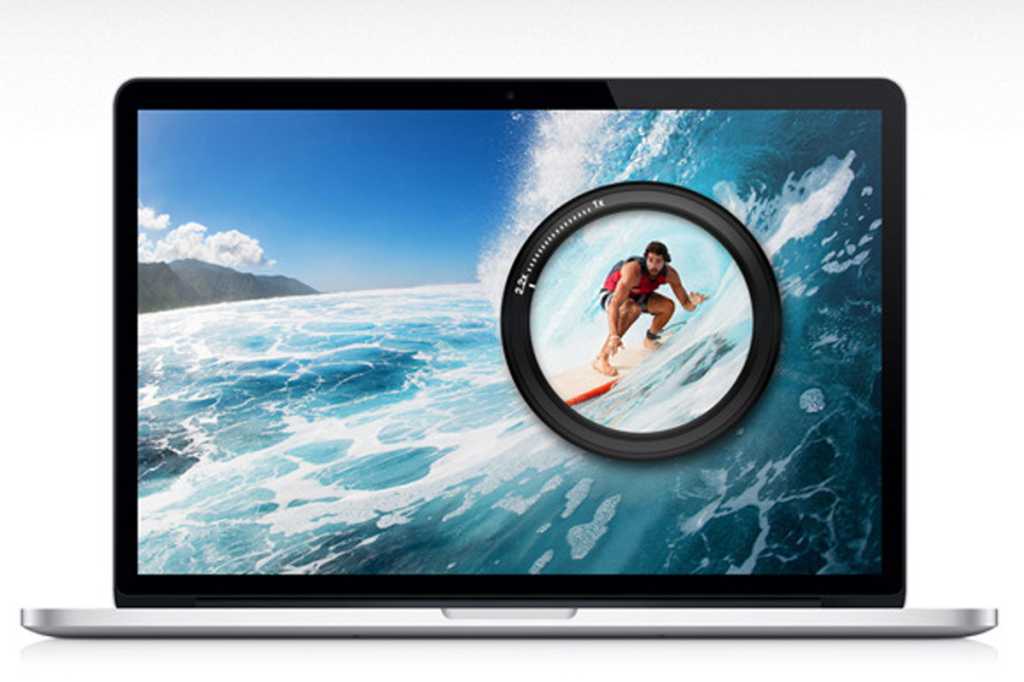 When Apple released the 15-inch Retina MacBook Pro (), it was only a matter of time before the Retina display made its way to other Apple laptops. That time is now, and with the 13-inch MacBook Pro with Retina display, a compelling argument can be made that Apple’s newest laptop is a perfect combination of performance, portability, and features.

If you’ve eschewed 13-inch laptops because they don’t offer enough on-screen real estate, it’s time to reconsider. The 1680-by-1050 setting (what OS X calls More Space) gives you more room to work, and with the help of third-party software such as the free QuickRes (), you can use scaled resolutions that go beyond 1680-by-1050. For example, QuickRes can set the Retina display to a mind-boggling 3360-by-2100 resolution, which made the icons and text on screen much too small for my eyes. (It’s possible that using the Retina MacBook Pro at these very high-scaled resolutions can adversely affect performance, though I didn’t record any benchmarks at these settings.) You can also use third-party software to set the laptop at its native 2560-by-1600 resolution.

Unless your eyes can’t tolerate the small on-screen sizes, it’s hard to argue that you can’t get enough workspace on a 13-inch laptop with a Retina display. Of course, some apps and tasks do work best with a 15-inch screen, but I bet some longtime users of the 15-inch MacBook Pro will decide that it’s time to switch to a 13-inch Retina model.

The Retina display is an in-plane switching (IPS) panel, which allows for a wide 178-degree viewing angle. The display also has less glare than the non-Retina MacBook Pro; Apple says it has reduced glare by 75 percent. While we didn’t gauge the exact amount of glare, you can see a noticeable difference, for the better.

A problem, though, is the Web not catching up to this technology. Many websites still don’t use high-quality images, instead optimizing for data throughput. On a Retina MacBook Pro, it’s possible that you’ll see websites with crisp text, but images that are a jaggy mess. Another issue is whether some programs you may use can take advantage of the Retina display. Apple has updated its own software, and the list of Retina-friendly apps from third parties is growing, but it’s quite possible that your favorite software hasn’t yet been updated for Retina. It’s just a matter of time, though, before most software and Web developers update their products for Retina displays.

Smaller than a 13-inch MacBook Air

If you thought the 13-inch MacBook Pro was still too heavy and you decided to go with a MacBook Air, that may not be the case anymore, depending on your tolerance for the weight.

The connectors on the side of the 13-inch Retina MacBook Pro mirror that of its 15-inch sibling. One side has a MagSafe 2 connector, two Thunderbolt ports, a USB 3.0 port, and a headphone jack. The other side has another USB 3.0 port, HDMI video-out, and an SDXC slot. Also, each side has a set of three air vents that also output low-frequency sound.

Apple offers two standard configuration models of the 13-inch Retina MacBook Pro. Both models have a 2.5GHz dual-core Core i5 processor (Turbo Boost pushes that up to 3.1GHz), 8GB of memory, and an integrated Intel HD Graphics 4000 GPU. The $1699 model has 128GB of flash storage, while the $1999 model has 256GB.

The 8GB of 1600MHz DDR3L onboard memory cannot be reconfigured to add more memory. The memory is built into the motherboard instead of using slots and RAM modules. It’s 8GB, and that’s it, unlike the 15-inch Retina MacBook Pro, which comes standard with 8GB and can be customized at the point of purchase with 16GB of memory. The 13-inch non-Retina MacBook Pro and the 13-inch MacBook Air support a maximum of 8GB of memory, so it seems that the 13-inch frame has space limitations that prevent more memory from being installed.

Apple doesn’t offer much when it comes to build-to-order options. You can upgrade the processor to a 2.9GHz dual-core Core i7 (with Turbo Boost up to 3.6GHz) for $200. Flash storage upgrades are also available to 512GB or 768GB, with prices ranging from $300 to $1300, depending on which model you are customizing. The flash storage isn’t considered a user-upgradable part, so you need to decide at the point of purchase if you want more storage.

The Macworld Lab used Speedmark 8 to see how well the 13-inch Retina MacBook Pro performs. In general, the new Retina laptop benefits from having flash storage instead of a hard drive.

While the 13-inch Retina MacBook Pro won, overall, over the $1499 13-inch non-Retina MacBook Pro with a 2.9GHz dual-core Core i7 processor, the latter model did beat the Retina laptop in CineBench’s CPU and GPU tests, the file-compression test, Portal 2, and MathematicaMark.

The 13-inch Retina MacBook Pro was only 11 percent faster than the current 13-inch MacBook Air with a 1.8GHz dual-core Core i5 processor. Keep in mind, however, that because of the smaller profile, the processor in the MacBook Air will throttle itself down during heavy-duty processing tasks in order to maintain an optimal operating temperature. While we didn’t experience that in our Speedmark testing, we have seen it happen.

You can get a complete look at the 13-inch Retina MacBook Pro performance test results, which includes scores in the individual tests that make up Speedmark 8.

The 13-inch Retina MacBook Pro has a 74-watt-hour lithium-polymer battery. Apple says that the battery life can last up to 7 hours, based on “wireless Web” usage. Our battery life test is more rigorous. It involves playing a video in a continuous loop until the battery is drained.

The Retina MacBook Pros use MagSafe 2 connectors. If you have an older MagSafe adapter you want to use, you need the $10 MagSafe to MagSafe 2 Converter.