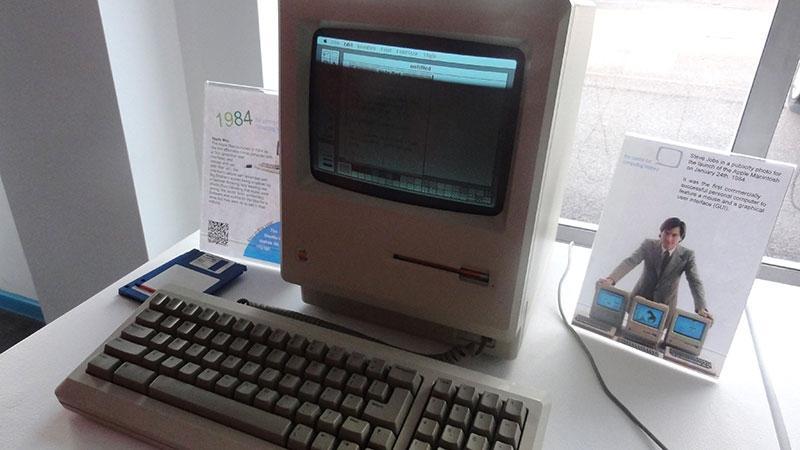 Editor’s note: The following article is reprinted from Macworld U.K. Visit Macworld U.K. for the latest Mac news from across the Atlantic.

On January 24, 1984, Apple revolutionized the computer market with the brilliant Macintosh 128K. Apple’s computer became the blueprint for other companies making computers.

What you first notice about an original Macintosh 128K is the familiar structure of the computer, keyboard, and mouse. It’s unlike computers from 10 years prior to the Macintosh 128K, like the Altair 8800. The physical shape of the Macintosh 128K body—with the screen and computer housed in a single unit—is also a delightful sight to anybody who’s used a modern Mac.

The Macintosh 128K is, at the same time, much smaller and bulkier than most computers that exist today. The unit itself seems quite small, but the keyboard and mouse are almost comically huge. While the modern iMac appears to be a virtually floating screen, the Macintosh 128K has a lot of “Mac” surrounding the small screen.

By today’s standards, the Macintosh 128K’s screen is tiny. It’s a diminutive 9-inch CRT with a screen resolution of just 512-by-342 pixels—marginally smaller than an iPad screen, although it has a much lower resolution (lower even than the original iPhone). The bulk of the Macintosh 128K itself makes the display seem much smaller.

The screen is also black and white, a bit of a curveball—we haven’t used a monochrome computer in many years. And the screen’s curvature makes it undeniably retro.

There’s no getting away from the keyboard and mouse. Both feel incredibly chunky. The keyboard has a 1970s feel to it, even though it is from the 1980s.

In terms of design, though, it is beautiful. It has the familiar Shift, Option, and Command keys, although only on the left side. On the right side sits a backslash key. The keyboard has a comfortable “thunk” when typing and it feels very much like a keyboard built to last—after all, it’s still usableall these years later.

The mouse on the Macintosh 128K is an original M0100 model. It does exactly what it’s supposed to: move the cursor around the screen. It has a single button.

Underneath the mouse is a scroll ball, which were used before modern mice use optics. A large circular dial keeps tha ball in place; turn it, and you can remove the ball, which had to be done frequently for cleaning.

Apple’s mouse is tremendously important in the annals of computing history. It truly popularized the mouse as an input device, as well as the graphical user interface. It’s also a very good mouse, easy to hold and click. We can see why the design didn’t really change that much for the next 20 years.

Using the Macintosh 128K is where it truly gets interesting. Despite running an operating system that is several decades old, the combination of GUI, mouse, keyboard and screen makes it remarkably easy to pick up and use. It is divine.

The Macintosh 128K’s operating system is surprisingly responsive. We were expecting it to crawl along, but the cursor moves with the mouse with little lag, and menus and programs open with reasonable responsiveness. The only hold up is when the computer accesses the floppy disk—there is no hard drive. When the disk is being accessed the interface is unresponsive, although the cursor still moves around.

Also interesting is how familiar the interface is to anybody who has used a Macintosh. The menu bar remains at the top, and on the top-left is an Apple menu. Click it to reveal About the Finder and a selection of apps. To the right are File, Edit, View, and Special menus. There is a desktop and in the bottom-right there is a Trash can. There is no Dock (that didn’t come until Mac OS X) and no Launcher, either (Macintosh 7.5).

Choosing an item from the Apple menu launches a window with the app. One thing we noticed is that the menu doesn’t change for each app, as it does now. Instead, it remains with just the Apple, File, Edit, View, and Special options. The apps are lightweight and feel more like Widgets. You can arrange them on top of each other.

Aside from the built-in software you can also load MacWrite and MacPaint. We loaded a version of MacPaint, and while it’s clearly not much compared to modern apps, it’s remarkable how modern it is.

What’s also striking is the comprehensive tool palette on the left, with familiar tools like marquee, lasso, and fill. These are icons that are still used in Photoshop today. At the bottom are brush thickness and pattern options. The palettes are fixed in place, but all held in separate windows. In MacPaint, the Menu bar now changes to offer additional options like Font, FontSize, and Style.

A quick look at the Macintosh 128K’s Control Panel reveals a more graphical presentation than the modern incarnation. And there are lots of metaphors, like the tortoise and the hare to adjust mouse speed, and graphical representation of a volume slider. It’s quite easy to figure out what most of the buttons are for.

The original Macintosh 128K is a wonderful machine. It’s obviously a little cruder than modern Macs, and we’d be at a loss for how to put it to practical use today. But it remains a fine machine for writing articles, drawing diagrams and experimenting. If anything, we’re amazed by how fresh it feels. We can only imagine how inspiring it must have been to use one for the first time in 1984.