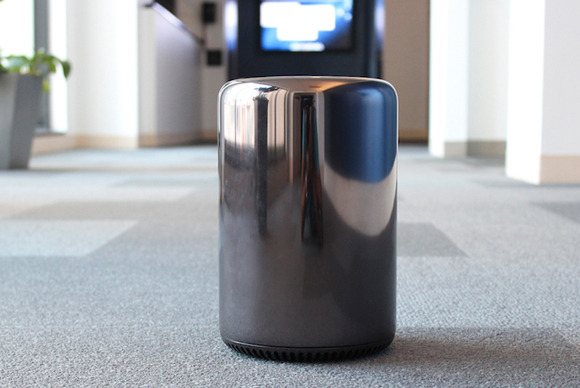 Even four months after the Mac Pro’s initial release, Apple appears to be having problems making enough of the high-end cylindrical desktop computer. The company’s store currently shows shipping times of 4-5 weeks for all Mac Pro models, even the stock versions without additional customizations.

Computerworld (which, like Macworld, is owned by IDG) points out that the supply constraints for the new Mac Pro are now worse than that of the iMac back in late 2012 and early 2013, which Apple CEO Tim Cook described as one major cause of the 22-percent decline in Mac revenue the company experienced in that quarter.

Of course, the Mac Pro is no iMac or MacBook, the product lines that make up the vast majority of Mac sales. As such, delays in the Mac Pro cycle won’t have nearly the same impact on Apple’s bottom line as those of the iMac did last year. And even the iMac’s impact was fairly minimal, as the Mac line makes up only a modest chunk of Apple’s revenue: just 11 percent in the last quarter. Mac revenue has, in general, been trending downward since the introduction of the iPad, and that trend will likely continue as sales of tablets and smartphones continue to rise.

So, the Mac Pro, which makes up a very small part of a very small business line for Apple likely won’t materially impact Apple’s bottom line, but the production issues could still hurt Apple’s image. Consumers expect a company like Apple, with its mountains of cash, to be able to quickly resolve any production issues—at least those within its control. So why hasn’t the supply-demand curve on the new Mac Pro evened out by now?

While we don’t know the exact reasons for the delay, a few likely contenders jump to the top of the list. First, and perhaps most probable, is the manufacturing process itself. Apple chose to invest some $100 million in a new manufacturing plant in the U.S., with the Mac Pro being the first Apple product to receive the “Assembled in the U.S.A.” treatment.

Analyst Horace Dediu of Asymco told Macworld that new factories “tend to run below peak capacity” as they get up and running, and that those constraints can play a role in why shipping times haven’t improved.

Similarly, when a company rolls out a new product, it makes educated guesses as to how many units it needs to produce in a day, week, or month in order to meet the demand for the product. Dediu further noted that the production capacity was “probably not designed to meet initial demand but rather the long term level of sales, which is not very high given the price and market size.”

If Apple did in fact choose to set its production levels for the long-term, that would largely account for the shipping delays, as there tends to be a rush of buyers when a product firsts hits the market, with demand flattening out over time.

So, even though early demand may be higher than Apple expected and it can take a while to get a new plant running up to full capacity, the effects this will have on Apple’s image and bottom line is minimal. The Mac Pro delays may be the worst in recent memory for Apple, but they only impact a handful of the company’s customers—most of whom are probably willing to wait for the new machine anyway.

Regardless of the underlying reasons, analysts are likely to quiz Apple CEO Tim Cook about the delays during next week’s quarterly earnings call, even if it doesn’t have a hugely material impact on the company’s figures.