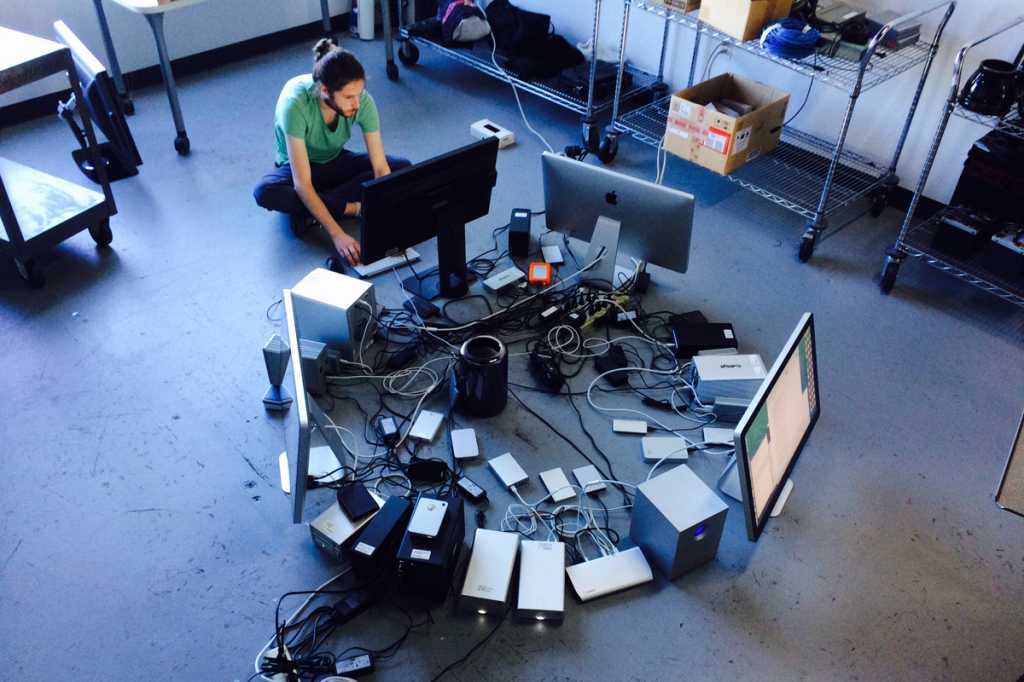 A Thunderbolt daisy chain can support six connected peripherals per port. And the Mac Pro has six Thundebolt ports, four more than any other Mac. The Mac Pro also has four USB 3.0 ports, one HDMI port, and two gigabit ethernet ports, so you can connect a lot of devices to one Mac Pro.

Macworld Lab came up with the Mac Pro Daisy Chain Challenge: How many devices can we round up, connect, and use on a single Mac Pro. (Click here to see a higher-resolution version of the above photo.)

Here’s a list (in alphabetical order) of the storage devices connected to one Mac Pro.

We connected 36 drives (19 Thunderbolt, 15 USB, 2 FireWire 800) with a combined capacity of 100.63TB. In addition to the drives, we also connected two Thunderbolt docks (the Belkin Thunderbolt Express Dock and the CalDigit Thunderbolt Station), an Apple Thunderbolt Display, two Apple Cinema Displays, and one HP Z Display Z27i. All this to a single Mac Pro.

While a dozen or so of these drives were bus-powered, most required external power. We plugged 24 power cords into three power strips and plugged each of those strips into a Watts Up power meter. When running a script that copied data from the Mac Pro’s internal PCIe connected flash storage to each of the drives, the combine power draw peaked at a whopping 865 Watts.

The script also tracked the amount of time it took each drive to write 6GB of data. The fastest was OWC’s Mercury Helios, which was able to write at an average of 271 MBps with all other drives running. In second place was the Promise Pegasus2 R6, which wrote the data at an average of 199 MBps. Bringing up the rear were an unlucky few drives connected to the USB 2.0 ports of an Apple Cinema Display. They only managed to write at 3 MBps.

Looking at OS X’s Activity Monitor during this operation, we saw overall throughput of around 3 GBps with all the drives running. As the faster drives finished the task, the overall rate slowed dramatically.

We also tested to see how having all of these drives connected might affect performance of a single device. We took the Promise Pegasus R6 and ran four different read/write tests, with the R6 in different locations in a daisy chain. When located at the beginning of a six-device chain, with all the drives attached, the R6 posted an average write speed of 709.8 MBps and read speed of 584.7 MBps. Moving the R6 to the end of that chain with all other drives still attached, the average write speed dipped to 556.7 MBps while read speeds were pretty much unchanged at 591.5 MBps. Repeating that test with only the Pegasus2’s chain attached did not affect performance at all.

Finally, we connected the R6 directly to the Mac Pro with no other drives attached. Those results were nearly identical to the first test, with the R6 at the beginning of the chain and the other drives mounted on the desktop. In this case, placement in the chain is more important than the presence of other devices.

Have some tests you’d like to see run? Let us know in the comments.

Editor’s note: Updated on 4/25/14 to correct the list of LaCie drives. We incorrectly stated that LaCie Thunderbolt 2 products were used. Also corrected the links to Elgato’s Thunderbolt Drive+.