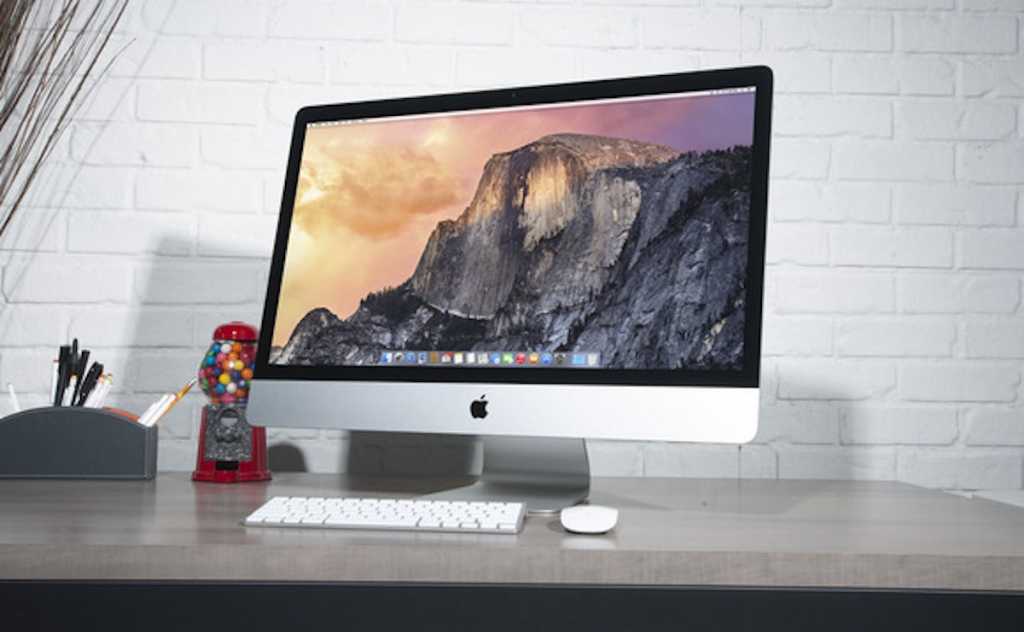 Among the many new and improved technologies promoted by Apple, one of the most attractive has been the “Retina display.” This is a marketing term rather than a technical one and refers to displays with a pixel density where individual pixels are indiscernible to the human eye. You see it touted for iOS devices as well as Apple’s MacBook Pros. Like much of Apple’s marketing, it’s catchy and appealing to those who’d prefer to not dig deeper. However, there are occasions when the term just won’t do—particularly when Apple wants to boast about the specific number of pixels that a display houses. Such is the case with the $2,500 iMac with Retina 5K display (). And it wants to boast for good reason. The display is stunning.

Just how good is the display?

Specifically, this iMac projects 14.7 million pixels (at a native resolution of 5120 x 2880 resolution), which is four times the pixels offered by the standard 27-inch iMac. And it does so, according to Apple, while using 30 percent less power. This is accomplished through the use of more efficient LEDs along with a special timing controller that coordinates the pixels. Additionally, Apple has introduced something it calls Compensation Film, which helps ensure solid contrast even when viewing the display off-axis.

I had the opportunity to test the base model iMac with Retina 5K display alongside a late 2012 27-inch iMac, and did so largely to compare the look of each display. At first glance, when viewing Yosemite’s default desktop on each iMac, I didn’t see a great difference between the two. With brightness cranked all the way up on each, the Retina iMac was brighter than the other but otherwise I’d have been hard pressed to tell one from the other. Off-axis viewing was slightly better on the new iMac—the display was clear up to about 45 degrees off-axis—but the difference wasn’t breathtaking.

However, when I moved in closer, the menu bar text on the older iMac appeared hazier than that on the Retina display. As I opened a window the difference was more apparent as text was clearly sharper on the Retina iMac. It’s not radically different however—not like switching from a first- or second-generation iPad to an iPad Air, for example. Rather, it’s a bit like having your eyes examined and looking through one lens that’s very slightly blurry and another that’s tack sharp.

It’s when you zoom in on text and high-resolution images that you see just what the Retina iMac is capable of. The images below were taken from iBooks, using the zoom feature built into OS X. As is clearly apparent, the text pulled from the older iMac is far less crisp than the text displayed on the Retina iMac.

Obviously, most of us don’t spend our time zoomed in hundreds of percent to admire our Mac’s screen resolution. In many cases the benefits of the Retina display will be subtle—an effect that may make staring at a display for hours on end less fatiguing. Where you’ll see differences that can be startling is in very high-resolution images and video. The example below should give you some idea of the difference in details with a high-resolution image. Note the crisper lines in the bottom image, taken from the Retina iMac. (Click each image to enlarge.)

How good is the performance?

The iMac with 5K Retina display is being touted by some as a viable alternative for professionals who can’t quite make the jump to Apple’s new Mac Pro. After all, it offers a display that, from another manufacturer, would cost the $2,500 Apple asks for the iMac. The base model includes a 3.5GHz quad-core Intel Core i5 processor, 8GB of memory, a 1TB Fusion Drive, an AMD Radeon R9 M290X graphics processor with 2GB of GDDR5 memory, two Thunderbolt 2 ports, four USB 3 ports, and 802.11ac wireless. That’s a mighty powerful package. But can it can come anywhere close to Apple’s top of the line Mac?

I thought I’d find out by conducting a few performance tests between it, Apple’s top of the line Mac Pro (3.5 GHz 6-Core Intel Xeon E5 with 16GB RAM), and the late 2012 27-inch iMac (with a 3.2 GHz Intel Core i5 with 8GB RAM). The Mac Pro and Retina iMac, with their SSD and Fusion drives, respectively, have a significant edge in regard to reading and writing data—the older iMac’s spinning hard drive just can’t match their speed. So I chose tests that focused on processing and graphics power rather than disk-intensive tasks. Here’s what I found.

For those who like raw performance numbers, I ran Cinebench’s CPU and OpenGL tests on each computer. The Mac Pro scored an average CPU score of 930, the Retina iMac scored 530, and the older iMac, 452. This is a multi-core test.

In the single core test, however, the Retina iMac bested the Mac Pro. The Retina iMac scored 142, the Mac Pro 133, and the older 27-inch iMac, 125. This is in line with other reports on the iMac’s single-core performance. In Cinebench’s OpenGL tests it also came out ahead, producing an average 88 frames per second versus the Mac Pro’s 72 fps and the older iMac’s 56 fps.

Performance numbers are all well and good, but how does the Retina iMac handle the kind of chores that professionals conduct day in and day out? I tested this as well.

I began by asking each Mac to bounce a dense Logic Pro X project to a 16-bit AIFF stereo track. The Mac Pro accomplished the job in 50 seconds. The Retina iMac took 1 minute 12 seconds, and the older iMac, 1 minute and 29 seconds.

I then imported into Final Cut Pro X a five minute 1080p clip, bumped up the clip’s volume by five points, applied three effects to it (50s TV, Vignette, and Super 8mm), and exported it as a 720p video using the Apple ProRes 422 codec. The Mac Pro did the job in 54 seconds, the Retina iMac finished in 1 minute and 9 seconds, and the 2012 iMac accomplished the task in 1 minute and 30 seconds.

(Previous to this, I exported the same clip with effects using Final Cut Pro’s Apple Device 720p preset. In this case each iMac outdid the Mac Pro, with the Retina iMac doing the job in 1 minute and 26 seconds, the older iMac in 1 minute and 47 seconds, and the Mac Pro coming in last at 2 minutes and 31 seconds. This can be explained by the iMacs taking advantage of Intel QuickSync Video, which allows i5 and i7 Macs to render H.264 video more quickly than can Macs with Xeon processors.)

To hit each Mac as hard as I could, I then ripped the Maximum Movie Mode track from the Blu-ray disc of 2009’s Sherlock Holmes and ran the resulting .mkv file through HandBrake, using the Apple TV 3 preset. It took the Mac Pro 1 hour and 36 minutes, the Retina iMac finished second at 2 hours and 24 minutes, and the older iMac pulled up the rear at 2 hours and 53 minutes. During this process the Retina iMac’s fan came on about four minutes into the process and didn’t stop until the job was complete. The older iMac’s fan, however, remained quiet throughout.

Given the results of these tests, it’s pretty clear that for tasks that take advantage of a processor’s multiple cores, the Mac Pro remains the champ. And for a computer that costs $1,500 more than the Retina iMac, it should. That said, in regard to single-core tasks, the Retina iMac appears to be the faster machine. So while well-heeled audio, video, and image professionals may not prefer the Retina iMac, typical users will. And, after all, that’s the primary point of today’s iMac—a computer powerful (and beautiful) enough for just about everyone.

The iMac with Retina 5K display has a lot going for it. The display is gorgeous, at $2,500 it’s like getting a free computer with your high-resolution display, it has enough ports to please all but the most demanding user, it won’t jack up your power bill, and it’s no slouch when it comes to performance. Apple should be proud to have made such a thing. You’ll be just as proud to own one.

Chris has covered technology and media since the latter days of the Reagan Administration. In addition to his journalistic endeavors, he's a professional musician in the San Francisco Bay Area.