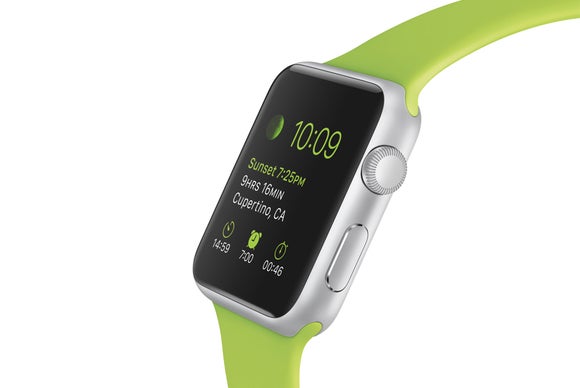 As many reviewers have noted, the Apple Watch offers a surprising amount of depth for a first-generation device. Besides telling time, it’s very good at tracking all kinds of fitness statistics, and at motivating its wearer towards leading a more active lifestyle. It also works well with iOS’s notification system, and its integration with Siri is top-notch.

Unfortunately, the richness of the Apple Watch’s built-in software is not matched by third-party apps, many of which seem to suffer from a distinct lack of purpose and functionality that are bound to make us wonder whether what we have now is all we’ll ever get out of the Watch.

Given the anticipation that Apple built around its latest product, this is perhaps a little disappointing, but there are perfectly good reasons behind the status quo, and a definite possibility that things will improve very rapidly in the near future.

While undoubtedly a great feat of engineering, the Watch’s design is not without its compromises. Apple obviously had to strike a balance between the device’s power and its size—after all, nobody would want to wear the world’s most powerful computer if its battery were the size of a brick.

To minimize power consumption while still providing users with the kind of responsiveness and smooth animations that we have come to expect from an Apple device, the Watch simply offloads most of its computational work to its paired iPhone, using technologies that the company first introduced last year with the launch of iOS 8.

What we think of as a “Watch app” is really a combination of three different components, each with a specific function. The first is called a “host app.” This is your traditional iOS software, which runs on the iPhone and provides the kind of functionality that we have come to expect from our pocket devices.

Apple calls the second piece of the puzzle a “WatchKit Application,” but this moniker is deceiving. The only part that actually resides on the Watch itself, this bundle of data contains user-interface elements, like buttons and images, that are ultimately displayed on the screen strapped to your wrist, but does not include any code at all.

An extension behind the curtain

The magic happens in the final component of the trio, a collection of code called a  WatchKit Extension that runs on the phone and uses Bluetooth to interact with the user interface stored on the watch.

The advantages of this arrangement are fairly obvious. First, the bulk of the battery-consuming operations—calculations, networking, and so forth—take place on the iPhone, a device whose power usage Apple has had years to perfect and optimize. Secondly, it makes near-instant Watch developers out of anyone who has experience writing iOS software, which offers some explanation for the remarkable 3000 apps available at launch. Plus, as an added bonus, the Watch and iPhone app can share code through the extension, leading to less duplication and fewer bugs.

On the flip side, the current state of affairs means that, from the point of view of a developer, the Watch is essentially little more than a tiny external screen with touch capabilities. Most of its advanced sensors and functions, like the microphone, accelerometers, and Digital Crown, are entirely out of reach, and even something as simple as displaying an animation requires pre-rendering every individual frame, uploading it to the Watch, and then playing it back.

More power than meets the eye

If you were waiting for some good news, here it is: Despite its diminutive size, the Watch itself packs quite a powerful punch, and is capable of much more than Apple is allowing developers to do right now.

I can think of a few good reasons for Apple to take such a conservative approach when it comes to third-party software. The first is that most developers had essentially no physical access to a Watch until after their apps had hit the App Store. If you’re disappointed by the paltry amount of functionality offered by today’s crop of software, imagine how unhappy you’d be if you had to deal with apps that perform poorly or are unusable because they were developed blindly without access to real hardware.

Instead of giving developers a free hand, Apple (perhaps wisely) decided to only open up a tightly defined set of functionality that third-party apps could safely take advantage of, knowing that the resulting code would work reasonably well once in the hands of customers. This avoided a potential disaster that could have cost developers time and money, and perhaps permanently tarnished the Watch’s reputation in the minds of consumers.

It’s also possible that Apple wanted to give itself some time to figure out exactly how users would interact with the Watch in the real world. I imagine that a downside of developing products in secret, like the folks from Cupertino are wont to do, is that it’s sometimes hard to predict how they will be used once they are in the hands—or, as the case may be, on the wrists—of a large number of customers. Thus, better to err on the side of less functionality, and then iterate later once usage patterns become easier to understand.

Better may be just around the corner

With Apple’s annual World Wide Developer’s Conference just a few weeks away, improvements to the Watch experience may be coming our way very soon.

What the company has in store (including, I suppose, nothing) is anybody’s guess, but there are a couple areas in which speculation holds up better than others.

One is the ability for third parties to gain direct access to the many sensors that are on the Watch, including its heart rate monitor (and alleged pulse oximeter), accelerometers, and microphone. This would allow apps to offer more functionality, and perhaps give developers an opportunity to come up with new features that even Apple hasn’t thought of yet.

The ability to run code directly on the device could also open the door to more interactive apps by allowing developers to design richer user interfaces with more responsive elements.

Currently, this is made impossible by the fact that Bluetooth communications introduce a noticeable amount of lag between the time when the user taps the screen and the code running on the iPhone can react to the input, but perhaps Apple’s engineers will be able to strike a middle ground in which some functionality can run directly on the device, while the bulk of the work still takes place on the phone.

Ultimately, the ball is now in Apple’s court. Regardless of what new features the company has in store for developers, however, I think that it’s safe to say that there is plenty of room for apps to grow and evolve, and to make the Watch an even better device than it already is.