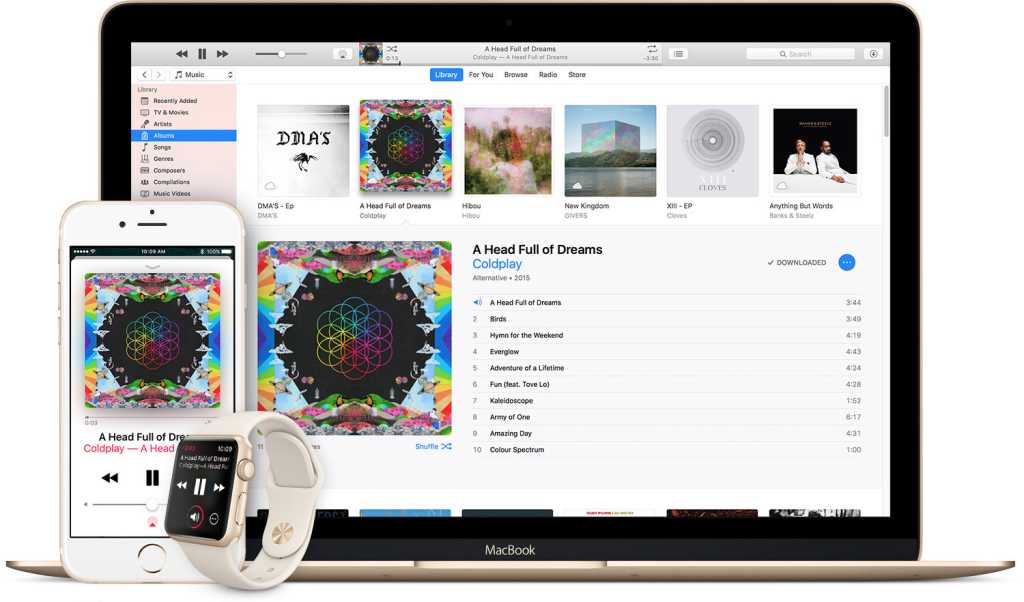 Apple singlehandedly turned the digital music marketplace on its head when it launched the iTunes Store in 2003. Since then, the iTunes Store has evolved into Apple Music, a music streaming service to compete with the likes of Spotify, Tidal, and other services.

Whether you’re new to Apple Music or have been a subscriber since day one, there’s a lot to take in—especially if you’re considering jumping ship from another service. Our guide to everything Apple Music can help set the record straight.

What the heck is this thing? Apple Music combines subscription-based music streaming with global radio-like programming. It’s an all-you-can-eat service for subscribers: Pay a flat fee, and you unlock all of Apple Music’s extensive 60 million-song library.

The Music app, which is how you use the service, comes pre-installed on all new iPhones, iPads, iPod touches, and Macs. You can also access Apple Music on the web at music.apple.com.

Isn’t Apple Music the same as the iTunes Store? Not at all. The iTunes Store is all about media ownership, functioning as both a virtual record store and an efficient digital library for music that you own personally. On the iPhone, iPad, and iPod touch, you’ll find an iTunes Store app separate from the Music app.

On the Mac, the iTunes app went away; Apple released new Music, Podcasts, and TV apps. The iTunes Store is now a section of the Music app and you can still buy music there.

If the iTunes Store is about buying music, then what is Apple Music about? Apple Music is all about streaming. You pay a flat fee to unlock access to Apple Music’s entire catalogue, but you don’t actually own the music you listen to. The files don’t live individually on your devices; you’re instead just listening to tracks stored remotely, that are owned by Apple. If you subscribe to any other media streaming subscription service—be it a music-only service like Spotify or Tidal, a TV service like Hulu, or a movie/TV combo service like Netflix or HBO Now—Apple Music functions the same way.

Is iTunes dead? Not exactly. It has taken on new forms. You can access your entire iTunes library from within Apple Music—just tap the My Music tab (think of your iTunes library now as your music library). The iTunes Store still exists if you prefer to continue to buy music à la carte.

If you had TV shows and movies in iTunes, you will find them in in the TV app.

What makes Apple Music different from Spotify/Tidal/every other music subscription service? Apple puts a lot of emphasis on Apple Music’s Beats 1 and its curated playlists.

Beats 1 is its radio offering, which features an around-the-clock worldwide live broadcast from DJs based in Los Angeles, New York, and London. It delivers a curated selection of songs, pop culture news, and interviews with artists.

Speaking of curation, Apple Music also offers up recommendations tailored to your tastes, looking at artists you like and serving up other artists and playlists for you to listen to. But instead of being built by algorithms, they are built by real people, according to Apple. You can find these in the For You section of the app—but first you’ll have to set it up by following the prompts to select genres and artists you like.

Apple Music’s library has over 60 million songs. Oh, and you can also watch music videos without ads, and check out Apple’s exclusive original content.

Apple Music used to have an artist-based social networking feature called Connect. Artists were able to share special content with fans through Connect. For example, hip-hop artist Drake used the service to post behind-the-scenes photos of his life, share snippets of new songs, and other content. But Apple discontinued the Connect service.

How much does this cost? Apple Music costs $9.99 per month, or $14.99 per month for a family subscription for up to six people (which requires iCloud Family Sharing). College students can subscribe for $4.99 per month.

Can I try before I buy? Yes. Apple offers a free trial for new subscribers. If you cancel during the trial, you do not get another opportunity at a free trial.

Is there a free, ad-supported version? Sadly, no. Some aspects will be available to anyone who logs in with an Apple ID—namely, Beats 1, and the ability to listen to Apple Music radio stations with a limited number of skips. But a paid subscription is required to access Apple Music’s entire library.

What devices can I use this on? Apple Music is available for all iPhones, iPads, and iPod touch models that are running iOS 8.4 or later. It’s also available on the Mac and PC (via iTunes 12.2 or later, or through the Music app starting with macOS Catalina), Apple TV (running tvOS 9 and newer), and on Apple Watch. Android users can join in on the fun, too, if their device is running Android 4.3 (Jelly Bean) or newer.

Wait, did you say Android? Yes! Android users can sign up and have access to Apple Music’s complete catalogue, but they’ll miss out on its full array of features (like voice commands). Music for all!

Does it work with AirPlay? Yes! Each song or music video has an AirPlay button next to it—just tap it and select the device you want to beam to.

Which countries have access to Apple Music? Apple Music is available in more than 100 countries worldwide, including the U.S., Canada, the U.K., Australia, Japan, Brazil, and India. Check out Apple’s complete list for more info.

Moving to Apple Music from other streaming services

However, if you use Spotify, Google Play Music, or any other music subscription service, you’re out of luck. There is no easy way to directly import your playlists into Apple Music. There are some third-party playlist importers out there, like Stamp, but we haven’t tried any of them.

How’s the music quality? Apple Music streams songs at 256kbps, which is the same rate as iTunes Match. That’s a bit of a drop from Spotify, which uses a 320kbps bitrate. And competitor Tidal boasts more than just major celebrity endorsements: It offers a high-bitrate option (1411kbps lossless FLAC) at a pricier subscription rate, the “HiFi” tier for $19.99 a month.

Does Apple Music work with Apple’s HomePod? It sure does, but you need an Apple Music subscription to control your music via Siri.

Does Apple Music link with Sonos? Yes! If you have Sonos speakers set up in your home, getting started with Apple Music streaming is easy. Just open the Sonos app and choose “add music services.” Select Apple Music and log in.

But remember: You won’t own those files and you won’t be able to offload them anywhere else. You can’t burn them onto a disc, use them in separate video projects, or put them on other devices that aren’t linked to your Apple Music account. If you decide to cancel your Apple Music subscription, you’ll lose access to those songs.

The offline listening feature is a great option if you’re concerned about data overages, or if you know you’ll be in an area without a good wireless connection.

Beats 1, on the other hand, is more like a traditional radio station, with a 24/7 live radio stream anchored by three DJs based in New York, Los Angeles, and London. Former BBC personality Zane Lowe is leading the effort from Los Angeles, with Ebro Darden of Hot 97 in New York, and Julie Adenuga in London. Beats 1 features a combination of songs handpicked by these DJs, plus celebrity interviews, pop culture news, and other music-related content.

What’s really neat is that every user around the world hears the same content at the same time, and these stations take a much more curated approach to radio than iTunes Radio does.

Will standalone iTunes Radio remain a free service? Will iTunes Radio stations sponsored by record labels be moving to Apple Music, or will they be dropped? Beats 1 and Apple Music’s radio stations are free to anyone with an Apple ID—though the genre- and artist-based radio stations will be ad-supported and have a limit on song skips. If you created your own stations, they’ll sync over, and you can find them in the Radio tab. However, many of iTunes Radio’s former stations sponsored by record labels have disappeared, so you may be out of luck.

For more, check out our how-to on personalizing your own Apple Music radio stations.

What genres does Beats 1 focus on? Beats 1 doesn’t really focus on one specific genre like traditional AM/FM radio stations do. On any given day, you’ll hear a healthy mix of indie rock, hip-hop, pop, funk, electronic, classic rock, dance music, and more, all artfully woven together in a way that doesn’t sound like a hot mess. DJ Zane Lowe mentioned in the station’s opening remarks that Beats 1 is simply about great music, and it serves as a solid jumping off point for discovery.

The Beats 1 DJs also select one track as their daily World Record, and that song gets played hourly on the half-hour mark. Besides the daily rotation of DJs, Beats 1 includes special programming from other artists as well, like exclusive content and interviews from DJ Khaled.

How do I add songs from Beats 1 to playlists? Heard a song on Beats 1 that’s so good, you know you’ll want to listen to it again? Here’s how to track it.

Now, if you go to that playlist (Library > Playlists), you’ll see the song there.

That’s it. When you click on the playlist in the sidebar, you should see that the song has been added.

Is there a limit to the number of songs you can have in a playlist? Not that we’re aware of! Add away.

How do you tell it what songs you don’t like? When listening to a playlist or radio station, you can skip any song you don’t like (except for in Beats 1, which is live). While this should signal to Apple Music that you don’t want to hear that song or artist again, it might be finicky at times. Alternatively, tap the “heart” icon next to any song you really like.

When a song is playing, how can you go to that artist page, or album? This used to be quite complicated, but Apple has since made it much easier—just tap/click on the artist’s name.

Where do songs or artists show up when you add them to my Library? They automatically appear in the Library tab, where you can sort your collection alphabetically by artist, album, or song title. You’ll also find all of your playlists, and your list of downloaded music saved for offline listening. Scroll down to find your recently added music.

Why is there stuff on the iTunes Store that isn’t on Apple Music? It all comes down to the deals Apple has made with various artists and record labels. Some artists are not interested in streaming services.

What about podcasts? Apple makes podcast available through its Podcasts app on the iPhone, iPad, iPod touch, and Mac.

Can I use Apple Music through the web? Yes, there is a web interface. In your web browser, go to music.apple.com. You can log into your account and access you playlists, songs, and more. The web interface is a lot like the Music app for the Mac, and it’s a handy way to access your music when you’re not using one of your own devices. Don’t forget to log off if you’re using computer that others can use.

How do I cancel my free trial subscription before Apple charges my credit card? We have a separate article that details how to cancel your Apple Music and other Apple subscriptions. The article has instructions for cancelling on your iPhone/iPad, Mac, and on the web.