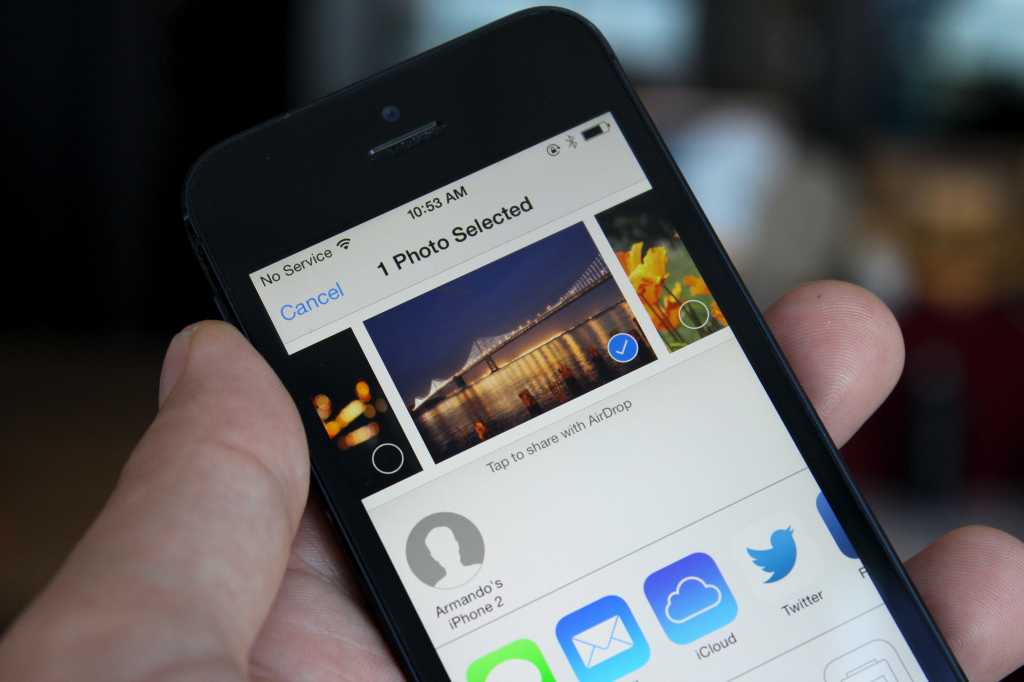 Nothing feels more futuristic and Star Trek than using AirDrop to instantly beam pictures and videos to others while you’re out and about. There’s no file size limit, no setup, no software to install, and no password to memorize. And since AirDrop uses Bluetooth, you don’t even need an Internet connection or a Wi-Fi network to make it work, though you can use a Wi-Fi network if you want. That means you can use AirDrop to fling files to and fro in places that you normally can’t—airplanes, cruise ships, and camping trips, to mention a few. In this column, you’ll learn how to use AirDrop inside Apple’s Photos app, plus get some ideas for using AirDrop in other apps.

Setting up your devices for AirDrop

To get the AirDrop party started between iOS devices running iOS 8 (or later), launch the Control Center by swiping upward from the bottom edge of the display. (In iOS 7, use the Settings app instead.)

To use AirDrop between an iOS device and a Mac, or between two Macs, make sure Bluetooth and Wi-Fi are turned on. Your Mac doesn’t need to be connected to a Wi-Fi network—Wi-Fi simply needs to be turned on.

To AirDrop pictures and videos between iOS devices, fire up Photos for iOS. Find the images in your Camera Roll or in an album, and then tap the Select button at the upper-right. Tap the thumbnails you want to send, and Photos marks them with a checkmark. To deselect an item, tap the thumbnail again.

If you want to send all (or most) of the images in a single moment, you can select them all at once and save some time. First tap the Photos button at the bottom of your screen to enter Photos view, which splits your images into “moments” based on time and location. Then tap the Select button at the upper-right corner of the screen, which makes a smaller Select button to the right of each moment’s name and location. Tap that to select every image at once, and then tap any you’d like to deselect, or tap Deselect to deselect the whole moment.

Once you’ve selected some thumbnails, tap the Share icon at the lower-left corner. You’ll see several options for sharing, with the icons of nearby AirDrop users at the top. Simply tap the person you want to send the file(s) to. On the recipient’s iOS device, a message appears asking them to decline or accept the transfer—tapping Accept adds the files to their Photos library. If, however, you send the file to another device registered with the same iCloud account, Apple assumes you own both devices and the files are transferred without the need for approval.

If the recipient is on a Mac, they need to open an AirDrop window in the Finder (choose Go > AirDrop, press Shift-Command-R, or just look for AirDrop in your Finder window’s sidebar), or else you won’t see their AirDrop icon. In the AirDrop window on the receiving Mac, a message appears that lets them decline, save, or save and open the files. The resulting files land in the Mac’s Downloads folder.

The process for using AirDrop in Photos for Mac is just as easy. Simply select some thumbnails by Shift- or Command-clicking them and then click the Share icon in Photos’ toolbar (or the Share icon that appears when you point your cursor to a moment in Photos view). In the resulting menu, click AirDrop.

A message appears in the middle of the Photos window that contains tiny thumbnails of the image(s) you selected along with the icons of nearby AirDrop-enabled devices. If you don’t see the icon of your intended recipient, try opening an AirDrop window yourself to jumpstart the process.

While there are other options for using Photos to share pictures and videos—say, shared albums and Family Sharing, AirDrop is a quick and instant way to get it done without Internet access.

Other uses for AirDrop

AirDrop is available anywhere you see a Share icon—in iOS apps, some OS X apps, and in your Mac’s Finder. You can use it to share websites in Safari, attachments in Mail (Control-click the attachment and choose Share from the shortcut menu that appears), or any file in your Mac’s Finder (open an AirDrop window and then drop the file onto your recipient’s icon). You can also AirDrop a location from the Maps app, a contact from the Contacts app, an open document in Preview or other Apple apps, and so on. Until next time, may the creative force be with you all!