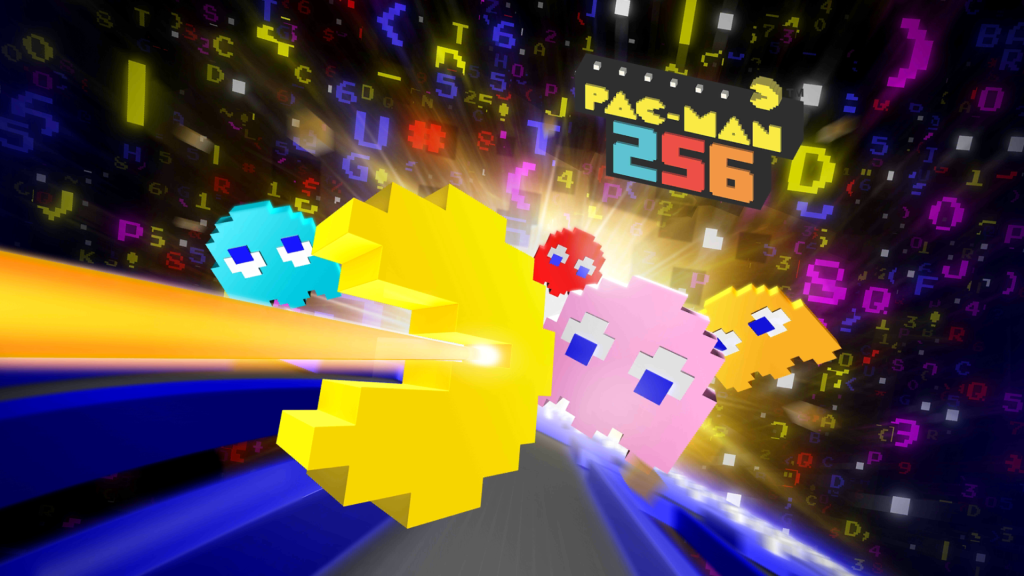 It’s been an unexpected time of resurgence for good ol’ Pac-Man on the App Store—assuming you can ignore the terrible Pixels movie game. Pac-Man Championship Edition arrived in July, and while the iOS version arrived a few years later than the original console incarnation, it put a fun, modern twist on the classic arcade design.

But Pac-Man 256 is something different: A hybrid, if you will. It takes familiar elements from the original formula—gameplay and visual alike—and merges them with an endless, score-centric design. And it’s all tied together with something of a nostalgic in-joke, not to mention the development talents behind the excellent Crossy Road. And it totally works—but the free-to-play design has an interesting approach.

Consider the above paragraph the short version; here’s the slightly longer one. Pac-Man 256 is, more or less, an endless chomper: You’ll still eat up dots on an old-school grid, swallow fruit for score bonuses, and suck down power pellets that grant the ability to eat the ghosts that chase you around the screen. Only now, the maze continues on forever as you make your way upwards.

And there’s another twist in play: The weird, garbled mash of computer code approaching from the bottom of the screen. It’s your motivation to keep pushing ahead, otherwise it will swallow you up and end your run; in fact, when you’re getting too close, the screen will get fuzzy and distorted like an old television on the fritz. That’s the “256” in the title: It’s a reference to the broken final level of the original Pac-Man arcade game, turned into a clever gameplay mechanic.

Your goal? First, stay alive by outrunning the busted code and not bumping into ghosts. Second, maximize your score by gobbling up dots, grabbing every fruit piece you can for score multipliers, and chaining together ghost kills for even more of a boost. Special power-ups play a big role, as well, as you can choose which items appear on the board—like a laser that fires from Pac’s mouth, a bomb that detonates nearby ghosts, or a magnet that draws dots and items to you.

There’s strategy found elsewhere, as well, such as learning each color ghost’s movement patterns and exploiting them, or drawing foes away from you as needed. All told, Pac-Man 256 creates a compelling endless experience that’s more methodical than a runner or most other score-chasing games—but it’s also a freemium game, and there’s money to be spent here.

Crossy Road might be the best example to date of an awesome game that isn’t damaged one bit by its freemium model: You can pay for optional costumes and that’s it—no energy meter, aggressive ads, or boosts to be found. But although the games share a developer, publisher Bandai Namco has put some limitations on Pac-Man 256 to potentially generate more revenue from the gaming legend. Even so, what’s here makes sense.

Pac-Man 256 has an arcade-like credits system, only they recharge over time—ten minutes per credit, with a maximum of six provided free at any given time. That’s six attempts to play without waiting for more credits to regenerate; or three games with one continue each (the maximum allowed). In any case, it’s probably 10 to 15 minutes’ worth of play in one shot.

If you run out of credits, you can wait for more to regenerate, or you may be given the option to watch a video ad in exchange for a couple of lives. Otherwise, spending $1 will grant you 12 credits worth on the spot—not a bad deal if we’re talking about an arcade-style game. But if you see yourself playing Pac-Man 256 extensively in the coming weeks and particularly months, just drop the $8 for unlimited credits.

Eight bucks is more than most mobile games ask for upfront, but it might be cheaper than topping off your balance a few times a week. After paying for a couple of refills, that’s what I did: I popped in my $8 and didn’t worry about it ever again.

There’s one other in-app purchase option: A coin doubler for $5, which not only gives you two coins for each standard one you grab, but also occasionally drops in higher-value coins on the maze. What good are coins? Well, they help you level up your power-ups, which have huge value for boosting your score—especially that magnet—and extending runs. It’s preferable to Bandai Namco selling bundles of coins, since you still have to “earn” coins through gameplay, although five bucks for faster accumulation seems a lot less crucial than the unlimited credits purchase.

While perhaps not as intensely addictive as Crossy Road, Pac-Man 256 does a great job of taking the classic franchise into fresh terrain, delivering an endless high-score experience that requires skill and strategy.

Surely, there’s benefit to investing some cash: The coin doubler makes it easier to amass power-up enhancements in a hurry, which can only help boost your score. And even the unlimited credits purchase means you’ll have more opportunity to hone your skills and dominate your friends’ scores. For any game with online leaderboards, purchasable perks are unwelcome additions. But compared to other free-to-play games, Pac-Man 256’s one-and-done purchases feel less grimy than buying stacks of coins or one-time-use power-ups, and the fun remains intact whether you pull out your wallet or simply enjoy the game as-is.