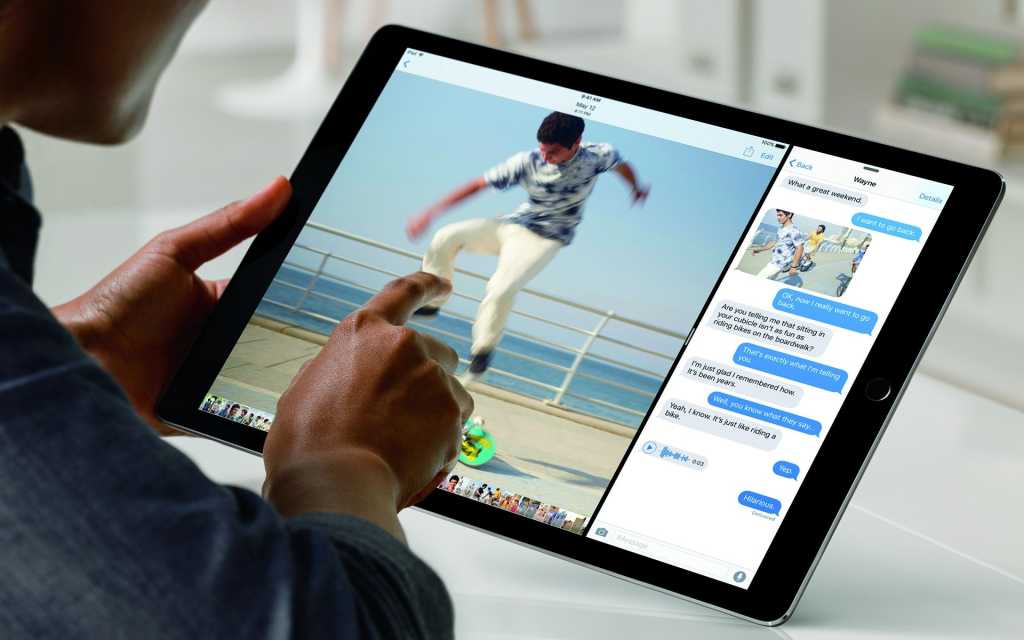 My friend and fellow Macworld contributor, Glenn Fleishman, recently wrote a column in which he argues that the iPad Pro is really Apple’s “pilot fish” for a future ARM-based MacBook. Glenn’s argument is convincing, but as I was reading his piece, I started thinking about the iPad and MacBook in terms of accessibility. Specifically, why I choose a tablet over a laptop for productivity, and where the iPad Pro fits into the equation.

Why the iPad works for doing work

I do 100 percent of my computing nowadays on iOS. Most of that time is spent on my iPhone, but a significant portion is done on my iPad Air. That I work so much on iOS is very much intentional, and stands as a testament to its capabilities.

While I do own a Mac, it’s ancient, and I’m admittedly not as intimately familiar with OS X like I am with iOS. Plus, iOS just suits my needs better. I appreciate the iPad’s one-app-at-a-time approach, which I think boosts my productivity. A single window has less happening on the screen and leaves less room for distraction. From an accessibility perspective, working from an iPad allows my eyes to focus on one thing, which most of the time is my text editor of choice.

The Multi-Touch input of iOS is easier for me to manipulate, too. I find tapping and swiping to be much easier than using a traditional keyboard and mouse. Gesturing is to me more accessible than struggling with finding and moving a cursor. Add to that my familiarity with iOS’s Accessibility features, and the iPad is a clear winner on the software side.

But the iPad’s hardware is accessible too. I find that working on Apple’s tablet to be great because I can easily move it to suit my needs. I can rotate from portrait to landscape when appropriate, but most importantly, I can hold my iPad as close (or as far) to my face as I need it. For me, this is the key advantage working on an iPad has over working from, say, a Retina MacBook. To paraphrase Jony Ive, the device fits me; I don’t have to fit the device.

Why not a laptop?

I’ll admit I’ve lusted after the Retina MacBook since it came out earlier this year. It’s a beautiful machine. It’s thin, light, has a gorgeous display—and it’s roughly the size of my iPad. Put another way, the Retina MacBook is effectively an iPad bolted onto a keyboard.

Therein lies the rub. For as much as I adore the MacBook, the problem is that it’s still a laptop. In my experiences with laptops, I’ve found that their form factor works against me, accessibility-wise. As someone with low vision, I often need to get super close to the screen in order to see it. The issue, though, is that I find a laptop’s screen to be too “far away” to see comfortably. I have to lean in to see, almost to the point where my nose is touching the glass. Adjusting the screen’s position does help a bit, but it’s still too far away to be comfortable. There are things I could do on the software side to compensate for this, but it doesn’t negate the fact that the device’s form is less than ideal. To again paraphrase Jony Ive, with a laptop, I feel like I have to fit the device.

Does this mean I’m anti-MacBook or I can’t use a laptop? No, of course not. It simply means that, for me, I find the iPad’s mix of hardware and software strikes a perfect balance for my computing needs. A “home base” Mac such as a Retina iMac would be nice, but only because an iMac is decidedly not a laptop.

Despite not having seen it yet in person, I find the iPad Pro compelling for two reasons: It runs iOS, and the screen is really big. In essence, the Pro is a super-sized version of what I’m used to with my current iPad. I can still hold it close and it runs an operating system that I interact with by touch. The multitasking features in iOS 9, which Apple said were built for this device, should even help me be more productive.

Then there’s the cost factor. The Retina MacBook starts at $1299, whereas a fully-loaded iPad Pro (with 128GB storage and cellular connectivity) is $1079. Throw in the $169 Smart Keyboard, and you’re at $1248. That’s MacBook territory. My point is, given the accessibility gains that an iPad affords me, it actually makes more sense to go iPad Pro over the MacBook. The latter may be able to do more in raw terms, but for my needs, both physically and technologically, the iPad is a far more powerful computer. Granted, $1200 is a lot to spend on an iPad, but in my case, it’s a more practical choice.

Of all the products Apple announced recently, the iPad Pro is the one I’m most excited about. I’m sure that I’ll forever gaze admiringly at the MacBooks in the Apple Store, but I’ll still remain loyal to my iPad. It’s just better than a laptop for me, and the iPad Pro should be even better.