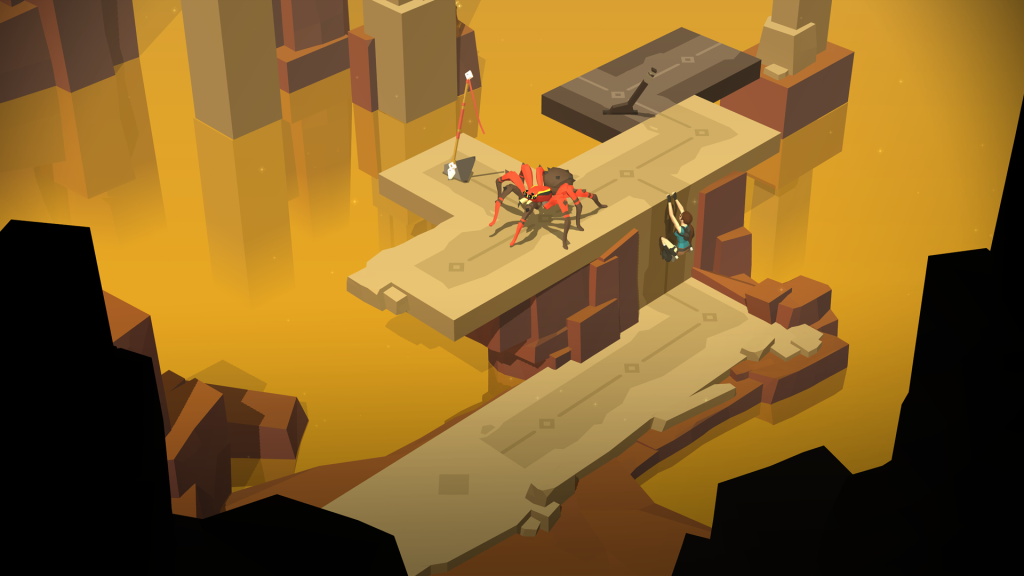 You can play the first couple of Tomb Raider games on the iPhone and iPad for a buck or two a pop, but aside from the nostalgic reminder, you shouldn’t bother—neither holds up all that well after nearly two decades of dramatic genre advancement. And aging aside, the games weren’t meant to be played on touch devices, and don’t control very well. You’ll turn the graceful maneuvers of legendary adventurer Lara Croft into the stumbles of a buffoon with minimal effort.

Luckily, the spirit of her death-defying quests lives on in a new, mobile-friendly form thanks to Lara Croft GO. Like last year’s solid Hitman GO—which adapted the console series about intricate assassinations—Croft’s game transforms an elaborate, controller-based experience into a turn-based affair with simple rules.

Square Enix works that magic again with Lara Croft GO, and it’s even better this time around. Rather than climb around dusty tombs and blast terrifying creatures, each level plays out like a puzzle. Can you make the right pattern of decisions to safely emerge from a complex gauntlet of challenging obstacles?

It’s much smaller in scope and slower in pace than Tomb Raider, but Lara Croft GO does a masterful job of delivering a new kind of quest that fits perfectly on mobile. And it looks really fantastic, to boot. Ready to begin your adventure? Here are three reasons why you should go, go, GO grab this portable puzzler right now.

It’s surprisingly brainy: Each stage in Lara Croft GO resembles a game board with spaces to traverse one at a time. Your goal? Get to the other end of the stage alive and intact, despite the giant spiders and lizards, wide gaps, and crumbling architecture in your way. Tomb Raider tends to find the balance between brains and brawn, but here, the former dominates every bit of the game. This is a strategic experience, and one false step can mean redoing a stage from scratch.

Recognizing patterns is key. The enemies have their routes they take, which not only dictate your ability to safely move around the stage, but might also trigger switches that affect other parts of the puzzle. Just as slow and steady wins the proverbial race, it’s the best way to go about solving the intricacies of each stage in Lara Croft GO. Even with a steady approach, the missions are often brief, lasting only a few minutes apiece—unless you’re really stuck.

Simple enough for touch: …yet rich enough to challenge and engage. In terms of interactions, you need only swipe to move to a new space and tap to pull a level or, say, throw a spear at an enemy. But the complexities come in the thinking—puzzling out the scenario ahead of you, and learning from your mistakes. There’s more to it than meets the eye.

Lara Croft GO’s biggest accomplishment may be how well it layers its mechanics to create serious head-scratchers. When first introduced, each new element seems relatively straightforward and easy to figure out. But once you’re familiar with them, the game starts stacking those components to deliver ever-more-devious mazes of madness to maneuver around. It’s a pretty compact adventure—a few hours or so, really—but Lara Croft GO seems to explore new wrinkles throughout.

And so beautiful: I loved Hitman GO’s faux-plastic aesthetic, which brought the board game comparisons to life in a very literal sense. But Lara Croft GO opts for a totally different look: Lush, cartoonish terrain, with a look that’s equal parts chunky and cel-shaded. It’s pretty mesmerizing, and the dynamic lighting only helps showcase its beauty. It reminds me of Monument Valley’s minimal look, but the inspiration doesn’t stop there.

Add in the isometric viewpoint and environmental puzzling, and Lara Croft GO can’t help but feel like it exists only in a world that already adores Monument Valley. But it’s not a copycat at all. The influence is there, but Square Enix made it theirs, and turned Lara Croft GO not only into an ideal mobile expression of the series—and arguably one of Croft’s best games to date. It’s a true App Store standout, and surely one of the games we’ll remember fondly as the year wraps up.