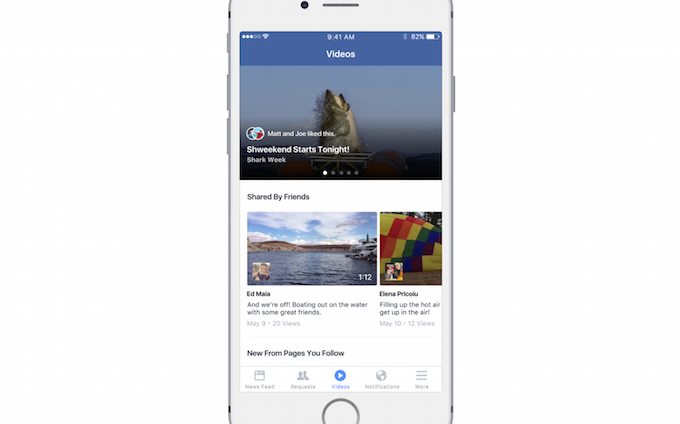 Facebook has been gunning for YouTube’s share of video views for some time now, but it didn’t seem clear how the social network would pull that off. Sure, people post videos that show up in your News Feed, but YouTube is designed to easily find the videos that people post. Facebook is not. Until now.

The network said Tuesday that it is testing a dedicated tab in the Facebook app for iOS and on the web that would feature nothing but videos. This separate video feed would be home to videos that you save to watch later with a new save button that Facebook is also testing, as well as videos from your friends, pages you follow, and clips that Facebook suggests to you.

Those suggested videos are also new. When you watch a video in your News Feed, Facebook will now surface other relevant videos to watch immediately following it.

“While we’re still in the early days of testing, we’re pleased with initial results, which show that people who have suggested videos are discovering and watching more new videos,” Facebook product chief Will Cathcart said in a Tuesday blog post. “We’ve now rolled out suggested videos to most people on iPhone globally, and are starting to test ads within the experience.”

These latest video efforts for iPhone users follow the rollout of livestreamed videos from celebrities and other VIPs on the network and 360-degree videos, a more immersive experience which will become more important when Oculus Rift ships.