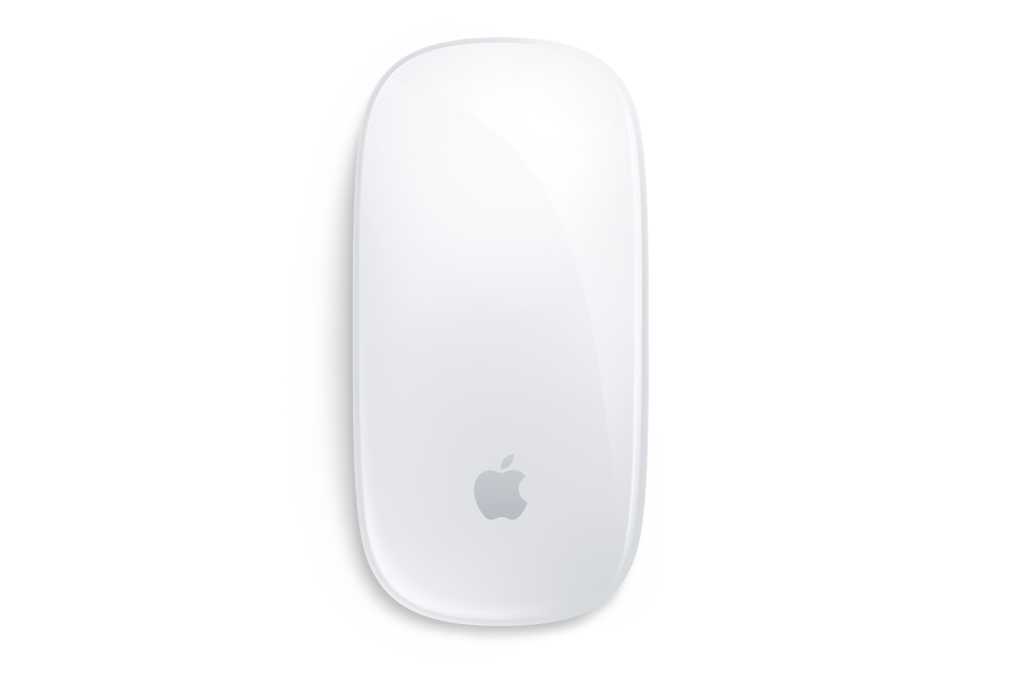 Apple
At a glance

The exterior design of the Magic Mouse 2 is almost the same as the Magic Mouse. It’s still has a white plastic sliver that rests atop an aluminum case, with no visible buttons or scroll wheel.

Flip the mouse over, and you’ll finally see a difference. The Magic Mouse 2 has a built-in rechargeable lithium-ion battery, so it no longer needs a removable battery cover. Where the latch for the cover used to be is now a Lightning port that is used to recharge the battery.

With the charging port on the bottom of the mouse, it means that you can’t use the Magic Mouse 2 while it’s plugged in—if you even did figure out a way to use it, the mouse is inactive while charging. People have been outraged by this design decision—those same outraged people also don’t have the full story about the Magic Mouse 2 or have never used it. Apple has said that the Magic Mouse 2 (along with the Magic Trackpad 2 and the Magic Keyboard) are fast-charging devices; the mouse can get nine hours’ worth of battery life in about two minutes. So, in the time it takes for you to visit the bathroom, stand up because your Apple Watch told you to, or go to the kitchen to grab a beverage, your drained Magic Mouse 2 will have a charge that will last a typical working day. Really, the charging port on the bottom of the mouse isn’t a problem—but sometimes people need any excuse to be outraged over Apple products. Apple’s press release says a fully charged battery can last “about a month or more.”

Apple changed the plastic rails on the bottom of the mouse. Combined with a lighter weight the result is a smoother, faster feel when you move the Magic Mouse 2, a vast improvement over its predecessor, which had a rough, grinding feel. (Steven Levy has an interesting story on Apple’s Input Design Lab and how the Magic Mouse 2’s rails are an example of Apple, “Sweating the details.”)

Been through this before

The Magic Mouse 2 still has only two buttons. For many users, that’s enough, but for some power users, it’s not. There’s no physical separation between the right and left buttons, but I never accidentally pressed the wrong button. When you click a button, the whole top of the mouse presses down with an audible click sound.

One pet peeve I had with the Magic Mouse—and thus, still have with the Magic Mouse 2—is that its symmetrical design makes it impossible to tell by touch if the mouse is positioned with the optics at the top. I move Macs around a lot in the Macworld offices, and if I had a dollar for every time I started using a Magic Mouse upside-down, I’d probably be able to buy a new Magic Keyboard and still have cash left over.

Magic Mouse 2 requires OS X El Capitan and Bluetooth. I tried to connect to a Yosemite Mac to see what would happen, and the Mac didn’t recognize the Magic Mouse 2 at all.

The state of the mouse

Could the Magic Mouse 2 support Force Touch? Probably not in its current state. I don’t know what it would take to implement force touch sensors underneath the top of the Magic Mouse, but I’m sure it’s not a trivial task.

Apple has a pattern of not implementing new features in older devices in order to get people to adopt the new device. The lack of Force Touch in the Magic Mouse 2 could be both a difficult thing to do and a way to get people to switch to a Magic Trackpad 2. True, Force Touch isn’t necessary for using your Mac. But Apple could, in the future,  introduce a vital interface element that requires a trackpad, forcing people to at least introduce a trackpad alongside a mouse and keyboard. (Maybe you already do this if you’re a MacBook user.)

I think we can agree that input devices might be the most personal parts of a personal computer. Therefore, opinions about input devices like mice are highly subjective, and my reasons for not liking Apple mice are a matter of taste and how they fit my personal ergonomics and the way I use a mouse. (As a matter of perspective, my favorite mouse is the Logitech Performance MX.)

That being said, I think I can be objective in evaluating the Magic Mouse 2; when I reviewed the original Magic Mouse I wrote that it “successfully combines design and usability.” That still holds true with the Magic Mouse 2: It has a stylish design (maybe dated?) that works for a lot of people. If you’re a current Magic Mouse user, is the rechargeable battery enough for you to upgrade? Yes, if you’re highly conscious about the environment. Otherwise, nothing about the $79(!) Magic Mouse 2 in terms of user input makes it a must-have.