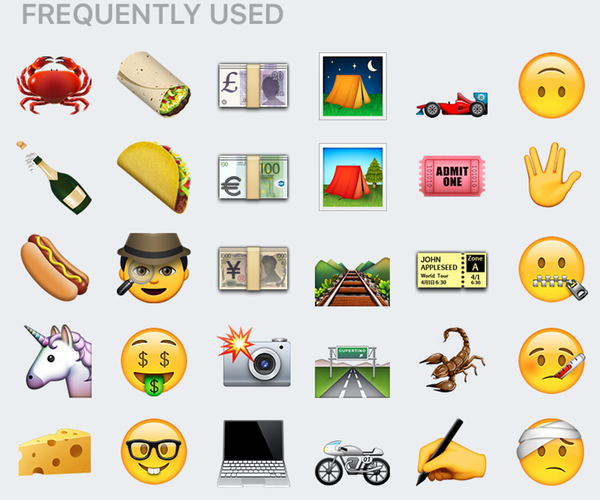 I don’t know when I first noticed emoji. I probably assumed they were just another way for software to convert text-based emoticons into actual images, a feature I first saw in iChat on the Mac. But eventually I discovered that there was an entire catalog of iconography that was being used as part of Internet communication, and not too long after that, I came to embrace it. Like ASCII smileys before them, emoji add expressiveness to text chat, and that’s a good thing.

Apple has embraced emoji, too. With the release of iOS 9.1 and OS X 10.11.1, which added 184 new emoji symbols, Apple’s devices now feature every single emoji in the Unicode standard. Not only is someone at Apple making sure that it’s on top of the emoji world, but the art direction of Apple’s emoji is superb.

It’s a little-known fact: Every operating system and website can render emoji images in entirely different ways. If you’ve ever seen an emoji on one of Google’s services and wondered why it looked really weird, that’s because Google’s emoji designs are its own, as are Microsoft’s and Twitter’s and Facebook’s. The variation can be extreme, even with relatively simple images.

Emoji are a great way to drive people into updating their devices.

I love that Apple’s gotten on the emoji train, but you’ve also got to wonder why it has suddenly snapped to attention. One popular conspiracy theory, which I actually sort of subscribe to, is that emoji are a great way to drive people into updating their devices. When iOS 9.1 came out with all those new emoji, if you didn’t update right away you saw a bunch of question marks instead of tacos, burritos, and unicorns. Getting back into the conversation was one software update away. It’s a diabolically clever plan.

While Apple is doing great at displaying emoji, it could do a much better job of letting us input them. The other morning, I was browsing through my Twitter feed on my iPad and wanted to reply to a particular tweet with a bit of an inside joke involving the German flag. (Sorry, Germans.) In my bleary post-sleep haze, I ended up sending the flag of Belgium instead. I don’t know what I was thinking—those countries are close geographically but their flags are as different as horizontal and vertical strips can make them.

But in that moment I also realized that there was no way for me to find the German flag amid Apple’s emoji keyboard. All the flags are there (in alphabetical order!), but I couldn’t search for Germany, so I’d need to orient myself by finding the flags I know and then guess about the placements of those I don’t. (In the Mac’s emoji palette, accessible in most apps by typing Command-Control-Space, there is a search field.)

The iOS emoji picker is good, and has seen great improvement over the past couple of years, but I’d love for it to be searchable. And more generally, I’d love for Apple to do a better job of enabling emoji autocomplete (at least as an option) during text entry. I use the online messaging system Slack all day long, and Slack lets you search for and enter emoji just by typing a colon followed by a term. If you know what emoji you want, you can just type “:flag-de:” and the proper emoji will appear. It’s kind of amazing, and I wish I could do it everywhere now.

On my Mac, I use Objective Development’s LaunchBar to quickly search for the right emoji via text, and it works fine. You can do much the same with TextExpander. It would be pretty great if Apple found ways to make it easier to pick emoji quickly on both iOS and OS X, though, especially now that there are 1620 emojis in the world. (At a recent conference, Jeremy Burge, proprietor of Emojipedia and member of the Unicode emoji subcommittee, told me that he expects them to add 60 or so emoji a year from here on out.)

You can be cranky and hate emoji if you like, but my online life’s better—and more expressive—now that I’m able to liberally sprinkle my messages with blue hearts (red hearts are far too forward!), prickly cactuses, and the occasional Japanese ogre. Apple’s leading the world on supporting emoji; I’d love to see it make it even easier to use them.