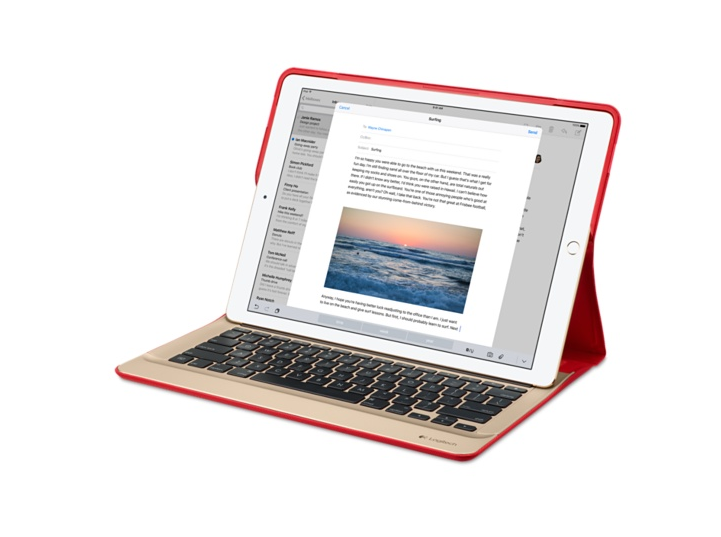 If you’re hot to get your hands on Apple’s Smart Keyboard for the new iPad Pro, be prepared to wait. As of this writing, the keyboard won’t be in stock for three or four weeks.

In the meantime, I recommend giving Logitech’s Create keyboard case the jeweler’s eye. Like Apple’s keyboard, it uses the iPad Pro’s “smart connector” for its connection and power.

1. It’s available now. You’ve waited since the iPad Pro’s announcement in September to get your hands on Apple’s gigantic tablet. And you know you’re going to want a keyboard to go with it. Do you really want to wait for the iPad-as-laptop experience?

If not, head to your nearby Apple Store. The day of the iPad Pro launch (Nov. 11), I noticed at least half a dozen new owners of the big Apple tablet buying Logitech’s keyboard. The Create keyboard is also available for shipping in 1-2 business days on Apple.com. On Logitech’s website, however, the keyboard is only available to preorder, with ship dates stretching to Nov. 29.

2. The keys are backlit. I’m a big fan of backlit keyboards. How else can you accurately type while sitting on the sofa watching The Walking Dead? Keyboards without backlighting are a deal killer for me. Apple’s Smart Keyboard lacks it; Logitech’s Create has it.

3. It comes in five colors. You’ve got a choice of red with gold keyboard panel; black with a space grey panel; classic blue with silver panel; iris (purple) with black; or black-on-black. With Apple’s Smart Keyboard, you’ve got one color: grey. (Note: Apple.com and Apple Stores currently only carry three of the five color choices.)

In my brief tests so far, I’ve found the Create keyboard to be comfortable for typing, with keys spaced nicely apart. The case’s “tightly woven premium fabric” feels nice to the touch, and I found the iPad Pro with the Create keyboard easy enough to type with on my lap—it was more stable than I thought it would be.

One wish: I’d have appreciated a fabric loop or some other way to attach Apple’s Pencil to the Logitech case.