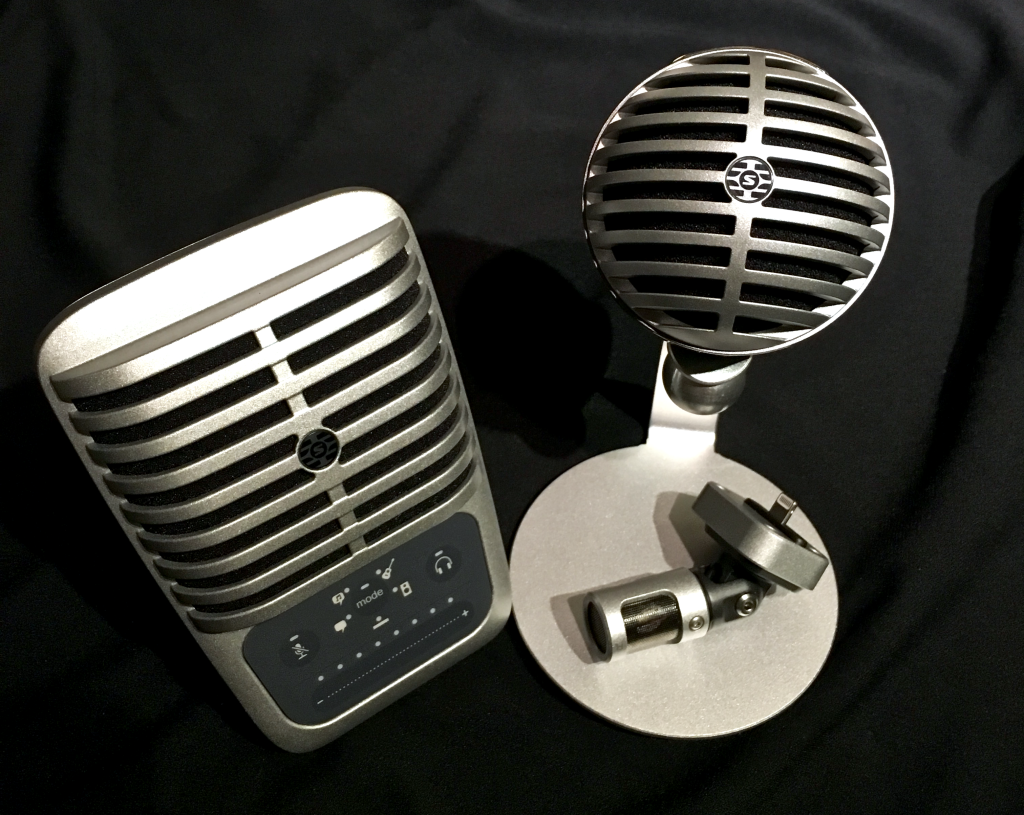 Image: Glenn Fleishman
At a Glance

Shure has been in the mic and audio business for 90 years and many of the mics you see on stage at concerts and nightclubs carry its brand name. But despite a number of companies—startups and old hands—releasing mics aimed at the amateur and professional podcaster, home musician, or field interviewer, Shure stayed out. Its Motiv line, introduced in late summer, jumps in with both feet. I had a chance to evaluate three of the mics and found they’re solid entrants when portability and versatility are figured in.

I tested the Documenter (MV88, $150), the Performer (MV51, $200), and the Communicator (MV5, $100). Each is targeted at a particular set of needs, although all are condenser mics, which capture a broad dynamic range, including subtle rapid-tempo music, but require power via USB or Lightning.

The Documenter is a stereo mic with two recording modules and a Lightning connector. It plugs right into an iOS device and can pivot up to 90 degrees perpendicular to the device. The Performer and Communicator are freestanding mics that have headphone output built in, and come with microUSB cables for both USB (Type A) and Lightning.

All three mics work with Shure’s free iOS Motiv app, which can also record sound directly through an iOS device’s built-in mic. These are all designed to be toted around while remaining rugged enough to not get banged up.

Testing microphones is an impossible job because the inputs, environments, and purpose vary so much. Typical male and female voices may benefit more or less from certain mics; loud ambient or echo-y environments are picked up differently; and a certain kind of warmth or crispness might more or less desired. There’s also the difference between spoken word, singing, acoustic and electric instruments, and drums. And my ears aren’t yours: a combination of subjective preferences and objective realities affect perception, like frequency loss in hearing in aging ears (or young ones who failed to protect themselves).

Some podcasters, musicians, and audio engineers reject the use of USB mics at all, because they don’t find the analog-to-digital converters (digital signal processors or DSPs) to be high-quality enough in inexpensive devices. Rather, they look to more traditional mics with 1/4-inch XLR connectors which are passed through a USB-connected preamplifier/mixing board. These can run a few hundred dollars plus the cost of the mics and cables. There’s a case to be made for that level of quality, but many USB mics are good enough for most purposes, especially spoken word, interviews, and conversations.

For the purposes of this review, I tested the hardware for how well it managed recording my voice as an experienced podcaster compared to a reference mic (a Røde USB Podcaster) that I use a few times a week for podcasts and remote radio interviews, and that radio-station engineers have said sounds nearly studio quality for their purposes. I also tested all three for acoustic live music provided by a budding, in-home tenor sax player. (I use the Røde with a shockmount for vibration isolation, a pop filter, and a swivel mount boom arm; all together it currently runs about $400. It’s not really suited for portable use.)

Each of the mics has a variety of presets and options. For testing voice and acoustic instrument recording, I used the specified preset for those types, which includes compression and equalization, but produces a usable output without further editing. You can also record “flat,” which omits that; or, when using the iOS app, modify and control compression levels and a multi-band graphical equalizer, or disable them.

I’d also refer you to more extensive mic reviews that were completed before the Shures were broadly available for sound samples with which you can compare them. Marco Arment looked at dozens of mics a few months ago and updated it since. The Wirecutter similarly finished its testing before the Shures were out, and they have a comprehensive guide.

You can listen to samples I made recording the same text or music simultaneously at the recommended distances for each mic for the kind of audio. I recorded with all three Shure mics for the tenor sax playing (using stereo with the Documenter), and with the Shure plus the Røde for spoken word (all mono). The samples were adjusted for volume, but not otherwise, and were recorded in my typical podcasting space, which has some minor background noise. I used a relatively affordable dampener, an egg-carton foam sheet that mounts on a tripod, to suppress echo. (When podcasting, I or an audio engineer applies a minor noise filter and offer puts compression on top as well.)

The three units are all handsomely designed and built well, something that should be expected from Shure. The Performer tries to reach the most diverse audience, and looks like an old-fashioned “crooner” mic—a bit Art Deco, but also practical. The Performer also has a kickstand with a cap that can be unscrewed, revealing a standard microphone stand connector. It’s got a solid weight to it and feel good in the hand. It folds compactly, and its design should resist any damage, though it doesn’t come with a case.

The Performer has touch-sensitive buttons on the front for adjusting input mode, which changes the DSP’s processing behavior, as well as for muting input, enabling or silencing headphones, and changing headphone levels. The input modes are for flat (unadjusted), speech, singing, acoustic instrument, and “loud,” intended for live, amplified recording. It’s a “large-diaphragm” mic, a category designed to work well in a variety of circumstances, including booming bass and drum kits.

I thought its speech setting muddied the brightness of speech too much, although even in its flat settings, its response is only slightly better. When recording acoustic music, it sounds accurate to the live performance and is relatively close to its two siblings. The touch controls on its front are easy to tap by accident, though they’re so visible that it’s easy to check you’re on target.

The Communicator comes with a tiny stand but also works with any standard tripod mount. It’s a small ball that’s super portable, but packs in a headphone jack and volume dial, a mode switch button (flat, voice, and acoustic), and a mute. Though you can use it without its stand, it doesn’t come with a carrying case, which seems like an omission. It has a plastic case, which keeps its weight down, but its design should protect its sensitive parts well.

The speech setting on the Communicator was closer to what I’d prefer, although still not as bright as the Røde. However, because it reduces the stress on some of the high frequencies, it effectively “de-esses” a recording compared to the raw, referenced Røde. With the tenor sax, it produces clear sounds, though a little far-off even though it was at the recommended distance.

The iOS-only Documenter is even smaller, but it’s sort of ridiculous what Shure has managed to squeeze into it. It has two separate mic capsules, and settings that allow the same DSP choices as the Performer. One capsule captures sound in a bubble in front of the mic (looking at its top), called a cardioid pattern; the other captures stereo from left and right sides. A selector in the app allows choosing which pattern to use, including capturing raw sound from both which has to be handled in more advanced editing software, and adjusting the field of stereo capture.

The Documenter has a 90-degree pivot joint which only rotates in one direction. If plugged in with one orientation into the Lightning port, the headphone jack remains accessible, and an including narrow-headed male-to-female 1/8-inch adapter lets you access that port of your normal headphones’ plug is too big. However, in that orientation, you can only tilt the mic away from the touchscreen side, which makes sense for recording video—the left/right stereo works beautifully for someone recording and their subject or subjects. A windscreen cover (and a setting in the app) are also included, as well as a nifty, crush-resistent zippered case.

The Documenter was the best of the three, demonstrating its versatility. Set to speech, its default options were close to ideal, though it picked up a background hum more strongly than the Røde, which is quite good at isolating nearby sounds.

It’s absolutely critical you follow Shure’s advice when using a Lightning connection or the Documenter with a cellular iOS device: Set it into Airplane Mode, or you’ll pick up loud interference. The firm also recommends Do Not Disturb mode so you don’t capture bings, vibrations, and incoming ringer sounds.

The app is so crisply minimal and beautifully designed that I find myself tapping around in almost for fun, rather than function. It’s got the desired feel, like Danish hi-fi equipment. You can record via any OS X app with the Performer or Communicator, or with the Motiv app in iOS, which is the only method to capture sound for the Documenter. All the DSP settings, like speech and flat, can be set from the app, as well as compression, equalization, and the Documenter’s various capsule options.

The hamburger button does perhaps too many duties: it’s where you switch to record mode, view previous recordings, access a mic’s settings, and set additional options hidden in Info, which isn’t logical. For instance, the passthrough control for letting you listen via headphones while a mic is plugged in appears in Info as Input Monitor. Technically, it’s not a mic settings, but that’s still a strange place for it to show up.

When you’re in recording mode, tapping stop doesn’t finish a recording, but rather pauses it. Only tapping Done and then entering a text label, ends the session. Once recorded, items can be shared through AirDrop and any other Share options.

Each Shure has its strengths and, paired with the app, each lets you have a very nice portable solution. I feel like the Communicator should have delivered more, but given its design, it may simply be better geared towards live performance and instruments than the spoken word. Recordings on a Performer, with just a little adjustment or none at all, could go straight in a podcast. The Documenter has a lot to offer as a super-compact mic with many options. I like its sound, but I also like the many uses to which it can be put.

Mics that receive comparable praise can range from $40 to several hundred dollars, though nearly all (like the Røde I have) are designed for fixed operation. Arment’s top pic is the Shure Beta 87A, currently $250, but which requires an XLR interface (about $100); but his No. 4 pic, the Audio-Technica ATR-2100-USB, is just $40. The Wirecutter recommends the Yeti by Blue, a mic that’s a podcaster favorite, as it comes with an integral stand and several mic settings (about $110), while its portable choice is the Samson Meteor ($60).

If you’re looking for something portable, all of these Motiv mics deserve a close comparison. Because there’s no right way to sound–except free of static, hum, artifacts, muddy, or peaked-out—I also highly recommend that you purchase mics from a source that allows free or low-cost returns.

There are enough quality USB mic choices now that you shouldn’t have to settle, and Shure’s entrants fit inside the universe of options to consider.