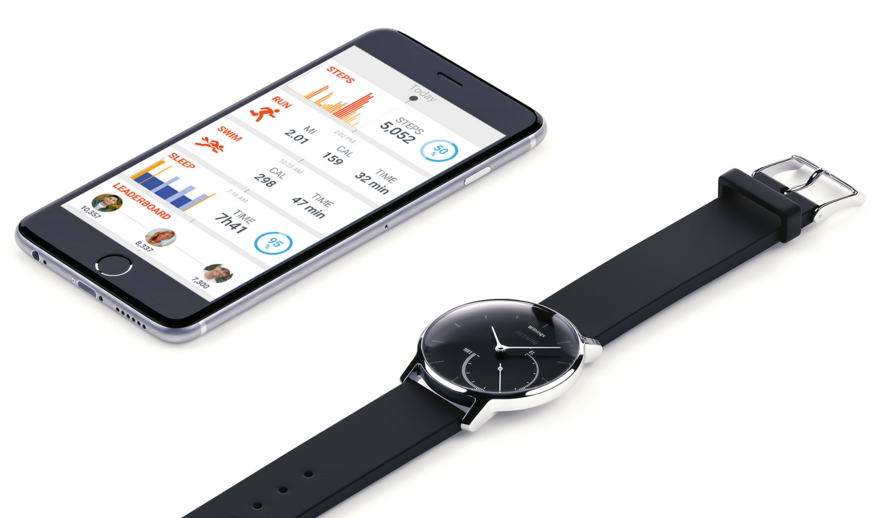 The Withings Activité Steel is a sleek fitness tracker masquerading as an analog watch, but could use more band options.

Some fitness bands look like chunky rubber bracelets with tiny screens that flash numbers at you. They’re purely utilitarian. On the other end of the spectrum, there are activity trackers masked as pieces of jewelry. They don’t track much beyond your daily step count, but they’re far more fashion-forward than a Fitbit. Then you have watches that are secretly fitness bands, like Withings’s line of Activité activity trackers, which look like analog timepieces but feed a lot of data to the company’s corresponding smartphone app.

The latest Withings watch, the $170 Activité Steel, isn’t a huge departure from its predecessors, the $450 Activité and the $150 Activité Pop. It’s not nearly as luxe as the Activité, which also has a stainless steel case, but comes with a leather band and sapphire glass protecting the face. But the Steel trades the Pop’s PVD-coated case and mod color schemes (the watch comes in blue, black, beige, and coral) for a steel, a black watch face, chrome hands, and black silicone strap. Withings calls it “masculine,” if you consider black and steel to be a “masculine” combo (which I don’t). My boss, Jon Phillips, tried the Activité Steel and found it too small. At 36.3mm in diameter, it’s smaller than the smallest Apple Watch, which is why it didn’t seem oversized to me.

I haven’t used the Activité, but I tried the Pop and didn’t love it. For a $150 smartwatch, it felt a little cheap, and the silicone strap on the coral version made my skin itch, especially while running. I spent more time with the Activité Steel to see if the $20 price jump makes a big difference—and it does.

Tracking your moves behind the scenes

You can’t tell by looking at it, but this watch is tracking every move you make. It knows when you’re walking, running, or swimming, and how many miles you rack up. But when you look at its face, all you can see is chrome hands ticking minutes away. There’s a small sub-dial on the face that shows the percentage of progress you’ve made toward your daily step goal, but it doesn’t overtake the watch’s main purpose, which is to tell time.

All of Withings’ Activité smartwatches are designed to be watches first, fitness trackers second. That’s why, aside from the step goal percentage, all of your data is stored in the Withings Health Mate app instead of available at a glance on your wrist. You even use the Health Mate app to set up the watch, including setting the time and picking your daily step count goal. If you want your information immediately viewable, then the Apple Watch, iOS-compatible Android Wear watches, or a run-of-the-mill fitness band is your best bet.

The Activité Steel is also not a running watch, and the Health Mate app isn’t a replacement for running apps like Runtastic, Runkeeper, or Strava. The watch has no sensors, so it can’t measure your heart rate, and it can’t break down your pace per mile. It can, however, track your overall run time and mileage, as well as count steps, track dives up to 50 meters deep, and monitor your sleep. You can’t take the Apple Watch swimming, and it usually needs to be charged overnight, anyway. (The Activité Steel lasts up to eight months on the standard watch battery it comes with.)

I took the watch for a few 3-mile runs to test its comfort and accuracy. I’m accustomed to using an Apple Watch as a fitness tracker, but the two can’t be compared—they’re aiming for entirely different markets. I do wish Withings would adopt a more comfortable material for its band, something akin to the Apple Watch Sport’s fluoroelastomer material, though the silicone strap that came with my Activité Steel wasn’t as stiff as the Pop’s band and didn’t itch at all. The Steel’s price point obviously wouldn’t lend itself to a high-quality band, but Withings could sell leather bands or link bracelets separately for easy swaps. Currently, the company only sells silicone bands separately.

I even wore the Steel to bed to really put its comfort to the test. I prefer to sleep without jewelry on, out of fear that I’ll scratch my face or get something tangled in my hair, so I was hesitant to crawl into bed with the Activité Steel still tightly strapped to my wrist. But I did, every night last week, and found the watch’s vibrating alarm a nice wake-up call. I usually rise to the sweet sounds of an NYC-area DJ shouting about the morning’s news, which tends to give me the jolt I need to get out of bed, but the subtle vibration of the watch at 6:30 a.m. was a much less jarring way to wake up. (I had the shouty DJ prepped to go off as a backup plan, though.)

The watch sends your sleep data to the Withings Health Mate app on your smartphone and charts it for you, so you can see how long it took you to fall asleep, how many times you woke during the night, and your periods of light sleep compared to deep sleep. (As you can see, I am a champion sleeper. It’s my greatest skill.) Insomniacs might appreciate this data more, though it was still reassuring to see that I do, in fact, get enough rest.

The Activité Steel is a solid, stylish smartwatch that is less expensive than other, less fashionable fitness trackers.

It also ties in to the Withings ecosystem, which includes a Wi-Fi scale, blood pressure monitor, a sleep system called Aura, and a more rudimentary fitness tracker called Pulse. You can connect all of the devices to your Health Mate app to pool the data in a central spot.

Withings also partnered up with MyFitnessPal so you can count calories, too, though I wish that food-logging functionality were more deeply embedded in the Health Mate app. Instead, when you tap to add your meals for the day, Health Mate just sends you over to MyFitnessPal. But your calorie logs from MyFitnessPal do appear in your Health Mate daily timeline, and your calorie budgets change depending on your activity as tracked by your watch.