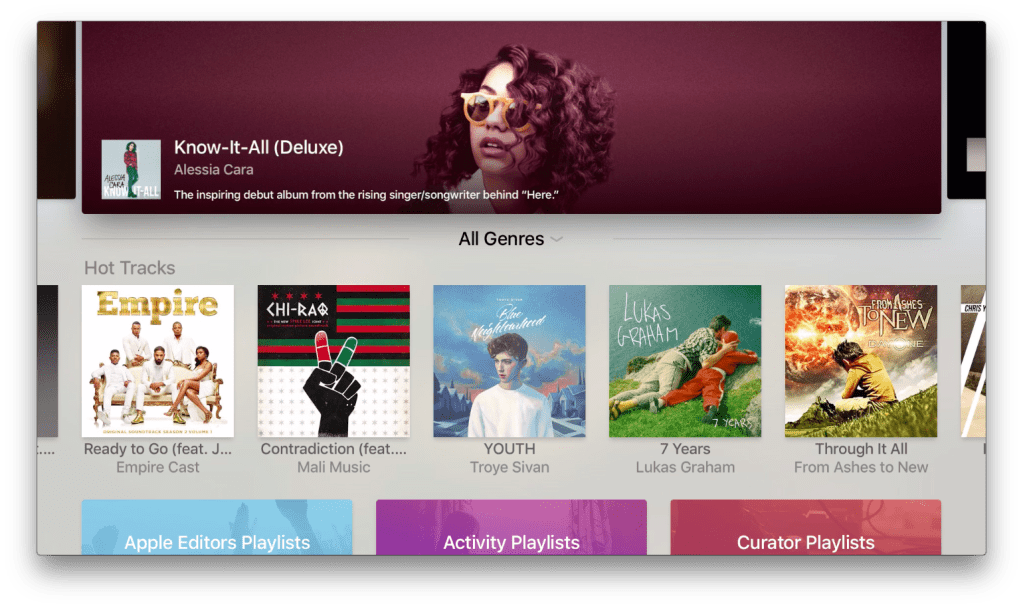 When Apple Music launched in June, Apple TV owners noticed there was no app for it on their set-top boxes. That changed in October with the release of the fourth-generation Apple TV, which shipped with Apple Music preinstalled and ready to turn your TV into a makeshift stereo system.

If you’re anything like me, you rely on a Bluetooth speaker to fill the living room with music. The addition of Apple Music to the Apple TV is a welcome one, because your TV’s volume beats an inexpensive speaker’s any day. The app functions basically the same on the TV as it does on the phone, so finding new albums, searching for curated playlists, and playing a radio station are all familiar exercises for Apple Music subscribers. But like the iOS version, Apple Music’s tvOS app has some quirks that make little things like creating playlists and adding music to your queue a little more cumbersome than they need to be. At least on iOS, you get a helping hand from Siri. With Apple TV, you’re on your own—for now.

Apple Music for iOS and tvOS have the same basic features, but using the new Siri remote (minus the Siri part to start) to navigate the app on your TV is slightly different.

On the Now Playing screen alone, which is where you are when a song begins to play, there are several touchpad gestures that give you more options than just listening to the song. You can lightly rest your finger on the touchpad to see how much time is left on the song, and if you press to the left or right of the touchpad while a song is playing, you’ll either return to the beginning or skip to the next song. If you press down and hold the left or right of the touchpad, you’ll reverse or fast forward to a specific point in the song. To see what’s up next, press the touchpad and you’ll see the array of songs queued up. Highlight the More icon at the top (denoted with the three dots) to access even more options, like starting a radio station, adding a song to a playlist, going to the album, or changing your speakers from Apple TV to a third-party audio set-up.

Adding songs to Up Next

Queuing up songs on Apple TV is a little different from your iPhone or Mac because song titles in the Apple Music TV app don’t have have a More icon, the three dots, next to them. This means when you find a song you want to queue up, you have to press and hold the remote’s touchpad for a menu of options to pop up. From here, you can do everything from play next and add to Up Next to start a radio station or add to a playlist.

The only trick here is that you can’t press and hold the touchpad to queue up a song from its cover image on the New screen. I tried that with some of the Hot Tracks, but pressing to add them to a queue does nothing, and a quick tap just plays them immediately.

Creating a new playlist on your TV is about as easy as making one on your phone or Mac, though more time-consuming because of how big of a headache it is to search for songs—Siri support really can’t come soon enough.

If you want to add songs to an existing playlist, there are two methods: Start playing a song, then add it a playlist from the Now Playing screen by clicking again on the touchpad and highlighting the “More” menu at the top and selecting “Add to a playlist.” Or you can highlight a song title, then press and hold the touchpad on your remote to pull up a menu of options and pick “Add to a playlist.” Sometimes that doesn’t work, like when you’re trying to add a song from one playlist to another, so you’ll have to add that song from the Now Playing screen. (Yes, this process should be much easier.) If you’re making a new soundtrack from scratch, follow the same steps you would to add to a playlist, then highlight “New playlist” under “Add to a playlist.” Think of a title and tap “Create playlist.”

You can’t add a cover photo to your playlist from the TV app, but you can always go back in and add one later on your phone.

Is that all there is?

Apple Music on Apple TV is a more basic version of the iOS app, but three additional features would make this my most-used TV app (aside from Netflix, let’s be honest).

Siri integration: Siri is one of Apple Music’s biggest selling points, because no other streaming music app is supported by Apple’s voice assistant. And despite the fact that Siri can help you find content in third-party tvOS apps like HBO Go and Netflix, Apple hasn’t yet turned on that feature for Apple Music. Siri is coming soon—sometime toward the beginning of the year, Apple CEO Tim Cook has confirmed. But until then, I have to hunt and peck letters using the Apple TV remote to search for the music I want to listen to, which is a terrible experience.

Handoff: The fourth-generation Apple TV doesn’t support a Remote app on iOS, which means you can’t search for content on your phone and then queue it up on the TV. Apple Music does have a corresponding iOS app, but you still can’t add songs to your queue or use Handoff to start a jam you want the whole room to hear. The songs I add to my Up Next queue on my phone don’t show up on the TV app, and vice versa. Some continuity here would be a welcome addition.

Social: You’ll notice Apple Music’s tvOS app is missing the iOS app’s Connect feature, where you can follow artists and see exclusive content they post, though you can still find “Discovered on Connect” songs and video picks in the New tab. Because the Apple TV is inherently more of a group experience than your iPhone—it’s the centerpiece of your living room—Apple Music’s tvOS app is in desperate need of social features like a party queue or collaborative playlists for sharing music. Everyone picks a username upon signing up for Apple Music, so following friends should be as easy as following artists in Connect.

How would you improve Apple Music on the Apple TV, or in general? Share your suggestions in the comments.