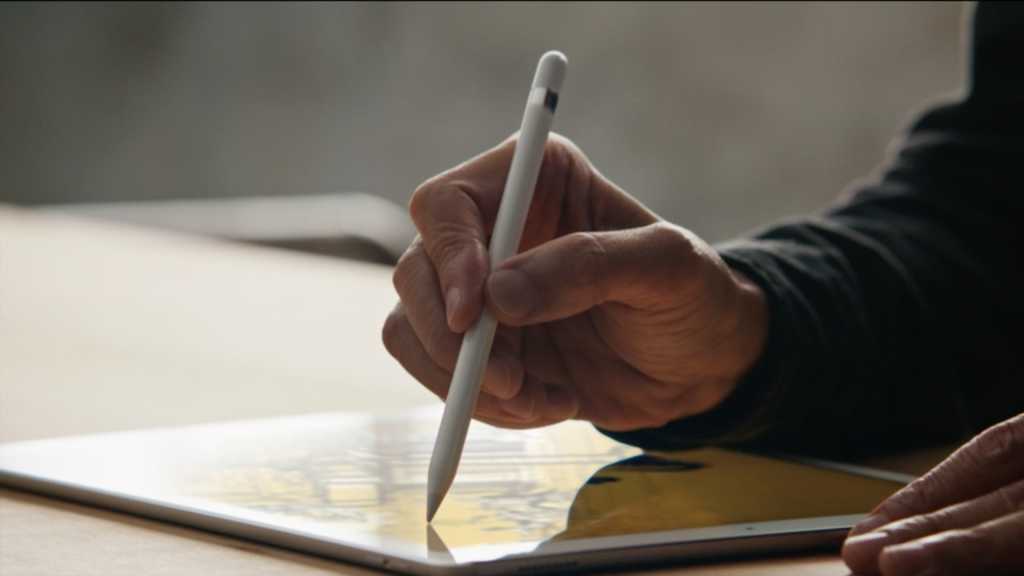 An all-around pleasure to use, the Apple Pencil shows what a Bluetooth stylus should be.

Apple’s pressure-sensitive Pencil is a home run, exhibiting remarkable performance on the new iPad Pro, but that should not come as a shock: The two were engineered from the ground up to work together and only with each other.

The iPad screen recognizes when you are using the Pencil, and in response, dynamically boosts its scan rate to 240 times per second (twice the speed it scans for your finger) to minimize latency, the time between the Pencil’s point touching the glass and a mark appearing on the canvas. Simultaneously, the Pencil’s sensors work with the display to detect its position, force, and tilt via APIs in iOS 9.1 that not only register current location but predict future movement.

Press lightly to get a thin stroke, press harder to get a thicker stroke, and rub lightly with the side of the Pencil’s tip to get shading action, just like using a regular pencil, though the quality of that shading depends on the app and the brush you choose.

Straight out of the box, Apple’s Pencil is a joy to use. You don’t need to do any elaborate pairing or visit the Settings app—just plug the Pencil in to the iPad Pro’s Lightning port to pair it, then go to town. It works as a stylus with any app, letting you launch, navigate, scroll, and complete basic operations. You can even trace over a regular sheet of paper.

But Pencil doesn’t do everything. Edge gestures to access Notifications or the Control Center don’t work, and you can’t use it to open a second app in Slide Over or resize apps in Split View. You must still use your finger for those functions, and I’m good with that because it’s not necessary, and you don’t want to accidentally invoke functions with Pencil.

I tested the Pencil with Evernote, Notability, Adobe Photoshop Mix, Fix and Sketch, Complete Anatomy, LiquidText, Pixelmator, Procreate, Paper, Notes, Apple Photos, and iMovie, along with the iPad’s built-in apps. Remarkably, each app performed as advertised, and in accordance with its own conventions, including Notes’ nifty onscreen ruler that helps you draw a straight line. The only anomaly was the reference app Complete Anatomy, aimed at medical students, which suffered from a slight lag time when I used the Pencil to annotate the text.

Cursive handwriting and printing can be a heartbreak with many styluses, and performance varies widely. However, I have yet to see a handwriting function that works quite as well as Pencil. (It reproduces my poor penmanship flawlessly.) Pencil is a totally natural notetaker and such a pleasure to use, that I’m almost tempted to lug the iPad Pro around for the sheer joy of writing with it. And just for the record, I thoroughly enjoyed sketching with it too, though I’m far from a freehand artist.

Styluses are a personal thing. What feels right to one paw doesn’t necessarily translate to another. Apple’s Pencil has just the right amount of balance and heft so that I can use it for long periods of time without feeling hand strain, just like a traditional pencil. That’s actually a bigger deal than it sounds. Only one other stylus I’ve used competes, and that’s Adobe’s Ink. Most other styluses wear out my hand in a surprisingly short period of time.

That said, I would have appreciated the instrument to have more of a matte feel, as opposed to the slick plastic surface. It was not hard to grip, nor did it slip from my fingers, but it would feel even better with an ever-so-slight degree of velvety friction on the surface.

That’s also related to the diameter. Being a pencil, it’s thin. And for drawing, that’s great. But when I’m taking notes with it, I’m reminded of how I tend to go for pens with a bit of a thicker barrel to ease the strain on my hand as the words fly from by brain to my fingertips. I’m not advocating Apple make the Pencil barrel thicker, but rather expressing that the variety of tasks the Pencil affords will offer different experiences.

The Pencil is pencil-like in length, so my small hand was just about able to handle it in a natural way. It edges toward being a bit too long, and I’m glad Apple decided not to use the end tip as an eraser, like traditional pencils, because at that length, it might feel awkward.

Most styluses are an either-or affair: You’re using your finger or you’re using the stylus. Thanks to a new touch subsystem in the tablet, the iPad Pro can recognize both inputs simultaneously and accurately differentiate between the two.

Automatic and accurate palm rejection makes the Pencil convenient because I can actually park my fist directly on the iPad’s glass while writing, drawing, or painting without having to worry about errant marks showing up on the canvas.

And that brings me to the screw-on tip. Most high-quality styluses advertise their presence with a clicky little sound that gets old really fast. When I’m stressed or frustrated with a project, the last thing I want to hear is a clickety-clack. The Pencil has a point, but its materials make a very muted sound, which is much more agreeable. Apple thoughtfully includes a replacement tip in the box, just in case.

The only problem is losing tiny things. The second tip can stay in the box until you need it, but take care not to lose the adapter that connects the Pencil to your Mac or an AC power adapter for charging, or the little cap that covers the Lightning connector, as you cannot park both on the Pencil at the same time.

To use the Pencil, which at $99 I consider reasonably priced, though on the high end of the spectrum, you also need the iPad Pro, which starts at $799 and goes over $1,000. The Pencil is totally useless on any other iOS device.

It’s a little disappointing that Apple limits the Pencil to iPad Pro users, when it could potentially engage a larger audience of late-model iPad users. Apple appears intent on creating a uniquely superior experience with the Pencil, so that a different kind of interaction, with perhaps more latency and less pressure sensitivity and tilt awareness, would defeat the purpose. Nonetheless, some people will stick with their laptops and smaller iPads and never need the iPad Pro. Depriving them of the Pencil doesn’t seem quite fair.

Both the Pencil and the iPad Pro hold up well in terms of battery life, and the when the Pencil’s charge does drain, it takes almost no time to get it up and running again. The initial charge lasts about 12 hours, but 15 seconds plugged into the Lightning connector of the iPad Pro gets you back to work for another half hour before you can even lose your train of thought.

Getting a quick battery boost directly from the host device—without having to get up out of your chair to hunt for a cord or charger—is the way we all should work. Charging the Pencil is easier and faster than sharpening a regular pencil.

Battery life, in this case, is academic, and the Pencil has no onboard battery indicator. However, you can check the battery level by enabling a Batteries widget in Notification Center; plus, an onscreen alert flashes when the battery hits 5 percent.

If you’re an iPad Pro owner, should you buy the Pencil? That’s a no-brainer—Apple hit it out of the ballpark in terms of ease of use and performance. Even those who feel they have no specific use for it right now will likely find it makes life easier in various, unexpected ways.

If you are an iPad owner that does not need an iPad Pro, it’s OK to be annoyed that you can’t use the Pencil with the rest of the iPad lineup—but that might not be the case forever. I think Apple should democratize the Pencil, upgrading the next generation of iPads to take advantage of at least some of the Pencil’s charms.