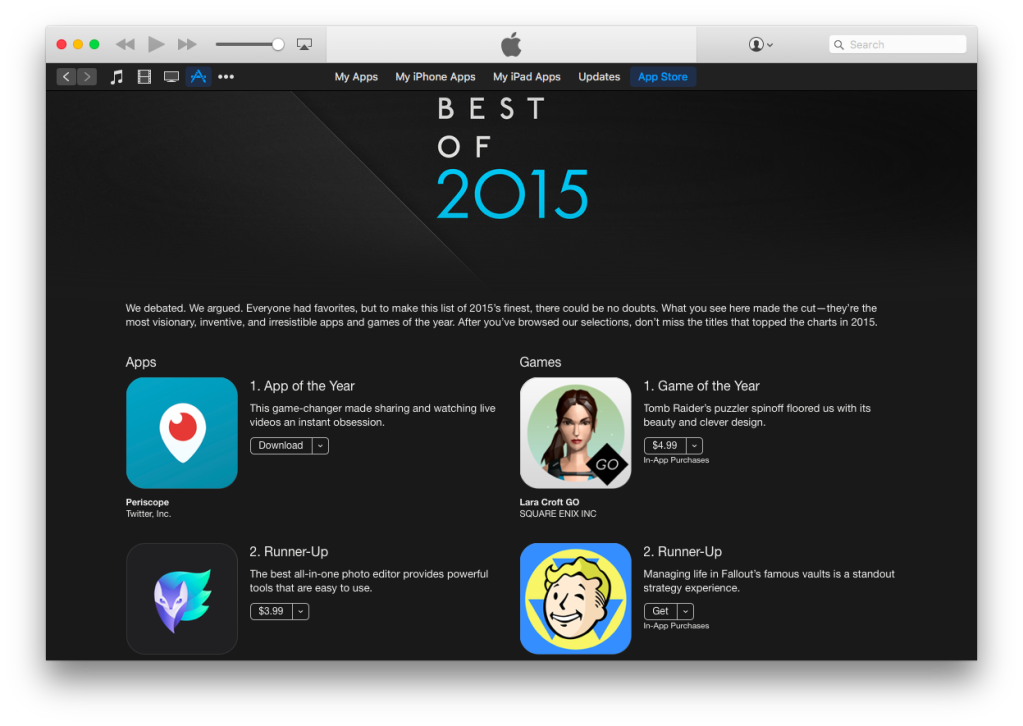 The end-of-the-year best-of lists are trickling out, ranking everything from books and movies to tweets and trends. But 2015 wouldn’t be complete without Apple’s picks for the year’s best apps, and for the first time the company also selected the top Apple Watch and Apple TV apps.

The iOS app of the year is Periscope, Twitter’s live-streaming app. It wasn’t the first of its kind (sorry, Meerkat), but it is Apple’s favorite. The year’s second-best app is powerful photo-editing tool Enlight. The company picked Lara Croft GO as its iOS game of the year, a pick we also love, and Fallout Shelter as the runner-up.

On Apple Watch, Dark Sky is the best watchOS app of 2015, while Rules! claims the top game spot. On OS X, Affinity Photo is Apple’s pick for best Mac app, and Pillars of Eternity is the best game.

Pop open iTunes to check out the full list of Apple’s top picks for 2015.

Just one month after shipping, the fourth-gen Apple TV has more than 2,000 apps in its new tvOS App Store. Not surprisingly, streaming video and gaming are dominating the platform. Apple picked HBO Now and Rayman Adventures as the best TV apps of the year ( we’re also big fans of both).

Eddy Cue, Apple’s senior vice president of software and services, told BuzzFeed that Apple didn’t design the new Apple TV to compete with traditional gaming consoles like the Xbox One and PlayStation 4, but realized the set-top box could capture casual gamers.

“What we’re seeing with the new Apple TV is to me very similar to what happened with gaming on the iPhone,” Cue said in a Wednesday interview on BuzzFeed. “When we first announced the iPhone, we didn’t tout it as a gaming device. But games became a huge part of iPhone, because it turns out that a lot more people than just hardcore gamers love games. We expanded the market. I think the vast majority of people around the world probably aren’t looking to buy an Xbox or PlayStation. But that doesn’t mean they don’t enjoy playing games. I think Apple TV expands the gaming market to those people.”

In a Tuesday tvOS update, Apple turned on support for the fourth-gen Apple TV in the iOS Remote app, which makes the TV much easier to control. Cue told BuzzFeed that Apple is building a brand-new Apple TV remote app for iOS that will turn your iPhone into a Siri remote, like the one that comes with the new Apple TV. The timeline for that app is the first half of 2016 (yeah, that’s pretty vague), but at least we have something to look forward to now that Apple’s live-streaming TV service plans have reportedly been put on the back burner.