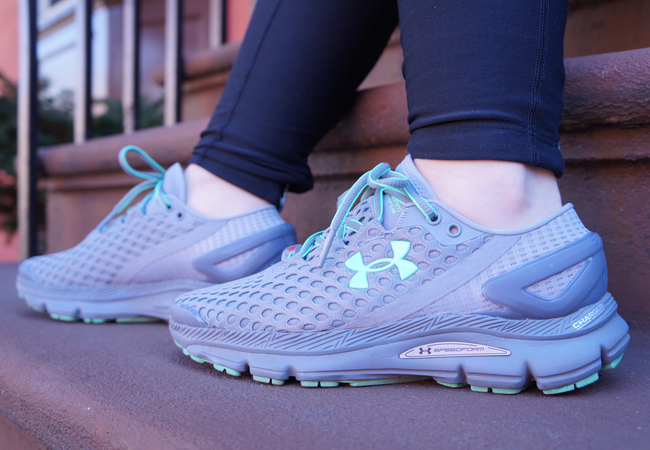 Lee Hernandez
At a Glance

Under Armour put Bluetooth and a motion sensor in its SpeedForm Gemini 2 sneakers.

After I tested sensor-filled socks that promised to make me a better runner, I thought I had seen it all. (Then I tried out a Bluetooth sports bra, which was also pretty wacky.) But now Under Armour wants to make fitness technology not just wearable but unnoticeable, starting with a product that I don’t even think about when I start running: my shoes.

Under Armour announced its Record-equipped SpeedForm Gemini 2 sneakers at CES, and they finally go on sale February 29. These smart shoes integrate Under Armour’s clothing with its fitness apps, which include MapMyRun, MyFitnessPal, and UA Record. The Record-equipped Geminis don’t look a whole lot different from their dumb predecessors, but these sneakers are downright intelligent.

OK, technically, only one of the shoes is smart. The right sneaker has Bluetooth, an accelerometer, and a battery built right into the sole. You can’t remove the components, but Under Armour told me they’re designed to outlast the life of the shoe. I’ve been running with the RE-equipped SpeedForm Geminis for the last month to see how they stack up to more traditional, wrist-worn fitness trackers.

First thing’s first: If a Bluetooth running shoe isn’t comfortable, there’s no point in buying it, no matter how smart it is. But Under Armour makes some of the best fitness gear around, and the smart Geminis are no different. In my experience, they do run a half size small, but other than that, they’re actually more comfortable than my usual running shoe (currently the latest model in the Nike Pegasus lineup).

The SpeedForm Gemini RE has one huge selling point: You don’t need to wear a fitness watch or activity band to track your workouts. You don’t even need to bring a phone with you. The sneaker’s sensor sits in low-energy mode while it’s in your closet, then when it moves, the shoe waits for you to start running. Once you clear an 11-minute mile, it shifts into high gear and tracks your entire workout on its own, saving the data locally until you sync it with MapMyRun. The shoes can store up to five runs before they’re erased.

Pairing the app to the shoes is a cinch: Just make sure your Bluetooth is turned on and tap the right sneaker around a few times to make sure your phone picks up its signal.

Everything the shoe can do

You get a lot more data when you run with your phone in tow, because right now the app can only pull time, distance, and pace per mile from the shoe when it’s out of Bluetooth range. When you run with MapMyRun open, you get data from your phone’s GPS along with more real-time info from the shoe itself, like cadence. Paul Pugh, Under Armour’s vice president of connected products, told me that the shoe’s chip is actually capable of giving you way more data than it does right now, and will do so down the line. Basically, your sneakers will get smarter with software updates instead of having to buy a whole new model.

If you already use and like MapMyRun, pairing the app with these shoes gives you a new layer of insights, such as steps per minute (both average and maximum), and cadence vs. elevation, so you’ll know how fast you run on hills. I had some trouble with severe battery drain with my iPhone while testing a beta version of MapMyRun that was paired with the shoes, but I reported the bug to Under Armour and they pushed out a fix before the public version hit the App Store.

Who needs a smart sneaker?

These shoes aren’t for everyone. If you need a fitness tracker that can record a variety of workouts, including ones that aren’t so cardio-intensive, then you’re better off using a more traditional wristband with multiple workout modes.

But for runners who love to hit the pavement, trail, or treadmill unencumbered, these shoes offer a seamless way to do just that. I often test fitness gear or apps while I work out, sometimes a few at once, and it’s a relief to just hit the ground running without having to open, sync, tap, or do anything more than just run.

If you want more stats than the sneakers alone can track, bringing a phone along to use MapMyRun isn’t a big deal—plus, you’ll be able to listen to music and get voice-coaching, too.

There’s a down side: Putting an activity tracker in the shoe instead of on your wrist means you’ll have to upgrade sneakers sooner than you would buy a new fitness band. Runners usually wear their sneakers into the ground between 300 and 500 miles, so depending on how far you run and how often, you might need a new pair in less than a year. But these shoes aren’t prohibitively expensive—$150 is a little pricier than an average pair of high-quality running shoes, but not by much. The regular version of Under Armour’s SpeedForm Gemini 2s costs $130, so $20 extra isn’t a huge jump. Plus, $150 is a whole lot less than a lot of fitness watches and activity trackers on the market—at least the ones worth using.