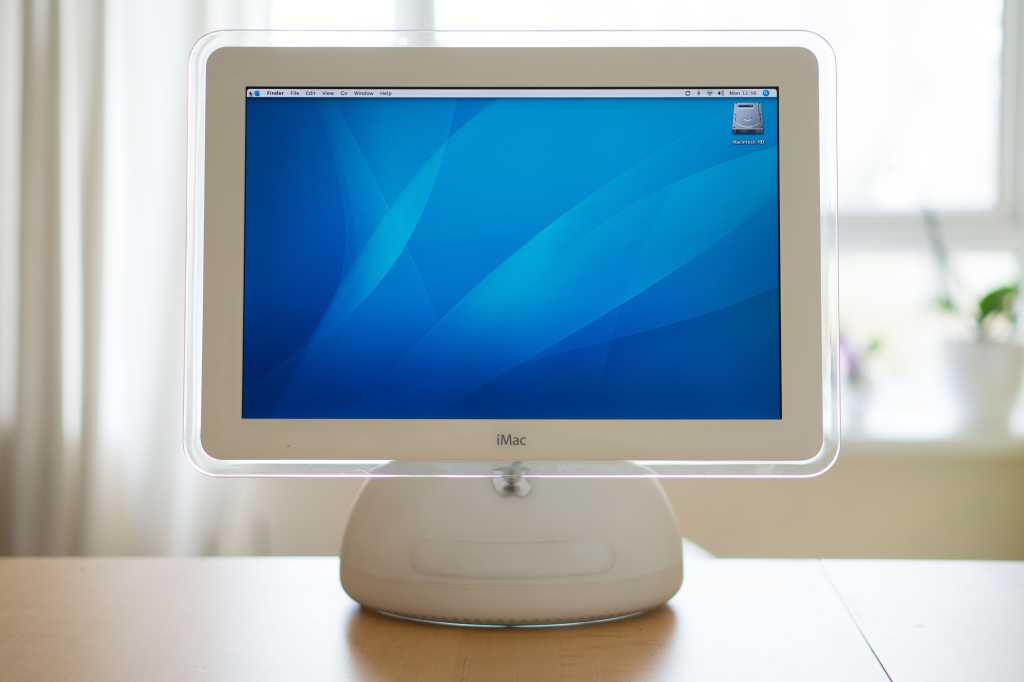 [Editor’s note: This article was written by Christopher Phin.]

Phil Schiller couldn’t have scripted it any better himself: The day after the G4 iMac was launched, I showed a picture of it to one of my tutors at university and her first quite genuine reaction was, “Where’s the computer?”

Today, with millimeters-thin iPads, and MacBooks that could blow away in a stiff breeze, that reaction sounds willfully obtuse—uh, the computer is in that vast, bulbous hemisphere under the screen—but in 2002, a time when both the industry and our desktops were dominated with hulking great CRTs, this new iMac’s light, airy, slim design honestly was bafflingly slight.

This was—and is—Apple at its best: Producing something daring, novel, and utterly desirable. Nobody at the time could fail to be impressed almost to the point of shock by the sheer chutzpah of Apple’s vision for a modern computer, and even today it strikes you as a fresh and exciting design.

Indeed, with its highly repositionable screen, it’s actually wildly better in ergonomic terms than anything that came after it, allowing the screen height and angle to be easily set to suit anyone working at it, and then tweaked throughout the day. The iMac G5 that replaced it—a basic recipe that the iMac has stuck with ever since—utterly abandoned this important and valuable trick.

There‘s another, less highbrow, but still hugely useful aspect to the display’s maneuverability: It was facile to swing it round to show a colleague at another desk something that was on your screen. Later iMacs would have a low-friction strip on their bases ostensibly to allow the same thing, but it’s nowhere near as flexible, and unlike on the iMac G4 where the cables are plugged into the base leaving the screen free to move, you’re always in danger of tugging a cable out when you try to twist a modern iMac around.

And when I say the screen is highly repositionable, I really mean it. It could be adjusted with a fingertip and would hold its position perfectly, and what’s more the angle at which the screen itself was tilted would maintain as you raised and lowered it.

It feels impossibly, magically smooth, and preposterously stable, like no other piece of engineering you’ve used before. Yet despite all this balance and precision, despite the whole computer looking, at least at launch, as delicate as gossamer, you were encouraged to move the iMac around by grabbing its neck.

The whole effect was of a machine that, while powerful and serious, was friendly too. It reminds you of nothing so much as Luxo Jr., Pixar’s anthropomorphized little Anglepoise lamp, and Apple completely embraced the puppy-like playfulness inherent in the design with its commercial:

The particular one I’ve photographed here is the 17-inch widescreen model from February 2003; the original was a 4:3 aspect ratio 15-inch screen, but for my money the proportions are a little off in that configuration. Likewise, the last model in the line, introduced in November later that same year, had a 20-inch screen, and that one looks too top-heavy to my eyes.

The model I have was also the first consumer Mac to hit 1GHz and the first to support AirPort Extreme, and it could be equipped with internal Bluetooth, an exotic innovation at the time. Add all this to its beautiful and smart design, and somehow it doesn’t feel like a vintage piece of technology, a Mac long since officially designated obsolete by Apple.

I appreciate the capability and flexibility of the 5K iMac I’m writing this on; I wouldn’t swap it for the iMac G4 as my main computer for all the neodymium in China. But it’s a cold, heartless beast compared to the cheeky little iMac G4. I like my 5K iMac; I respect my 5K iMac. But I can’t love it like I love the G4.