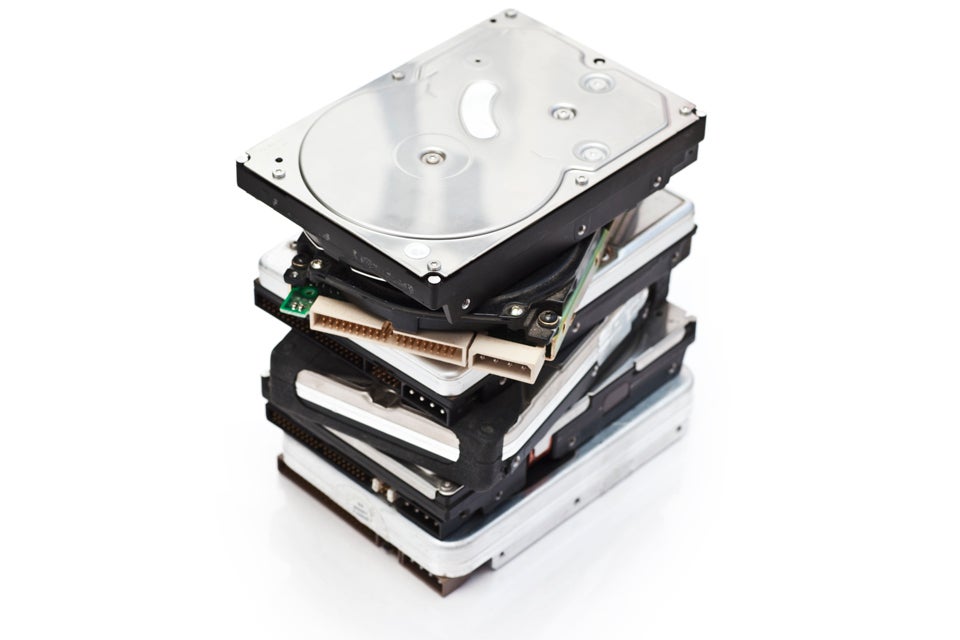 Cleaning out my office has been an uphill struggle.

Sure, sorting through all the crap that’s accumulated over the last six years is challenging. (When you get down to the strata of stuff that you trucked over from the last apartment is when you know you’re in trouble.) But as much as it’s been a pain to sort through all the out-of-date equipment, empty boxes, and stacks of paper, that’s nothing compared to the next step of the equation: old data.

Not only do I have a couple old Macs sitting here, no longer in active use, but worse I have half a dozen hard drives of various vintages. I’m lucky if they’re labeled, and doubly so if those labels are even close to accurate.

So I guess what I’m saying is: Hi, my name’s Dan. And I’m a digital packrat.

My current Everest is that stack of external hard drives. Storage has long been cheap, and that’s both a virtue and a vice. The former because you can always afford to have plenty of backups and when you run out of space, just slap in an external drive. The latter because since we can keep everything, we often do.

In certain situations, keeping around all that old data can be fun. I’ve got digital photos going back to 2000 or so, and every once in a while, I’ll remember a picture and dig it up—often just to marvel at how much more hair I had. My iTunes library has tracks that were added in 2002, and revisiting my college music tastes can be fascinating. Sorry, I meant “horrifying.” And it’s eternally sobering to dig up those stories I wrote on my Macintosh LC back in 1992—if I even still have an application that will open MacWrite II files.

In essence, I’ve compiled a chronicle of my life for the last 25 years or so, in text, image, video, and audio. Because, when in doubt? Keep it.

The result: a mountain of information, much of it unorganized. Because the idea of combing through it to find which files can be safely deleted and which should be carefully catalogued and archived is a daunting process, to say the least.

Why not keep all those old term papers, MIDI files, and emails? What’s the harm? Maybe some day I’ll get the motivation to dive back into all those files, like a historian unearthing ancient ruins of a long-dead civilization. (Though, if I’ve learned anything from adventure movies, there are some things that are best left hidden.)

In the end, I always put it off. Which is fine until I hit that point, years later, when I realize that what I’m left with is the virtual equivalent of all those papers I’ve been sorting through for the last few weeks.

The real problem is that I’m not sure what, if anything, is on these old drives that hasn’t already been migrated to my current systems. In some cases, I’m pretty sure that clones of old computers can safely be wiped because they I used them to populate my newer machines. But in other places I’m left with external drives that I used to dump data on whenever my computers were full up, and heaven only knows what’s on those.

So, the fear lingers: what if I delete some piece of crucial data that I don’t have stored anywhere else, and I can never again retrieve it. What will I do then?

In the tall weeds

Of course, the dirty secret is that I haven’t looked at the data sitting on any of these drives in years—so how vital could it be? Will I really miss it if I delete it?

Truth be told, it’s been cathartic, going through old stuff and throwing much of it out—freeing, even. That’s something I don’t do enough with all that old data because, as I said, unlike in real life, digital storage is cheap. Being a digital packrat isn’t nearly as stigmatized as the real-world kind: nobody calls the health department on you, and nobody puts you on a reality TV show.

But that doesn’t necessarily mean that we should hold onto each and every piece of digital information that passes through our lives. Sometimes culling and organizing is a valuable part of the process: I probably don’t need 75,000 emails dating back to my early 20s, and I could probably stand to excise a few of those super blurry pictures I took on my last vacation. Every once in a while, it’s good to sort out the things you really want to keep from the ones that you simply keep out of a sense of obligation.

Now, if you’ll excuse me, I think I hear some hard drives calling my name.