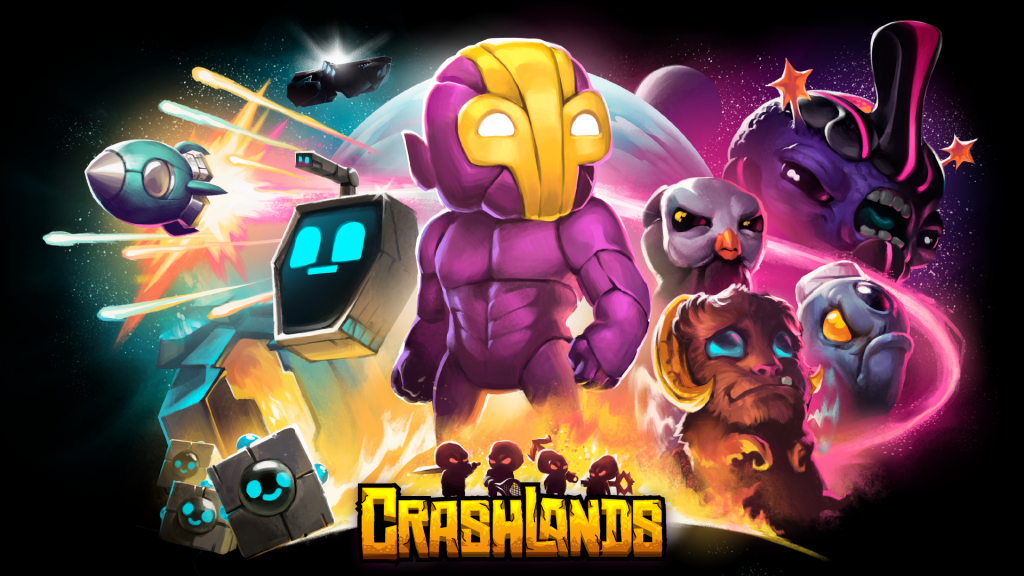 Think of the movie Castaway… but your sidekick is with a robot instead of a volleyball named Wilson… and you’re in space and not alone. That’s Crashlands—maybe not so much like Castaway, but it’s a humorous action-adventure role-playing game with a survivalist focus. Developed by Butterscotch Shenanigans, a team who finds themselves exceptionally funny (and are, for the most part), Crashlands tasks the player with surviving on an alien planet after your ship crashes. Your play a space delivery person, Flux, who has only her wits and her robotic companion (named Juicebox) to help her in a quest for survival.

Here are three reasons why this thoroughly silly game is worth your time:

Sci-fi survival: You start in a desolate alien landscape, and aside from your less-than-helpful robot companion, you don’t have a lot going for you. Through role-playing game mechanics and crafting, you’ll level up your character from sitting duck to unstoppable mechanized killer duck. From your base, you’ll start gathering resources like berries, logs, and stone. These can be crafted to build various stations, which will give you access to increasingly advanced machinations. This has lead to some obvious comparisons to one of my favorite games that has come out in the last year: Don’t Starve.

Humor in desperation: The comparisons to Don’t Starve are obvious: the resource gathering, crafting, and even artwork have some similarities. But while Don’t Starve has a Victorian, Edward Gorey aesthetic, Crashlands is more of what would happen if you gave the writers of Invader Zim an opportunity to craft a sci-fi survival game. From the opening sequence when your companion/moronic robot accidentally talks a villain into blowing up your ship to the ridiculous monsters (and the equally weird missions), Crashlands’ humor is often funny, quick, and inescapable.

Not so brave new world: While you start out unarmed, unarmored, and homeless, a resourceful adventure will start building up survival tools quickly. This is aided by various non-player characters scattered throughout the landscape who will give you missions and rewards. Most of these quests are simply an extension of what you’re doing anyway: you kill the weird cow/bison aliens, gather resources, and explore. But they’ll grant you access to better equipment and move along the story. More importantly, they’ll give you access to warp spots that allow you to jump around the map in seconds, which is a real time saver.

The player-friendly approach ensures the game is challenging, but without being a slog. You’ll still have to hike through various parts of the map, but warp spots help cut down the backtracking. The wildlife is numerous and deadly, and even after getting a weapon you’ll find there is a great deal of skill involved in actually defeating them to harvest their precious organs and bones. You can expect to die a great deal and thankfully, the penalty is a loss of resources (which you can reclaim by visiting your grace) and a return to your home base. Compared to some survival games’ use of permadeath, Crashlands encourages exploration and bravery while reducing the constant panic that an errant critter will kill you and ruin hours of work.

For those looking for a deep, exceptionally-bizarre RPG, Crashlands is a great place to land.

Chris is a former Macworld editor who has turned to a life of crime.