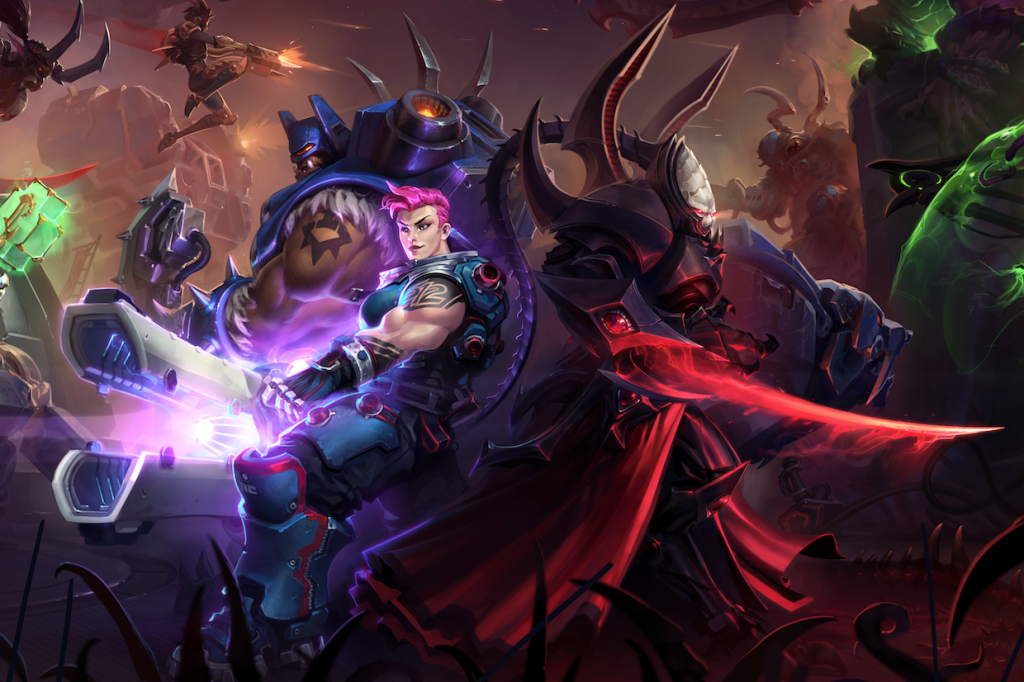 Did I mention that these games and other top MOBAs are available to freely play and enjoy without any sort of payment required? MOBAs have rewritten the rule book on what to expect from free-to-play games on any platform, and have shown that players can be hugely engaged for the long haul with complex freemium experiences. You’ll even find MOBA games for iPhone and iPad, too!

Most MOBAs tend to follow the same basic gameplay tenets. They’re derived from real-time strategy games and typically use an overhead perspective, which is where you’ll view your hero and others in the five-on-five online skirmishes. The objective is to work with allies and computer-controlled minions to slay enemy heroes and systematically destroy their turrets, all with the goal of demolishing their base before yours can fall.

With the recent release of Smite for OS X, the genre’s most popular games are all on Mac. Don’t know where to start or which game might be best for you? I spent some hours with League of Legends, Dota 2, Heroes of the Storm, and Smite to figure out what the fuss is all about—and how each eases you into the genre and empowers your early play.

What it is: Even if you don’t play MOBAs, you’ve probably heard of Riot Games’ League of Legends (LoL) after nearly seven years of growing popularity. Over that time, it has established itself as the genre’s cornerstone and evolved and expanded all the while, now offering more than 130 playable champions. It’s a five-on-five affair with multiple maps and play variations available, and it’s a huge eSports sensation with millions of dollars up for grabs for top teams.

How money works: League of Legends uses a rotating system that lets you use a handful of champions for free at any given time—otherwise, you can spend in-game currency to buy and permanently unlock any of them. They can be purchased with either earned or premium currency, with the latter costing about $7 to $8 for some champions. Specialized skins can be even pricier, and there are premium boosts, runes, and accessories as well. Spending money can bring huge benefits in LoL.

Early play: The initial tutorial only lasts about 10 minutes, but it does a fair job of running you through the core play essentials in a simplified format. From there, you can play a training match with bots, but you can’t jump right into full competition against real opponents: You’ll have to reach level 3 with your player profile before that’s an option.

While that might be disappointing for anyone eager for live action, it’s not a bad thing: You’ll team up with four other low-level players and battle an A.I. team, which means you’ll all learn at the same time against easier enemies—and high-level players won’t have to deal with your meager skills. After a few matches, you’re welcome to set off into standard team battles. You probably won’t be very good at first, while trying to find an ideal champion and learning the ins-and-outs of each map, but hopefully the established players won’t scare you off.

Recommendation: League of Legends sits in a happy medium for the genre. It’s not the most streamlined or approachable game on this list, but it also doesn’t feel hugely punishing right out of the gate. The amount of content and gameplay possibilities is a bit overwhelming, to be honest, but stick with it (and play with friends) and you’ll probably feel reasonably confident out there before too long. All of the paid gameplay perks might be a bit frustrating, however, especially if you don’t plan to spend.

What it is: Intended as a true, standalone sequel to Defense of the Ancients (the Warcraft III fan mod that created the genre), Dota 2 is considered the MOBA of choice for hardcore players. It’s a tough, yet rewarding experience—one that tasks your five-player team with destroying the Ancient statue in the enemy base. It seems pretty similar to League of Legends on the surface, but it can be a more complex experience, not to mention a more punishing one. Valve’s game, playable on Steam, has upwards of 14 million monthly players.

How money works: Despite the challenge, Dota 2 is actually the friendliest of the bunch when it comes to spending money. Why? Because the 110+ heroes in the game are fully free from the outset and at all times. Still, Dota 2 has a ton of items to buy, but things like character skins and equipment are purely cosmetic. In other words, you might look and feel more like a badass, but you won’t see tangible benefits as a result. You can also buy tickets into playable events with real prizes, as well as new announcer voices and other flourishes.

Early play: Dota 2’s tutorial only lasts about 10 minutes, which didn’t seem nearly long or comprehensive enough, and that feeling was affirmed when I was dumped into a game against bots. Across an arduous and absolutely mind-numbing 55 minutes, I made impossibly slow progress in a practice game with weird limits and minimal explanation. It was a terrible first impression, and if I weren’t playing for this article, I’m not sure I would’ve stuck around.

But then I jumped into proper unranked matches against real, live opponents and I won my first two games—and felt like I played a solid role in making that happen. It’s hard to know whether that exhausting practice match did the trick, or maybe it was hero selection (or just luck), but I felt really good about it. But then my team lost horribly the next time out as a teammate trashed our play. Now that’s the side of the Dota 2 community I’ve heard so much about.

Recommendation: Dota 2’s matches can be long while its hero showdowns can be short and severe, and the tutorial doesn’t leave the best impression. It’s a technical and precise MOBA, but that also means you’ll probably have a slow and possibly painful grind to moderate skillfulness.

A good friend of mine has played nearly 2,000 matches of Dota 2 and has some 2,700 hours on record in the game, so the hardcore allure is definitely there. If you’re just learning the basics of the genre, however, you might want to start elsewhere and then try and shift over. With enough time and persistence, you might get good—but the short-term rewards may be thin.

Heroes of the Storm

What it is: Warcraft creator Blizzard Entertainment had nothing to do with the original Defense of the Ancients, but Heroes of the Storm is the studio’s proper entry into the genre. It’s a slightly simpler take on the genre, streamlined and with generally speedier matches than in other games, and the best part is that it mashes up characters and settings from Warcraft, Starcraft, Diablo, and more.

How money works: As with League of Legends, a handful of the characters are available for free use at any given time, while any hero can be permanently unlocked using either earned currency or real money. Luckily, you don’t have to buy currency and figure out conversions, as the in-store prices are in your local currency. Heroes can cost as much as $10 in real cash, plus there are cosmetic skins that range wildly in price, along with paid boosts that amp up your experience and match rewards.

Early play: Heroes of the Storm takes its time early on, with the three-part tutorial taking about 40 minutes to complete in total. It’s also surprisingly funny, showing a lot more personality than the other games on this list. From there, you can do training matches with A.I. opponents or jump right into Quick Match battles against real foes.

What’s great about Blizzard’s MOBA is that it trims down some peripheral details so you can learn quickly and focus on your objectives. There’s no in-match store to worry about, the matches are fairly straightforward, and experience is granted team-wide. Even the matches seem shorter than in LoL and Dota 2. However, the downside is that Quick Match battles tend to pit you against more hardened, higher-level players, which can be frustrating early on.

Recommendation: Even so, Heroes of the Storm really is an ideal starter MOBA for people who don’t know the genre at all. It looks great, has a great sense of humor, and best of all is streamlined for accessibility. The tutorials do a nice job of preparing you for the actual battles, and then you ought to be able to take it from there. Unless you’re set on LoL or Dota 2 because that’s what your friends play, Heroes of the Storm is a smart entry point.

What it is: Smite is the anomaly on this list: while it conforms closely to the core MOBA tenets seen in games like League of Legends and Dota 2, it’s played from a third-person camera rather than an overhead one. While that doesn’t necessarily make it more action-packed, it does make the action feel more immediate and immersive. Another key difference comes with its focus on gods from different cultures, like Ra, Athena, and Poseidon.

How money works: Like in League of Legends, Smite offers a rotating selection of free gods and then charges for permanent access to the rest. You can use either earned currency or buy the premium stuff, with the latter price being about $4 per god. However, Smite has a big perk: For $30, you’ll unlock every current and future god for full use. It’s like paying for the “full version” of the game, although there are other purchases available for skins, chests, and other goodies.

Early play: Hi-Rez Studios’ game takes a Heroes of the Storm-like approach to gradually guiding you through a few tutorials, imparting the basics and letting you try them out against bots. In addition to the traditional five-on-five MOBA mode, Smite also has combat-centric arena battles, so you’ll run through those as well. They’re a bit dull by comparison, but if you love hacking and slashing, it’s there.

Otherwise, Smite really does feel like a MOBA played from behind the back of your character. It’s not as eccentric or polished as Heroes of the Storm or as complex and unforgiving as Dota 2, but the same fundamentals that apply in those games work here, too.

Recommendation: Smite doesn’t seem to have as many dedicated players as the titles above, or is it as huge of an eSports, but it’s a solid alternative to something like League of Legends. The tutorials can drag a little bit, but they run through all of the key bits and get you prepared for the real online matchups. If you find a top-down view too far removed from the moment-to-moment combat and action of a MOBA, then give Smite a shot.