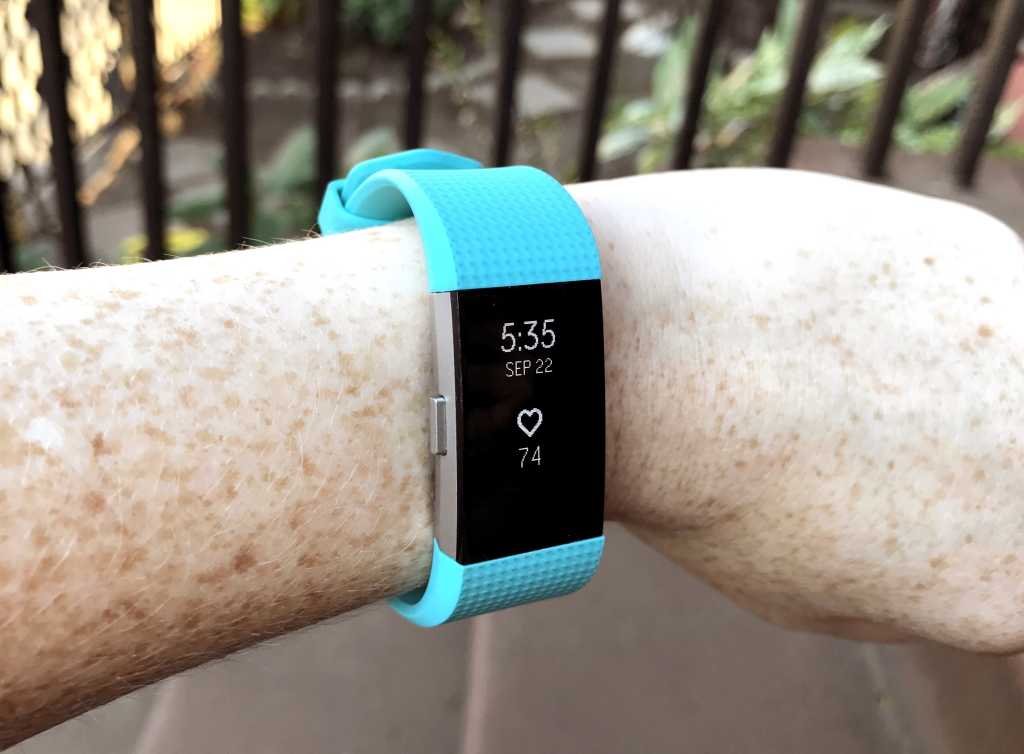 Caitlin McGarry / IDG
At a Glance

Fitbit owns the activity tracker market, but its most popular fitness band was in need of a reboot. The Fitbit Charge HR has everything you could want in an inexpensive fitness tracker, but its tiny display was outdated and its features were in need of an upgrade. So Fitbit launched the Charge 2, which offers a suite of new features in a package that’s just as chunky as its predecessor.

That may be unfair. I was hopeful that the Fitbit Alta was a sign of less Fitbit-looking bands to come, but Fitbit kept the HR’s width and textured elastomer band—both signs that you are very obviously wearing a fitness tracker.

But let’s dig beneath the surface, where the Charge 2 is more impressive.

All the new features

If you already own a Charge HR, you’re familiar with all the reasons why it’s the best-selling fitness band around: continuous heart rate-monitoring, automatic exercise-tracking, sleep-tracking, and silent alarms, plus a solid dashboard in the Fitbit app and social challenges that motivate you to work out. The 5-day battery life isn’t too shabby, either.

The Charge 2 has all that and more. The most noticeable difference is its OLED touchscreen display, which is four times the size of the Charge HR’s tiny screen. Now you can tap the screen to view stats like step count, calories burned, and daily mileage. There’s also a side button for accessing other options, like starting a run or launching the new Relax feature.

Relax is similar to the watchOS 3 Breathe app. It encourages mindfulness and more focused breathing, which is useful on stressful days. Relax isn’t as slickly designed as the Apple Watch app, and doesn’t make use of its vibration motor to guide your breaths like Breathe does. But Relax’s undulating circles are mesmerizing all the same and get the job done—after a 2-minute breathing session, I do feel more calm.

I prefer the Charge 2’s movement motivators to the Apple Watch’s hourly Stand reminders. Like the Fitbit Alta, which launched earlier this year, Fitbit’s latest tracker prompts you to talk a walk around and aim for a manageable number of steps to reach your daily goal. That’s more effective than being nudged to stand up, which at this point I just ignore.

Like the Charge HR, the second-generation Charge is resistant to sweat, rain, and splashes, but you can’t swim or shower with it on. It also lacks GPS. You can enable GPS in the Fitbit app on your phone to accurately track and map runs and bike rides, but that obviously won’t work if you don’t carry your phone with you when you exercise.

I don’t love how chunky the Fitbit Charge 2 is, but if you’re used to the Charge HR, then the new version won’t bug you. Like its predecessor, the Charge 2’s band comes in a variety of colors—blue, black, purple, and teal—but Fitbit made its new tracker more versatile with interchangeable bands. Like the Alta, you can separate the band from the Charge 2 body and replace it with a more stylish leather option, which makes this tracker more versatile to take from the gym to the office.

I like the Charge 2 far more than the Blaze, Fitbit’s answer to the Apple Watch. The Charge 2 doesn’t have the Blaze’s colorful screen and doesn’t look like a watch, but that’s a good thing—and you can still see call, text, and calendar alerts on the large new display. Plus, the Charge 2 is $50 cheaper than the Blaze. Compared to the rest of the Fitbit lineup, it’s clearly the best of the bunch, even though I personally would prefer those features come in a slimmer, Alta-sized package.

Fitbit has held on to its dominance of the wearable market despite challenges from Misfit, now owned by Fossil, the stagnating Jawbone, currently tangled in a legal fight with Fitbit, and Apple, whose Apple Watch is positioned as the ultimate health and fitness device. Apple added GPS and made its wearable swim-proof with the new Apple Watch Series 2, but it’s also $200+ more than the Charge 2.

The Blaze was a misstep for Fitbit, and not just because of its unfortunate charging cradle. The company can’t compete with Apple, and it doesn’t need to try. Fitbit Charge 2 proves that Fitbit is paying attention to what its customers want: advanced and accurate fitness-tracking features at an affordable price—and since the device isn’t tragically hideous (just a little too bulky for my liking), it’s even better.