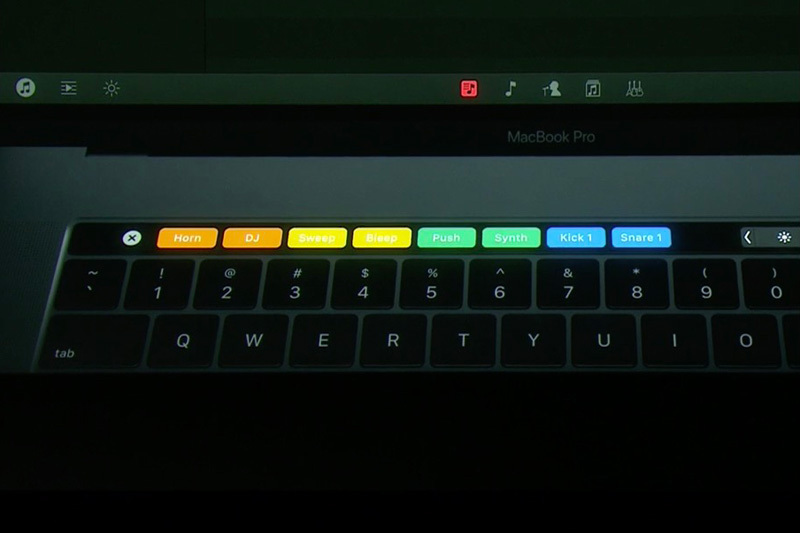 It’s been rumored for some time, and it even made an appearance in the macOS Sierra 10.12.1 update, but on Thursday Apple officially revealed a new MacBook Pro. The killer surprise-and-delight feature? It’s called Touch Bar, an OLED panel that replaces the row of function keys usually found on the top of the Apple laptop keyboard.

The Touch Bar does a lot of things, but the headline feature may be support for Touch ID. When you encounter a process that requires you to show your fingerprint (such as Apple Pay), you place your finger on the Touch ID area of the Touch Bar. The Touch ID sensor is integrated with the power button.

The functions provided by the Touch Bar change based on the software you are using. For example, if you’re using iTunes, the Touch Bar lights up with icons representing player controls. During a chat, the Touch Bar can be used to instantly place emoji. In the Photos app, you can access editing functions on the Touch Bar and apply those edits to the photo you’re working on.

Customizing the Touch Bar can be done using drag and drop. You can select the functions you want on the main screen, and drag them to the location your want off the bottom of the MacBook Pro’s screen and onto the Touch Bar.

Hands-on: The MacBook Pro’s innovative Touch Bar will grab you

Apple also updated the Force Trackpad, which is now double the size of the previous trackpad. The new keyboard takes its cues from the 12-inch MacBook; the MacBook Pro keyboard is is based on butterfly switch technology, but Apple called this a “second generation” butterfly switch that’s more responsive to better suit the demands of pro users.

To help cut down on the weight and size on the MacBook Pro, Apple shrunk down the size of the speakers. But according to the company, there’s no sacrifice in audio performance; Apple claims that the speakers have twice the dynamic range, 58 percent more volume, and 2.5 times more bass response than its predecessor.

The most drastic change is to the ports. Apple is going all in with Thunderbolt 3, providing multiple Thunderbolt 3 ports on the MacBook Pro—there are no USB-A ports. There’s also no MagSafe adapter port; charging is done through Thunderbolt 3. The MacBook Pro’s Thunderbolt 3 support USB-C, so users can still connect their USB devices, but you’ll need a USB adapter.

While it seems like Apple is doing what it can to make the headphone jack obsolete, it still lives on the MacBook Pro—it’s the only other port type featured on this new machine. The MacBook Pro no longer has an HDMI port. The SD Card slot is gone, too.

According to Apple, the LED-backlit IPS displays in the new MacBook Pro are now 67 percent brighter, have a 67 percent higher contrast ratio, and can display 25 percent more colors than previously. The displays offer 500 nits of brightness and support for the P3 wide color gamut.