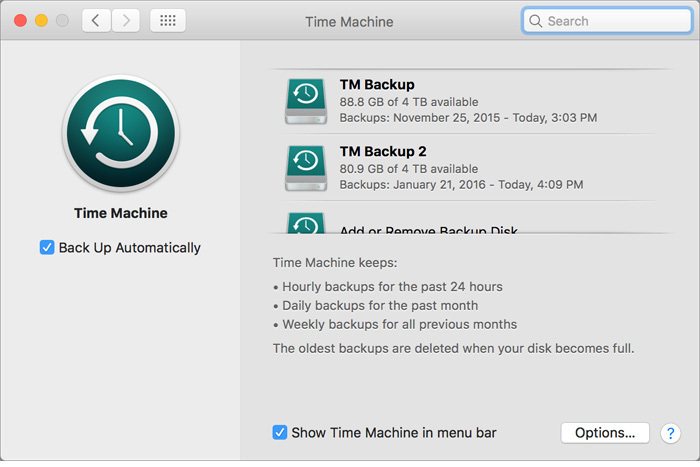 Everyone needs to backup their data. No matter what’s on your Mac, if you lose files, you’ll be in a pickle. You may be able to work solely in the cloud, using services such as Dropbox, Google Docs, or Microsoft Office, but there are still essential files on your Mac.

Kirk’s first law of data protection is this: “It’s not a question of whether your hard drive will fail, but when.” If you’re lucky, and if you upgrade your computers frequently enough, you may never see disk failure, but trust me: it eventually happens.

Apple is well aware of this, and its Time Machine backup software is designed to make backups automatic and idiot-proof. Introduced in 2007 with Mac OS X Leopard, Time Machine has saved a lot of bacon over the years.

Time Machine works with two types of drives: local, external hard drives, and network drives. With the former, you can either keep a drive connected to your Mac (which is easy if you have a desktop Mac) or connect it from time to time (if you have a laptop) so Time Machine can automatically make copies of your files. If you’d rather not connect a drive, you can use a network drive: Apple’s now-discontinued Time Capsule; a USB drive connected to an also discontinued AirPort Extreme; or some network-attached storage devices that support this feature.

Backups to an external drive just copy files—and hard links, pointers to files that haven’t changed—in a more or less normal way, in a directory structure that mirrors that of your Mac’s drive. But with a network drive, Time Machine doesn’t just copy files to the drive itself, but rather to a sparseimage, a kind of disk image that is expandable.

When you use a network drive for your Time Machine backups, you can have problems. (I’ve heard of this occurring on an external, connected drive, but only rarely.) You may see an ominous dialog saying “Time Machine completed a verification of your backups on diskname. To improve reliability, Time Machine must create a new backup for you.” When this happens, you lose all your existing backups. You may have years of backups on your drive, and they’ll all disappear.

This is wrong, and should never happen.

While some users have found ways to access some or all of the files in a corrupted backup, this sort of command-line chicanery shouldn’t be necessary. Time Machine—or at least macOS—should have some sort of troubleshooting tool to recover as many files as possible when a backup gets corrupted. It is surprising that Apple can be so flip as to tell you that you’ve lost your backup, and essentially just say “No biggie.”

Recovering files from a corrupted backup isn’t easy, and could take a very long time. But at least you’d get some or most of them back. Since you’ve entrusted Apple—their software, and often their hardware, the Time Capsule—with your backups, it’s the least they could do. Instead, they just shrug and tell you to move on.

Backups are important, as Apple knows. This sort of failure should always offer a way to recover as much data as possible. Apple is letting users down by not helping them recover files when this happens.