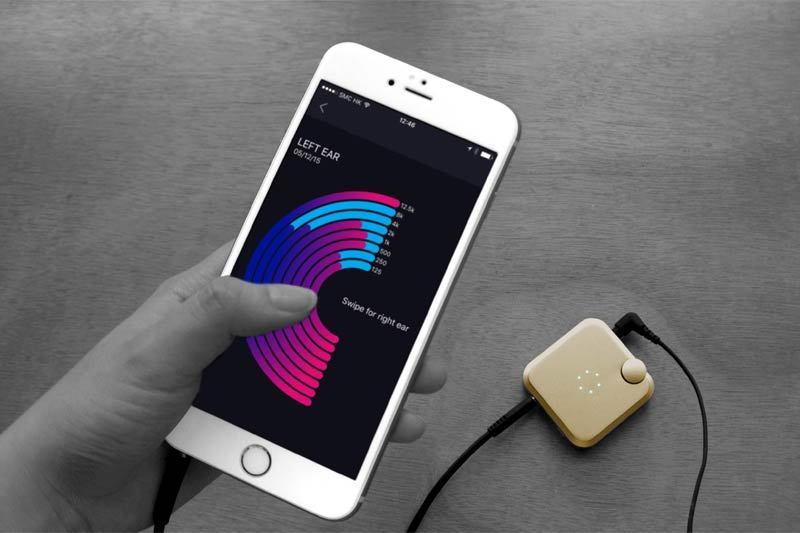 Aumeo Audio
At a Glance

No two people are alike, which is especially true in the case of how the human ear perceives sound. Despite this, manufacturers have little choice but to market headphones and earbuds using the “one size fits all” approach, relying upon the generally inadequate EQ settings built into mobile devices to help tailor music to individual listeners.

Available in silver, black, or gold, Aumeo ($199, available on Amazon) is a small square gadget that processes audio output from your smartphone or other source and tweaks it to sound better on any pair of wired headphones. Measuring a diminutive 2.17 x 2.17 x 0.47 inches and weighing only 54 grams, the device provides up to six hours of playback when used wirelessly, or as much as eight hours when used with a wired source.

The hardware works by creating profiles customized to each listener using the free AumeoHub app for iPhone or Android. (The app works on iPad, but offers no native display support.) Aumeo pairs via Bluetooth, playing a series of test tones during setup which measure how sensitive your ears are to eight different frequencies: 125Hz, 250Hz, 500Hz, 1,000Hz, 2,000Hz, 4,000Hz, 8,000Hz, and 12,500Hz. The listener turns the volume knob until each tone is barely audible, saving a new profile with a custom name.

Setup must be performed once for each set of headphones, but after that the app is required only when changing to another pair of headphones. This is done by selecting one of the saved profiles (you can save an unlimited number of them) and tapping Apply to send it to the device, a process that takes about six seconds.

Although Aumeo uses Bluetooth for pairing or streaming audio from your smartphone, Bluetooth headphones are not supported. Processed audio is only output from the 3.5mm jack on the base of the unit, adjacent to the micro-USB port used to recharge the device. There’s also an audio input jack on the top, which is used to route line-level audio through the device; a toggle on the side switches between inputs.

I tested Aumeo using a variety of headphones, from my Sony MDR-7506 closed-ear studio cans to the lowly pair of cheap earbuds included with my Roku. While the processed audio sounded richer in most cases, some music sounded worse—Metallica’s “Enter Sandman” was mostly high end and midrange, for example. Regardless of input, Aumeo produces a constant low-level hiss compared to headphones alone, especially noticeable during quieter passages of music. Audio levels were also lower overall, even with my iPhone 7 Plus and the Aumeo volume knob at maximum.

I was disappointed to find my Sony headphones sounded muddy with Aumeo, while the results were more impressive with Klipsch S4i earbuds. You can press the volume knob to temporarily disable Aumeo processing, but the reduced volume level never sounded as good as headphones alone. In general, Aumeo works best with cheaper headsets, but you shouldn’t expect miracles.Those Roku earbuds still sound terrible either way.

Aumeo Audio customizes audio to sound its best, but results vary depending upon the headphones used and type of music being played.