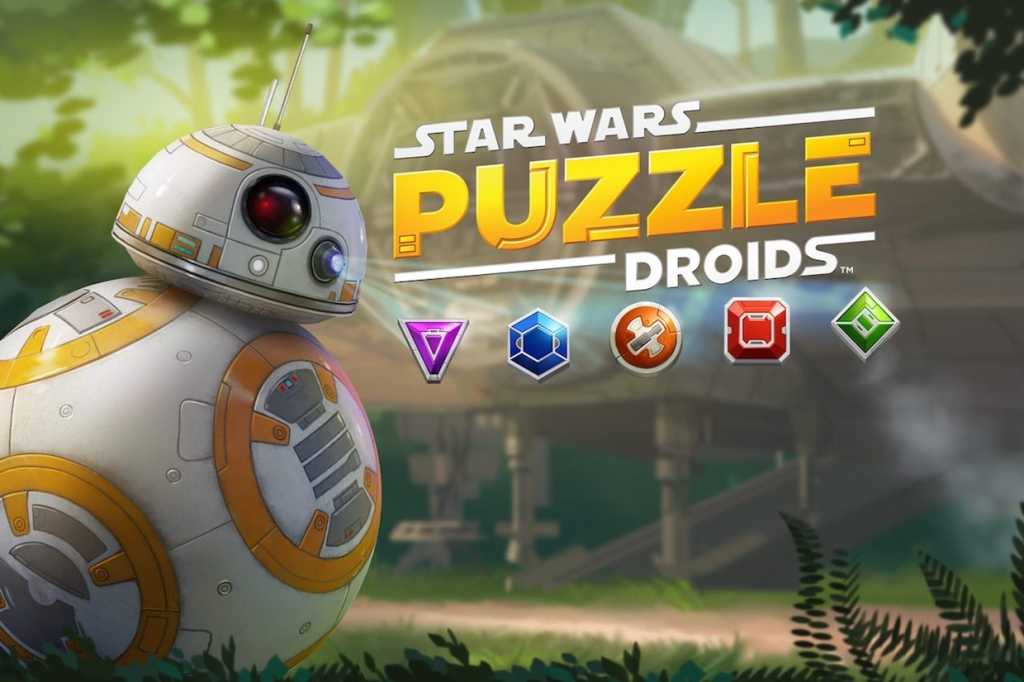 With past games like Angry Birds: Star Wars and the Tiny Tower-based Tiny Death Star, we’ve seen the beloved sci-fi franchise merged with proven iOS game experiences—and the results were pretty positive in both of those cases. Star Wars: Puzzle Droids is the latest such amalgamation, and while it’s not legally Candy Crush Saga: Star Wars, that’s exactly what you get.

This “tribute” to the mobile puzzle phenomenon doesn’t deviate much from King’s money-printing design, but it does implement the Star Wars license in entertaining ways, plus the challenge rises at a more reasonable and predictable rate. The result, while not original in any way, is an enjoyable, on-the-go diversion that you shouldn’t feel pressured to spend money for.

Have you played any of the Candy Crush Saga games, or perhaps one of the endless clones that seem to multiply on the App Store? If so, then you’ll feel right at home here, as Star Wars: Puzzle Droids doesn’t make any big changes to the common formula. And if you haven’t, then it’s really not difficult to pick up in a hurry.

Puzzle Droids is a match-three game that challenges you to link up sets of three or more like-colored icons on each game board. Creating a trio in a row or column clears them from the board, and then all the others above and around those empty spaces shift to fill the gap, potentially causing more combos in the process. And if you make larger pairings, such as a square of four icons, a line of four or five icons, or an L-shape of five, then you’ll get some kind of special item that can help take out larger chunks of the board.

You’ll do all of that to meet the specific objective in each level, whether it’s clearing a certain number of particular icons, scraping away special tiles that clutter up the board, or making items drop to the bottom by clearing a path below. And in familiar fashion, you’ll have a limited number of moves in each level to complete your task(s).

Nothing here really breaks from the Candy Crush formula, so if you’re expecting something revolutionary from Star Wars: Puzzle Droids… well, don’t. What Puzzle Droids does well, however, is dress the action up with more enticing framing inspired by Star Wars: The Force Awakens. You’ll connect icons while the ever-adorable BB-8 rolls along the top, or clear panels by making nearby matches and watch Rey swing on her rope to pull them from view. Later, you’ll battle Unkar’s thugs in the market to try and control more of the board, or make matches as TIE Fighters blast holes in the board every third turn.

They’re clever little adaptations of the film’s events, and for a Star Wars fan, it might be a lot more appealing than the lollipop-sweet aesthetic of Candy Crush and other similar games. It was for me, at least. And thankfully, the game is friendlier too.

Puzzle Droids is a free-to-play game, just like Candy Crush and most of the other clones, so it’s no surprise to see opportunities to spend money, as well as limitations on play.

The energy meter up top lets you amass five quick losses before you’d need to either pay for a refill or wait for your droids’ batteries to replenish—each one takes 30 minutes of real time. Likewise, you’ll encounter occasional barriers between levels that block your path unless you wait a few minutes, but they’re easily overcome: you can just play the “expert” version of past stages to earn extra coins, and spend those to skip the delay.

What is surprising, given the Candy Crush homage here, is that Puzzle Droids isn’t terribly difficult in the early hours. I’ve completed more than 60 total levels, between the standard and expert versions of stages, and only run into a couple of instances where I had to play a level a few times over to finally overcome the challenge. And I never felt backed into a corner where I’d need to spend real money on power-ups to break through a wall and continue ahead. Contrast that to last year’s Candy Crush Jelly Saga, which had me ready to give up in half the stages, and that’s after I spent $20 on power-ups.

Star Wars: Puzzle Droids is ready to sell you big bundles of premium gems, ranging in price from 100 gems for $1 to 10,000 gems for $75, and you can spend those to continue a stage by adding extra moves, or use them to buy additional power-ups. But while I usually spend a bit of money in free-to-play games to see how that changes things, I didn’t bother here—because I never used up all of my freebie items, and didn’t feel pressured to use many continues.

Your experience may vary, of course, but I don’t consider myself especially skilled at these games and I haven’t had much difficulty across several hours of playing Star Wars: Puzzle Droids. It’s a light and attractive diversion, essentially—at least across the first few dozen levels. That may not be the case in the later stages, with just over 100 total available as of this writing, but my steady progress so far is encouraging.

Disney’s latest doesn’t do anything particularly daring with the match-three genre, let alone the Star Wars brand, but its thoughtful touches and attractive storytelling make Puzzle Droids a fun fan pick for low-key puzzling. Besides, we can all use a bit more BB-8 in our lives.