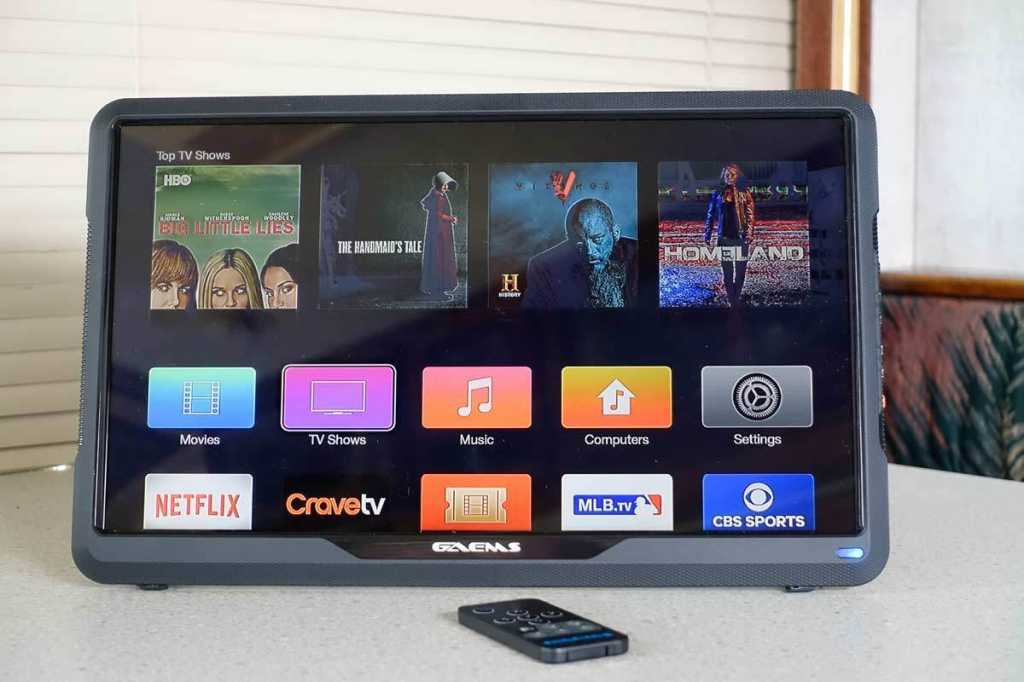 Séamus Bellamy/IDG
At a Glance

Having a TV at home to watch movies or play some console games on a rainy day is a huge win, especially if you have kids to entertain. And while rocking an ultraportable device like an 9.7-inch iPad Pro or a 12-inch MacBook might make your load lighter for business travel, the small dimensions of their displays make them less than ideal for multitasking when the time comes to get some serious work done.

A great solution to both of these scenarios is to invest in a portable monitor that offers a high-enough resolution to allow it to be used for watching movies and gaming, yet is still compact and light enough to be packed up and tossed in a carry-on bag.

Sound good? Then you might like the Gaems M155 Performance Gaming Monitor ($170 on Amazon). While it was designed as a mobile display for hardcore gamers to drag along to LAN parties, for the rest of us, the M155 is a reasonably priced, lightweight HDMI-capable jack of all video trades.

The first thing you’ll find if you commit to a web search for the M155, is that there’s two versions of this thing out there: an older model with poorly placed ports, rickety build quality and no audio, save what a 3.5mm port could afford. The new version of the M155 corrects all of these problems and improves upon the original’s design in a number of other ways which make it a very desirable product to get your meat hooks on.

Featuring a 15.5-inch 720p (1080p scaled) display, the M155 is designed to connect to any HDMI enabled device. Have an Apple TV? Plug it in. Want to hook up an iPad to do some typing on a larger screen or to rock a second display with your MacBook? Pack the appropriate dongle and get down to it.

As the M155 weighs just under two pounds and comes with a neoprene sleeve to keep it safe in transport, you’ll never have regrets about bringing it along with you. Gaems sells the M155 as a pricey package deal with sturdy backpack designed to carry the display and the gaming console of your choice. But you likely don’t need it. If your bag is large enough to stow a 15-inch MacBook Pro in it, it’ll likely work just as well for stashing the M155 in it.

Setting up the M155 to use couldn’t be easier. Simply remove it from its slipcase, push its integrated rubber feet into position and plug it in. You won’t find any ugly wall warts here: the display can be powered with nothing more than a USB cable and a mobile phone power adapter. As you likely already carry both of these items with you when you travel, that’s a slam dunk.

With the juice flowing, next, plug one end of an HDMI cable into the M155 and the other into a compatible device or dongle. You’re ready to enjoy video with a 16:9 aspect ratio, play games or get a bit of typing done.

Out of the box, I found that the M155’s colors were a little more saturated than I cared for. I was quickly able to correct this issue using the display’s included IR remote. Through the M155’s menu interface, it’s possible to change color, contrast and lighting levels as well as tweak the audio coming from the display’s adequate (but underwhelming) speaker. To customize video and audio, you can rely on a handful of presets or delve into the nitty-gritty of granular adjustments—a welcome surprise from a relatively cheap display.

One issue that I wasn’t able to correct was the M155’s lousy viewing angles. Unless you’re seated directly in front of the display, you’re not going to see much. Its visibility issues are compounded by the display’s high-gloss finish, which acts as a fingerprint and dust magnet. Even while watching it in overcast conditions, I found that I had to position myself, just so, in order to avoid seeing myself and light from my home’s windows reflected back at me. That’s frustrating.

Once you get it set up to meet your expectations for satisfactory video levels, sounding right, and not reflecting the full fury of the sun into your eyeholes, however, the M155 affords a pretty decent viewing experience.

With it attached to my PS4, I found that the M155 didn’t drop a single frame during a Fallout 4 marathon. Watching movies on my third-generation Apple TV or iPad Pro proved just as buttery smooth.

That said, I found that using it as a second display for my 13-inch MacBook Pro with Retina Display was less impressive. Text appeared a little bit fuzzy. But that’s something I’ve run into with other displays with similar specs to the M155 in the past—and honestly, when you’re comparing the Retina display of a $2,700 computer against that of a sub-$200 piece of hardware, you’ve got to expect to be underwhelmed. So, maybe use it for displaying your calendar, Omnifocus to-do list, and Twitter feed, but avoid using it for photo processing or typing out a lengthy document.

Easy to set up, feature-packed and at a reasonable price point, the Gaems M155 Performance Monitor should have been easy for me to like. But its poor viewing angles, screen glare and propensity for showing off every fingerprint smudge and piece of dust that falls on it left me willing to recommend it, but with a few reservations.