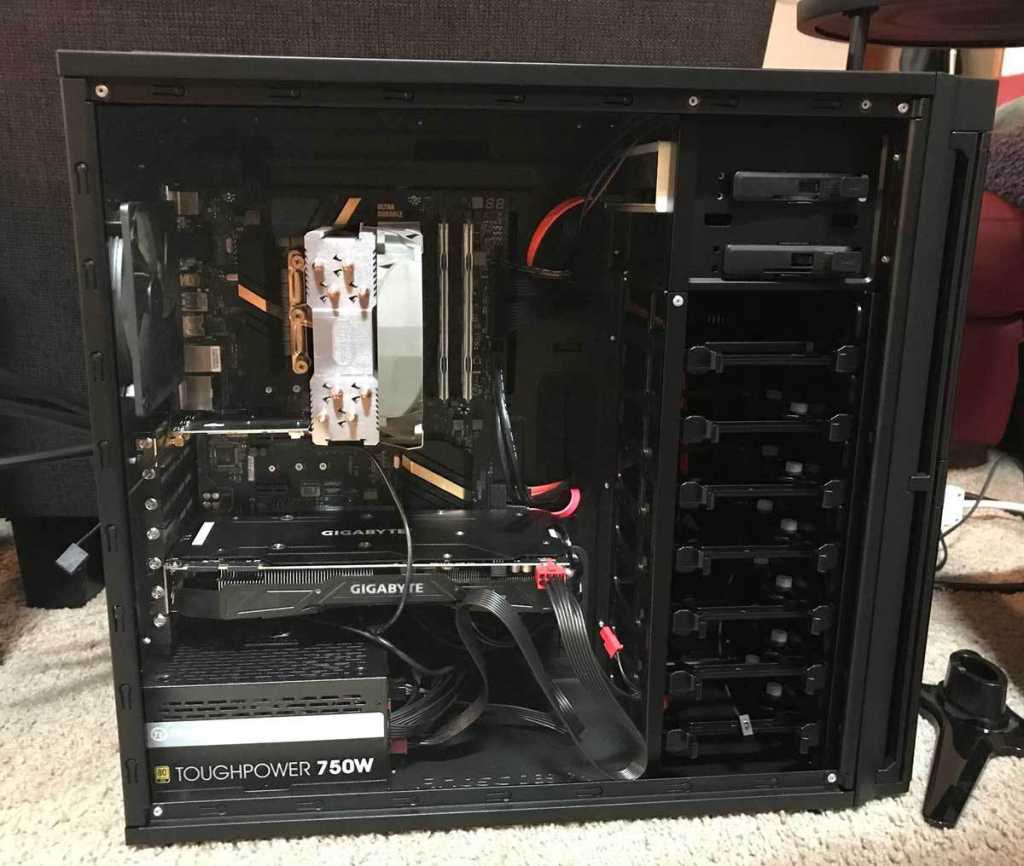 Fellow Macworld contributor Kirk McElhearn recently built a mini Hackintosh; that is, a generic PC styled like a Mac mini, on which he installed and ran macOS. This is a road I’ve gone down myself, way back in 2008, when I built my Frankenmac. As Kirk was building a relatively low-end Mac clone, and as Apple has ignored the high-end Mac Pro for so many years, I thought it’d be interesting to build a new high-end Frankenmac.

My current machine is a late 2014 5K iMac, and while it works well for most tasks, it really suffers when I pursue my avocation: Flying the X-Plane flight simulator. Frame rates can vary from decent to slow, and the iMac’s fan ramps up nearly as soon as I launch the simulator. In the end, the simulator is what really drove my desire to build a new Frankenmac: I wanted a machine that could run X-Plane really well, without a screaming loud fan, and hopefully be used as my iMac replacement (at least until the “new new” Mac Pro is released).

The key to this project was Nvidia’s announcement of Pascal drivers for the Mac. This meant that I could put in a leading-edge video card—one of the GeForce GTX 10 series cards. These cards will easily outperform (in games, at least) anything in any Mac that Apple currently ships.

I won’t provide as much detail as did Kirk, but here are the components I used.

Like Kirk, I went with Gigabyte for the motherboard; for me, a GA-Z170X-UD3 ($130 on Amazon). My motherboard doesn’t have Wi-Fi, but I added it with the Fenvi 802.11AC Desktop Wifi Card ($70 on Amazon). This card is favored with Hackintosh builders, as it supposedly supports Handoff and Continuity without any troubles.

I chose an Intel Core i7 6700K 4.0GHZ CPU ($300 on  Amazon). This is basically the fastest desktop-class CPU that’s fully supported in a Hackintosh.

I ordered 32GB of RAM, given it’s relatively inexpensive and I didn’t want to worry about swap files.

Kirk used onboard video, but in my case, that wouldn’t cut it for X-Plane. I chose the Gigabyte GeForce GTX GV-N1080 ($550 on Amazon). This was the most expensive single item in my build, surpassing even the CPU in cost. But it’s a wicked-fast card that will run circles (in gaming) around anything Apple ships.

I’m using the on-board ethernet for connecting to my home network; the Wi-Fi card works, but I use it only for Handoff and Continuity, as this is a desktop machine that sits a few feet from my router.

Because I wanted room for more hard drives (so I could install an internal Time Machine drive, along with separate drives for Linux and Windows 10), I bought an Antec Performance Series Case P-100 which features seven internal drive bays, quiet design, and a very reasonable $80 price tag.

In total—excluding keyboard, mouse, and monitor—I spent $1,567 on parts. There’s not really a comparison to this machine in Apple’s lineup, thanks to the video card.

Kirk describes the process well, so I’ll just add that if you don’t enjoy working with small parts in tight, enclosed spaces, you probably won’t enjoy building a PC. But if you do like such things, building a PC is a rewarding experience: There’s nothing like that first boot to BIOS (a configuration system built into the motherboard) after powering on for the first time.

Kirk’s summary of the OS install is spot-on: It’s not plug and play, but getting macOS running isn’t overly difficult, to a point. That point is “macOS is installed and it works.” You’ll probably have networking and onboard video and maybe you’ll get lucky and have sound, too. And if your machine is a network server, like Kirk’s, that’s probably all you need.

But as I was trying to make my Hackintosh my every day Mac, I needed more. I needed Handoff and Continuity. I needed Apple’s native Messages support. I needed audio to work. I needed to be able to play iTunes protected videos. I needed sleep and wake to work. And the list goes on.

In the end, it’s these additional steps that will try your patience if you’re building a Hackinotsh that you want to be your do-everything Mac. Sure, there are theoretically solutions to all of these (and other) issues. The challenge lies in finding the right solution for your chosen hardware, then hopefully implementing it properly. If you do it right, you gain functionality. If you do it wrong, you probably boot to a black screen and may have to start all over. That happened to me three times.

While there were (and still are) many challenges with my Hackintosh, I did manage to create a very nice gaming Mac. First off, the machine is notably quieter than my iMac—none of my testing drove the fan noise higher than the background level, unlike my iMac. That may seem a minor thing, but fan noise is incredibly irritating.

And what about X-Plane? It doesn’t have a built-in benchmark, but it’s possible to display fps rates and output them to a data file. Doing that, and flying similar profiles with identically configured simulators, the iMac returns roughly 23 fps, against 39 fps on the Hackintosh.

That’s an improvement of about 70 percent, and it makes a ton of difference in the feel of the simulator.

After way too many hours of effort, I have given up on making my Hackintosh my every day Mac. I never got Messages working. My audio works until the machine sleeps, then it won’t work until I reboot. Sometimes the machine won’t even wake from sleep. Handoff and Continuity do work…sometimes (but hey, that’s no different than a “real” Mac!). I never got iTunes protected video to play. And on and on goes the list of “little things.”

Was the project a total failure? Not really—my Hackintosh is an excellent gaming Mac that runs X-Plane incredibly well. And because I bought a multi-drive case, it’s now capable of also booting (via separate hard drives) into two different flavors of Linux along with Windows 10. I’ve sold my old Windows machine, and when the Hackintosh isn’t X-Planing, it’s my Windows machine.

But it’s never going to be my everyday Mac. Come on, Apple, hurry up with those new Mac Pros!