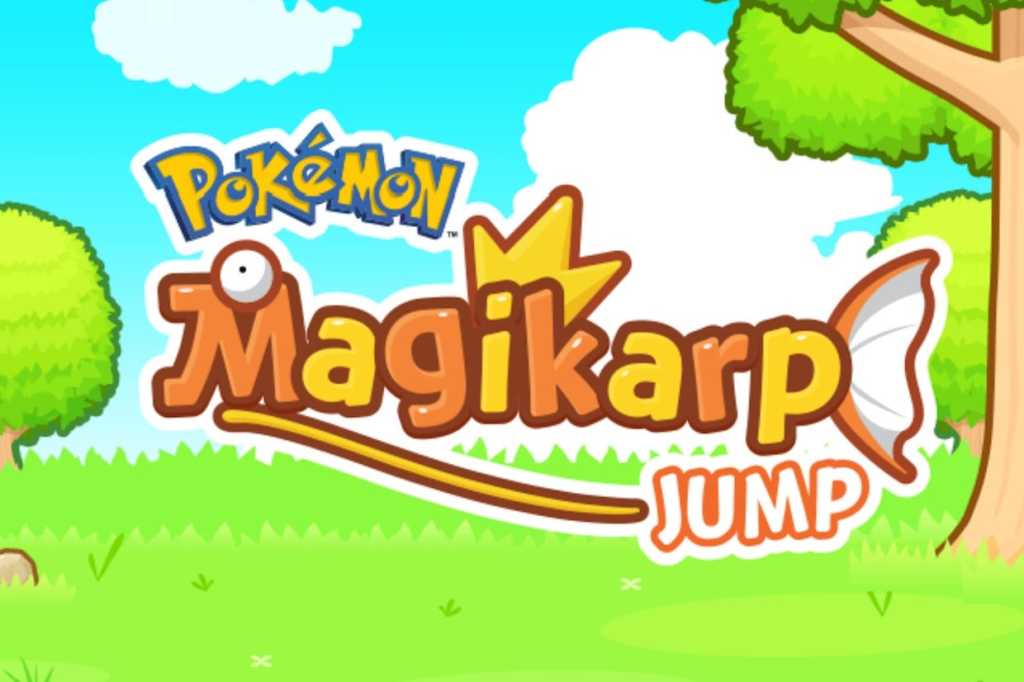 Of all the many hundreds of Pokémon available in the monster-catching franchise today, the lowly Magikarp remains one of the least appreciated. The dopey-looking orange fish have bulging eyes and slacked jaws, and really can’t do a whole lot. But they can jump, apparently, and it’s enough to earn the creatures their very own iOS game.

Pokémon: Magikarp Jump is in on the joke, clearly acknowledging how goofy it is that such a useless monster would have its own competitive game—but the competition isn’t very active. You’ll train the fish to jump and then watch the proceedings unfold after a tap, but even training requires zero interaction. It’s like a super-streamlined version of a “clicker” game, but even as a Pokémon fan, I found it overly simplified to the point of tedium.

Magikarp Jump gets off to a fun start, especially when the town’s mayor (named Karp!) tells you that their “Magikarp are more like Tragikarp these days.” The town’s awkward fish just aren’t holding their own in jumping competitions anymore, and it’ll be you, young trainer, that will guide them back to leaping supremacy in league after league.

And so begins the routine. You’ll tap on pieces of food in your tank to gobble them up, which boosts your power and helps you grow in size. Also, you’ll train to further improve your skills—but much like the jumping, that’s also just a matter of tapping a button and watching what happens. Even so, it’s funny to see your Magikarp flop furiously against a punching bag, and the colorful, cartoonish look is really endearing here.

Still, without any real in-game interaction, the actual jumping competitions turn tiring in a hurry. You’ll tap the button, see the fish leap into the air, and then find out which one ultimately leapt the highest. If it’s your fish, then you’ll continue on to the next battle and do it all over again. And if it’s the other fish, then you can go back to training—unless you’ve maxed out that Magikarp’s top level, in which case it automatically retires and you’ll start all over again with a younger fish.

This actually happens with startling frequency. Granted, over time, you’ll unlock Magikarp that can reach higher power levels, thus allowing them to notch better leaps and push ahead into tougher league battles. Still, having that hard cap on each Magikarp’s career really limits the fun, and just as you start making progress, you’ll have to start all over again.

And there are painful moments along the way, too. You’ll run into random encounters where you have a chance to take home some free coins or diamonds—or alternatively bring about your Magikarp’s untimely death. It’s true! I told my Magikarp to leap into a tree to snag an item, but a Pidgeotto swooped down and carried it away forever. It’s heartbreaking stuff. On the upside, however, I have a Pikachu hanging around my pool and giving my Magikarp occasional training bonuses, so you have to take the good with the bad.

Pokémon: Magikarp Jump is definitely repetitive, but at least the freemium model doesn’t push back very hard along the way. There aren’t any restrictions on basic play, so you can chomp up food and enter jumping battles as much as you want.

However, you are saddled with limits on training tokens: you can have up to three at a time, and they recharge at a rate of 30 minutes apiece. If you use them all, then you’ll have to wait for more or potentially spend currency to refill your supply. Likewise, there are league points that limit how often you can challenge opponents to jumping competitions.

As far as currency goes, Magikarp Jump proves to be pretty giving. You’ll earn coins here and there, which are used to enhance the benefits of food and training exercises, as well as unlock new forms of both other time. And then the premium diamonds (also awarded here and there) are used to buy an array of stuff, whether it’s pool decorations that provide perks, or special items used to lure support Pokémon near your pool to help with training.

That stuff comes gradually, but you can always spend on a big bundle of diamonds—but it’s not cheap. The diamond packs range in price from 50 diamonds for $1 to 2,150 diamonds for $35, and depending on what you buy, they may not go very far at all.

Wanting to get both a sweet background decoration and another helper Pokémon, I dropped a cool $20 on 1,200 gems—and immediately spent nearly all of them between a Bronze Eevee statue and a residency from a giant Charizard. Twenty bucks blown, just like that, on a couple of small visual perks that bring very minor, ongoing perks. I should have reconsidered.

Luckily, there was never a point in which it felt like I had to spent money to get ahead in Pokémon: Magikarp Jump. On the other hand, there was never a time in which I felt strongly motivated to either spend money or really try to get ahead, because the grinding cycle of making small progress and then starting over again just led to a sad malaise.

I still play Pokémon Go regularly and occasionally pop into Pokémon Shuffle for a few rounds, but even my love for the franchise couldn’t overcome my rapid exhaustion with Magikarp Jump’s limited routine. I’d love to see The Pokémon Company do more with the premise and give you more interactivity and variety along the way, but unless that happens, it has been a surprisingly short-lived distraction for this Poké-fan.