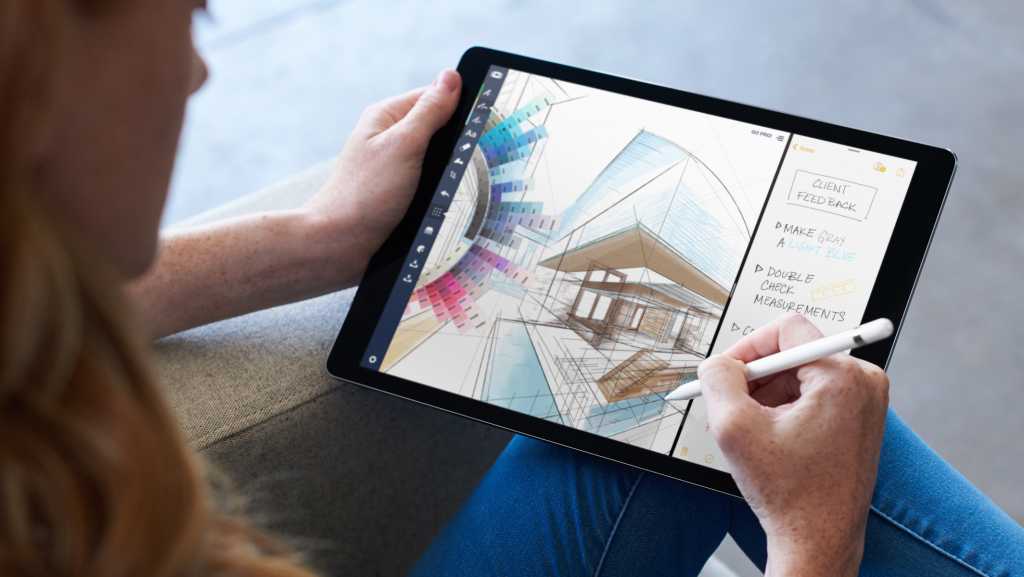 Ever since Apple added a giant screen, detachable keyboard and Bluetooth stylus to the iPad, the company has wanted us to think of it as a computer—a super computer, in fact, if you believe its advertising tagline.

But while it might have had the processing power and screen real estate of a MacBook, the iPad Pro was no more a Mac than any other tablet that came before it. While the Pro was certainly an upgrade over its predecessor, the iPad Air 2, it was still, at its core, just an iPad. The Smart Keyboard and Apple Pencil certainly made it more palatable to artists and writers, but the iPad Pro was still a far cry from a PC.

But the iPad has taken a big step towards​professional legitimacy. With a new model that clearly distinguishes itself from the $329 entry-level model and the transcendent multitasking and navigation features in iOS 11, Apple finally has a tablet strong enough to sit alone on your desk. And that’s bad news for the MacBook Air.

Letting the Air out

If you yawned at the wrong moment during the WWDC keynote last week, you might have missed the MacBook Air’s solitary mention. The first update to the ultra portable notebook in more than two years brought the smallest of changes: a 1.8GHz dual core Intel Core i5 chip to replace the 1.6GHz one, and twice as much RAM in the base model (8GB versus 4GB).

And that’s it. No Retina display. No USB-C. No battery boost. And no more 11-inch model. Apple phased out the smaller MacBook Air last year when it introduced its new Touch Bar MacBook Pros, and it’s pretty clear now that it’s gone for good.

So, it’s hard not to see the new 10.5-inch iPad Pro as a replacement for the smaller Air. It has everything we ever loved about the MacBook Air—ultraportability, performance, and all-day battery life—in a package that’s equally inexpensive. A 256GB 10.5-inch iPad Pro with 4GB of RAM, 256GB of storage and a Smart Keyboard will run $908, just a hair over the retired 11-inch model’s $899 price tag. The MacBook Air might technically still be the cheapest Mac, but for budget-conscious shoppers, the 10.5-inch iPad Pro will be hard to ignore.

To the untrained eye, the new iPad Pro might look a lot like the iPads of old. But like the MacBook Air, iPad refreshes never really bring the kind of sweeping changes that we see with the iPhone. And the differences between the 9.7-inch and 10.5-inch iPad Pros are much bigger than a set of slightly shrunken bezels.

With the new model, Apple has finally distinguished the iPad Pro. The biggest change is ProMotion, which automatically adjusts the refresh rate to 120Hz (up from 60Hz on former models) for smooth scrolling and better responsiveness. Couple that with the new A10X Fusion processor and you’ve a tablet that actually rivals the high-end MacBook Pro in raw performance.

Apple’s tablet no longer occupies the space between the iPhone and the MacBook. Even without a keyboard attached, the new iPad Pro is far closer to a macOS device than a typical iOS one, with powerful apps like Affinity Photo delivering desktop-caliber production and the new screen rivaling any of Apple’s portable Macs. Some people might say it’s too expensive for an iPad, but for the power, screen, and performance packed into it, the price is right on the money.

And the biggest enhancement, the one clearly aimed at ultimately replacing the MacBook Air, hasn’t even arrived yet.

iOS 11 is nothing less than a sea change for the iPad. While it already had system-level features that differentiated it from the iPhone—Slide Over, Split View, and Picture in Picture—the new iOS takes it to a whole new level, one that’s just a step or two away from the Mac.

While the icon grid remains for now, Apple has overhauled iOS in incredible ways in version 11. The most obvious change is with the overall interface. For the first time, the iPad has a macOS-style Dock, with space for 13 of your favorite apps rather than a mere 5. At the right side will be three “intelligently suggested” apps (recents, most used etc.), for a grand total of 16. There’s also a powerful new App Switcher that divides your open apps into individual spaces so you can quickly pick the one you want.

Then there’s a new Files app that feels more like a Finder than anything iOS has had before. It brings together your documents and photos from wherever they live, be it iCloud Drive, Dropbox, or Adobe’s Creative Cloud. Inside you can easily share and organize your files and tag them for easy searching. And you can even tap the dock icon to get a right-click-style preview of what’s inside.

But the coup de grace for the MacBook Air is drag and drop in iOS 11. When you boil it down, the main differentiator between macOS and iOS is the ability to quickly move files between apps and windows, and iOS 11 neutralizes that advantage in a big way. Now you can drag photos from your camera roll into an email. Or drag two with a second finger. Or drag something to an app icon, hover over it and watch it spring-load just like on macOS.

And that’s not to speak of the new Pencil tricks, QuickType shortcuts, and searchable handwritten notes. Put it all together and you’ve got the first iOS device truly built for Mac-caliber productivity. iOS 11 on the iPad brings many of the tools and features Mac stalwarts have been craving, and for many would-be MacBook Air buyers, the temptation might finally be too much to ignore.

Heir to the Air

If the iPad Pro’s new sleeve isn’t a homage to the manilla envelope Steve Jobs hid the original MacBooks Air in, then I don’t know what is. For the first time, the iPad Pro isn’t a companion or an afterthought. The inability to run macOS no longer makes the iPad Pro a lesser machine, and in some ways iOS 11 is a smarter, more modern version of High Sierra.

Of course, purists will forever argue that the iPad isn’t really a laptop, especially since Apple, like Microsoft and the Surface Laptop, isn’t bundling a Smart Keyboard with the iPad Pro. But as a lap-compatible device, iOS 11 makes the iPad Pro more powerful, more portable, and more versatile than the MacBook Air.

Now if only it would ship with a calculator app.