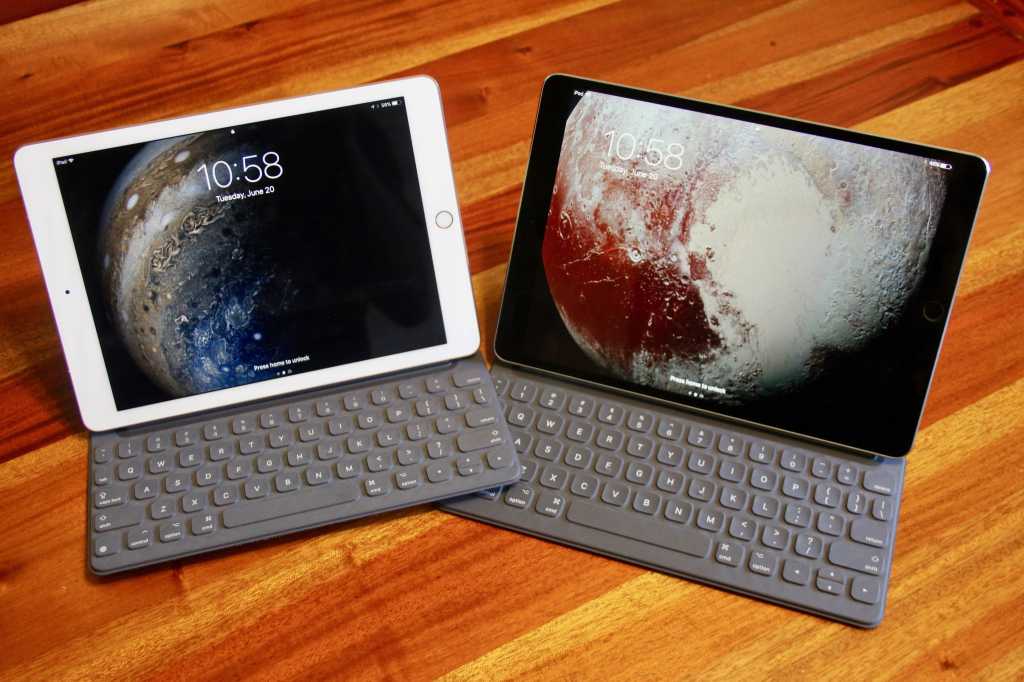 If there’s a defining quality to the iPad Pro, it’s that the device seeks to go beyond the traditional touch interface of iOS to seek out additional ways of getting work done. For people who are comfortable with pencil, pen, and paper, the Apple Pencil brings a new dimension to using an iPad. And for those of us who are most comfortable with a keyboard beneath our fingers, the iPad Pro—with its Smart Keyboard, the first Apple keyboard designed for iOS—was a sign that Apple realizes that sometimes, even an iPad needs to behave a bit more like a laptop.

There are probably innumerable reasons why Apple decided to expand the size of the second-generation iPad Pro, replacing the old 9.7-inch model with a new 10.5 one. But one benefit of the slight expansion—the 10.5-inch iPad Pro is 10.6 millimeters wider than the old model—is more room for typing, whether it’s physical keys on the Smart Keyboard or the virtual keys of the built-in software keyboard.

This doesn’t mean that all the keys on the Smart Keyboard are normal sized. Far from it. Most of the modifier keys and several of the non-alphanumeric character keys are extra narrow, in order to leave enough space for the alphanumeric keys. (Apple’s made one major change when compared to the 9.7-inch Smart Keyboard: The Tab key is a lot larger, at the expense of the right-bracket key. It’s a smart move, given that Command-Tab is a keyboard shortcut frequently used for app switching, a major focus of the iPad Pro in general and iOS 11 in particular.)

Yes, the keyboard on the 12.9-inch model is much more spacious than on the 10.5-inch one, but it’s also heavier and bulkier. I don’t carry around the Smart Keyboard for the 12.9-inch iPad Pro because of the added bulk; it’s much less of a big deal for the 10.5-incher.

A better software keyboard, too

While the increased physical dimensions of the 10.5-inch iPad Pro improve the hardware keyboard, the bigger screen improves the device’s software keyboard—simply by providing more space on the screen for your fingers to land. On the 9.7-inch iPad Pro, every keycap was roughly 150 by 150 pixels; on the 10.5-inch model, the entire keyboard stretches, making each key 175 pixels wide—roughly a 15 percent increase in surface area.

That’s a good start, but with iOS 11, things get even better. The new standard keyboard will let every key perform double duty. If you tap and then pull down a little bit with your finger on a key, you’ll type an alternate character. For example, flicking down on the h and j keys generates parentheses; flicking down on the top “qwerty” row types numerals. This dramatically reduces the amount of time you’ll need to flip over to a second keyboard full of numbers and symbols.

This feature, called Key Flicks, will take a little getting used to, but it should really improve typing speed on the iPad Pro. Which is good, because this is one of those areas where the 12.9-inch model has been way ahead: Because of its larger screen, the software keyboard on the 12.9-inch model is itself full-sized, with an extra number row at the top of the screen to boot. The 12.9-inch model doesn’t even need Key Flicks, so it won’t get them when iOS 11 arrives.

If you’re someone who writes and desires the ultimate in portability, the old 9.7-inch iPad Pro with Smart Keyboard was a pretty good device. The 10.5-inch model is ever so slightly larger, but that size gain makes it a much better device for typing—whether you’re putting your fingers on glass or flipping around the Smart Keyboard and typing at full speed.